The Egyptian military coup that overthrew Egyptian President Mohammed Morsi is a blow to Turkey’s regional strategy under the AKP government. 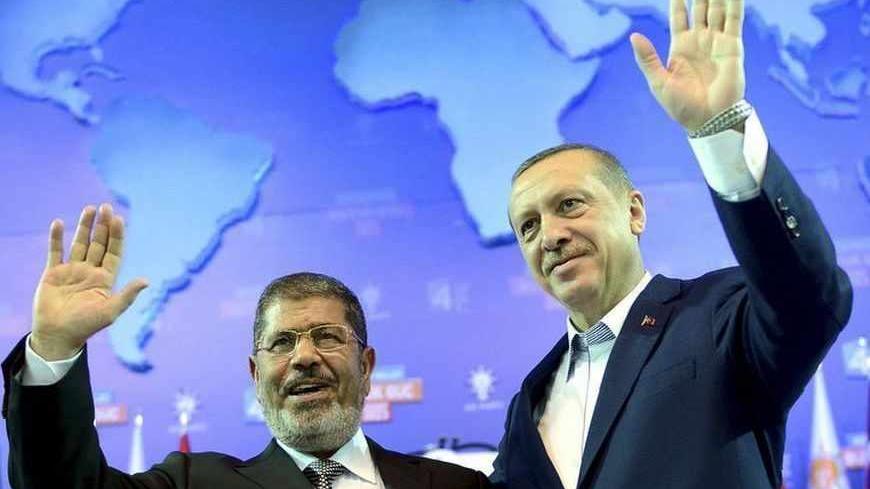 Either the Islamists ruling Turkey believe that the military coup that toppled Egyptian President Mohammed Morsi was also against them, or they are trying hard to give that impression to outside observers. It really doesn’t make a difference which scenario is correct since it is all about a perception of feelings. Both produce the same results.

There's no doubt that the Justice and Development Party (AKP) rulers, followed by the Islamists of the Gulen Movement, wanted to share the victimhood of the Egyptian Muslim Brotherhood. Victimization is something that Turkish Islamists badly need to exploit nowadays.

Their first reaction to the societal explosion of Gezi Park in Istanbul, which the government provoked with police violence, was to craft the perception that this was an international plot against the AKP government. They painted themselves as the victims in an attempt to delegitimize the protests. No doubt victimhood was a deterrent against those who wanted to debate the deeds and mistakes of those presumed to be have been victimized.

Following the July 3 coup, Turkish Islamists tried to create the same effect for the Muslim Brotherhood by using social media. To debate Morsi's mistakes, they strangely reasoned, was to legitimize the coup.

For example, Hatem Ete, director of political research at the Foundation for Political, Economic and Social Research (SETA) that is close to the AKP, tweeted on July 4: "The military provoked by seculars and liberals staged a coup in Egypt. Colleagues are writing and debating Morsi’s mistakes. Isn’t that reminiscent of Gezi (Park)?’’

The effort to capitalize on the victimhood of the Brotherhood was reflected in another tweet by Ete on the same day: “What was attempted in Turkey (a coup) succeeded in Egypt. The street politics of the secular segments against the ballot box freed themselves from an Islamic government but at the cost of a military regime.”

The Islamist government of Turkey has suffered a major loss with the coup in Egypt. Morsi and his Muslim Brotherhood government were strategic partners of Turkey's AKP in terms of economic and political relations. By transferring the political experience in democracy and elections process by its reformed "moderate Islamist’’ rule in Turkey to Egyptian Brotherhood, an important "brotherly force,’’ AKP was boosting its own soft power.

That wasn’t all the soft power Turkey transmitted to the Brotherhood's Egypt. With an October 2012 agreement, Turkey extended a $1 billion, five-year credit to Egypt that did not require repayment for the first three years. Turkey's granting this $1 billion credit, just as Egypt was struggling to obtain a $4.8 billion credit from the International Monetary Fund, indicated the importance that Turkey placed on Egypt.

Not only that: Egypt, with its Muslim Brotherhood government, was the most important element of a “new order” that Turkish Foreign Minister Ahmet Davutoglu was claiming to spearhead in the Middle East. This is why we have to say that the coup in Egypt truly had an earthquake effect on the AKP government.

Prime Minister Recep Tayyip Erdogan interrupted his summer holiday and immediately returned to Istanbul to hold an emergency meeting with cabinet ministers to assess the coup.

As a result of the coup, Erdogan has indefinitely postponed his scheduled July 5 visit to Gaza. Since the eruption of the Gezi Park protests, Erdogan has not been as pro-active in his politics and a vital determinant of the agenda of his country as before. The Turkish prime minister, instead of steering the developments in his country, is in a reactive position and wants to free himself from that position.

To restore his position affected by nationwide protests directly targeting himself he was intending to stage a classic pro-Hamas move that would be designed for local political consumption.

Erdogan must have been feeling such heavy pressure that he reneged on the accord he had reached with President Barack Obama in their White House mid-May meeting that if he were to go Gaza, then he would stop by at Ramallah. In a way, Egypt's coup stopping Erdogan's trip to Gaza has helped prevent the deterioration of his relations with Obama.

During Erdogan's September 2011 tour of Arab Spring countries like Egypt, Libya and Tunisia, he recommended secularism at each stop. Nobody listened to his well-placed suggestions in Egypt. He didn’t make that recommendation a part of his political narrative and he did not abide by his own advice in his own country.

If he hadn’t deviated in his own land from secularism, there wouldn’t have been a Gezi Park uprising.

In a nutshell, this is a summary of what happened in Egypt and Turkey: The Islamic references of AKP and the Brotherhood were not enough to govern their countries' vastly complex and diverse societies. They had to make use of foreign references that were alien to their political cultures, such as pluralism and participation.