AKP claims God is on its side

Liberals and others should be concerned about AKP rhetoric proclaiming that God, the nation and history is on its side and that a vote for an opposing party is the mark of an infidel. 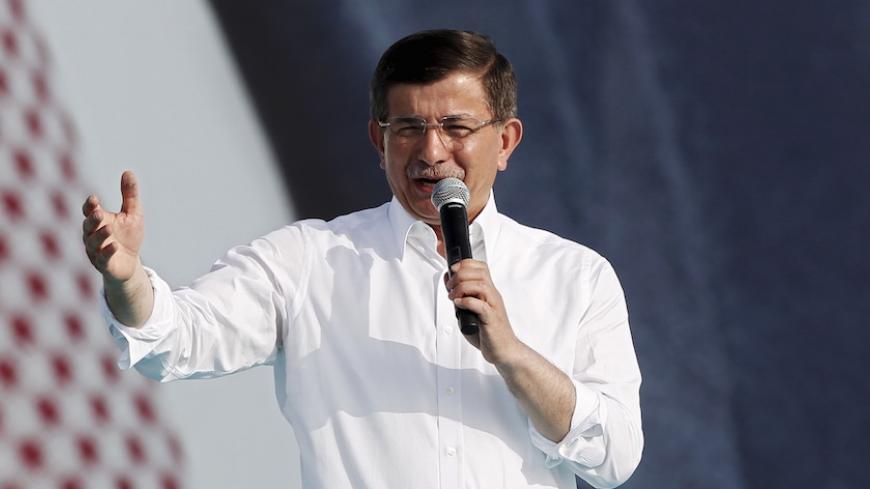 In the run-up to the June 7 general elections, Turkey's political scene has become tense and loud. The opposition parties are doing their best to advance their campaigns, and the ruling Justice and Development Party (AKP) is especially doing well, in part thanks to the unlimited state resources at its disposal. Meanwhile, the AKP's political narrative, which in the party's earlier years was embracing and cheerful, has become increasingly divisive and strident.

Prime Minister Ahmet Davutoglu recently presented an interesting example of this latter-day AKP narrative. In a speech to supporters in Denizli province and in other instances, he proclaimed, "God, the nation and history are with us." This trilogy, although admittedly poetic, is also emblematic of why and how the AKP narrative has gone wrong, at least from a liberal perspective.

Let's begin with the first element of the trilogy, God. To claim that "God is on our side" has been typical of most religions and sects throughout history, but it is different when a political party makes the same claim. Religions and sects are, by definition, faith-based communities, whereas political parties are supposed to be temporal organizations. Thus, a party's assertions should be based on empirical facts. When a political party claims, "We have reduced unemployment," it makes a statement that one can verify by looking at labor statistics, but there is no way to verify that God is on a party's side.

The problem here is not just "too much religion in politics," as secularists would argue. Rather, it is the exploitation of religion for political gains. Admittedly, religion is an attractive resource to exploit. Stating that "God is on our side" implicitly means that the other political parties are pitted not only against the party, but against God as well. No wonder a popular pro-AKP commentator declared, "Those who do not vote for Erdogan are nonbelievers," and an AKP voter claimed, "It is [religiously] obligatory to vote for the AKP. Those who do not will be infidels."

Is it possible to refer to God in politics without exploitation? Arguably, yes. For example, instead of claiming, "God is on our side," one could say something along the lines of what Abraham Lincoln reportedly said during the US Civil War: "Sir, my concern is not whether God is on our side; my greatest concern is to be on God's side."

The difference between the outlook of the AKP and Lincoln involves a self-righteous reference to God and a self-critical reference to God. The AKP's religious narrative appears to be of the former.

The second element in Davutoglu's trilogy, the nation, also reveals a fundamental problem in the AKP narrative. It simplistically assumes that the AKP's electoral victories imply that the nation, the entire nation, backs the party. Consequently, opposition parties are accused of going against the "national will," making them opponents of the nation, if not traitors. It is majoritarianism at its bluntest.

Deep down, this nation-claiming majoritarianism seems to be guided by the traditional Islamic concept of the nation ("millet"), the community of Muslim believers. In its AKP version, this community of believers constitutes the party's supporters, while others are the much-despised and constantly humiliated "White Turks," leftists and Kemalists, who are all corrupted by Western culture. AKP ideologue Etyen Mahcupyan recently presented a polished version of this argument in writing that the AKP's vision is more "authentic" than those of other segments of society.

The liberal alternative to AKP majoritarianism, of course, would be to consider all political and cultural trends in Turkish society as equally legitimate and to see "the nation" as their pluralistic sum. Although the AKP paid lip service to this liberal view in its earlier years, it soon introduced its monist view of the nation, which is a mirror image of the monist version of the nation that its Kemalist predecessors imposed for decades.

The third element in Davutoglu's trilogy, history, is also deeply troubling from a liberal point of view. The problem is not a mere interest in history or an attempt to be "on its right side," but a sense that history has a direction that culminates in one's political project. Karl Popper, a great liberal thinker of the past century, noted this ideological problem in his magnum opus, "The Poverty of Historicism." Accordingly, totalitarian ideologies, such as Marxism, are based on the dogma that history has an inevitable and deterministic pattern. The logical consequence is that those who realize and advance this pattern have the right to rule. Such historicists, Popper observed, often require the "remodelling of man" to make him fit for the future society or to hasten the society's arrival.

The AKP narrative is not as complex as Marxism, but it does possess some elements of the historicism Popper observed among Marxists. We are repeatedly told that the AKP is the vanguard of a "historic transformation," "closing a century-old parenthesis" in Turkey by ending Kemalism and the "Sykes-Picot order in the Middle East" by spearheading its own "model" in the Arab world. In these extraordinary times, liberal rantings about press freedom and rule of law are trivial matters that do not need to be taken into account. Revolutions, after all, create their own law rather than obeying the rule of law, as the former Marxist Mahcupyan lectures to us.

This is the scene set by the ideological narrative of the AKP in the run-up to an election that the party sees as, guess what, "historic." If the AKP wins 330 of the 550 parliamentary seats, it will have a mandate to draft a new constitution, in short, to give President Recep Tayyip Erdogan the unlimited and unchecked powers to continue his "revolution." This self-righteous ambition should give any liberal a deep sense of concern.