The Turkey-Saudi axis against Damascus

Will the US support the gains of Islamist opposition in Syria? 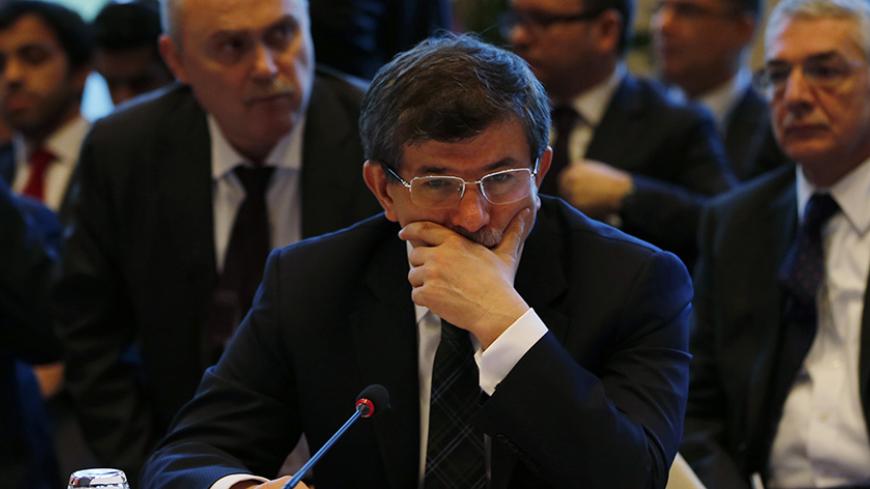 Turkish Prime Minister Ahmet Davutoglu visited Syrian territory uninvited last weekend. While he was foreign minister, and before that, chief adviser to then-Prime Minister Recep Tayyip Erdogan, he used to boast of having visited Syria more than 60 times and seeing President Bashar al-Assad and his counterpart Walid Moallem more often than he had seen his own wife and children. Davutoglu was justifiably considered the architect of Turkey’s new opening to the Middle East and the backbone of the policy he dubbed “Zero Problems with Neighbors” was the rapprochement with Syria.

That was before relations soured and turned into animosity by the end of summer 2011. Davutoglu's last visit to Syrian territory was not official. He took time during his election campaign in the border province of Urfa to visit the Suleiman Shah mausoleum, now in its new location in Syrian territory a short distance from the Turkish border. Putting his feet on Syrian territory aroused protests from the Damascus regime. As the Turkish government declared the Syrian regime “illegitimate,” that regime’s claims on the “illegality” of Turkish leaders’ acts do not resonate in Ankara at all.

There has been widespread speculation in Turkey itself that Turkey, in alliance with Saudi Arabia, is preparing to move into Syria militarily to create a “buffer zone” that would enable the training and equipping of the Syrian opposition within Syrian territory.

Moreover, such a move could hasten the downfall of a regime; this looks more plausible than ever after the fall of the provincial center Idlib and the strategically important town of Jisr al-Shughur.

While in Syrian territory, Davutoglu ruled out the possibility of a Turkish military incursion in Syria as "speculative." But he emphasized that the balance of power in Syria is rapidly changing. Referring to latest advances of rebel forces, he said Latakia is now under the pressure from the opposition. He accused the regime of leaving the east of the Euphrates River to the Islamic State (IS), while bombing other opposition forces. He said this indicates the Assad regime's strategy: abandoning the defense of Syria and instead concentrating on the coastal region where Nusayris (a pejorative denomination used for the Syrian Alawites) live.

“Nevertheless,” he added, “the regime is bleeding despite the assistance of Iran and Russia.”

Erdogan and Davutoglu apparently are emboldened by the latest opposition gains in Syrian territory near Turkey’s Hatay province. Idlib has become the second provincial capital that the regime lost control of, following Raqqa, which was lost to rebel forces more than two years ago, and then fell into the hands of IS. The loss of Idlib may be more important for the regime because of its proximity to its nerve centers.

The loss of Jisr al-Shughur, a district of Idlib, is even more important. Joshua Landis, a Syria expert in the United States, said: “This was a big loss. It is of immense strategic value — much more so than Idlib, which was surrounded by a sea of opposition-controlled territory. Jisr guards the Ghab valley, the back door to Hama; it also stands at the entrance to Latakia, which is some 45 miles [72 kilometers] away. It is right along the Turkish border and cuts the main road from Latakia to Aleppo. The regime is making a big push to retrieve the city.”

Apparently, the opposition's latest gains are seen as the outcome of the newly emerging axis of Turkey and Saudi Arabia. Both Sunni powers had fallen out and confronted each other because of the removal of the Muslim Brotherhood-led government in Egypt. The Saudis were supportive of the ouster, while Turkey adamantly upheld the banner of the Muslim Brotherhood in Egypt.

After the death of King Abdullah and the reshuffle in the Saudi leadership, circumstances changed. The new leader, King Salman bin Abdul-Aziz Al Saud, obsessed by an alleged Iranian threat and developments in Yemen, set out to form a new Sunni alliance against Tehran.

A credible US source told me that Qataris brokered the rapprochement between Turkey and Saudi Arabia. The immediate impact of the trilateral axis apparently has been reflected on the battleground in Syria by the advances of the opposition forces at Idlib and Jisr al-Shughur.

The latest military situation in Syria brought two interconnected questions to the fore:

Erdogan sounds vague on these issues. Speaking to journalists on his way back from Germany and Belgium, he confirmed the cooperation of Turkey with Saudi Arabia and Qatar in assisting the Syrian opposition and from his wording, it could be assumed that Turkey and the United States are not completely on the same wavelength on issues such as a no-fly zone, security zone (buffer zone) and even on the train-equip program. “On all these, the trajectory will be clearer during the months ahead,” he said.

Hurriyet Washington correspondent Tolga Tanis, in his weekly column under the headline “The disinformation on Syria,” referred to a high-level source at the Pentagon who told him, “For the US, the priority is ISIS [the Islamic State]. But for the Turks, the priority is removing the Assad regime. If these differences remain as is, the train-and-equip program in Turkey may not start.”

For Turkey, the Syria policy is a “zero-sum game.” For the Erdogan-Davutoglu team, they cannot reconcile themselves with anything short of seeing the regime in Damascus gone. To that end, Turkey has become a strong supporter of the Army of Conquest that defeated the regime forces. That front mainly consists of al-Qaeda’s Syria branch Jabhat al-Nusra and the jihadist group Ahrar ash-Sham. Turkey’s support for and benign attitude toward the latter is an open secret.

The Turkish-Saudi alliance cemented by Qatar that has transformed itself into heavy support for the actions of Jabhat al-Nusra and Ahrar ash-Sham may produce certain battlefield advantages for the non-IS Islamist opposition in Syria, but unless it's fully endorsed by the United States, it's far from certain to bring the regime down.

“The regime still has punch left in it, and the rebels are far from Damascus. Of course, if the Saudis and Turks are willing to send a lot more money and weapons, the rebels have numbers on their side. Their best strategy is the war of attrition. But the regime continues to maintain the upper hand today. It has an air force and more armor. Iran and Russia have made no indication that they are giving up the fight or willing to throw Assed overboard. Losing Assad and his regime would be a tremendous blow to both. They can also play the long game. Saudi Arabia with its new king and 30-year-old defense minister is not a combination one would want to bet on for the long run. The war in Yemen may be popular in Saudi Arabia today, but it will be disastrous for the new king in the long run. His opponents, who have been pushed from power, will come out of the woodwork when Saudis sour on it. We are far from an endgame.”