Russia weighs in on Yemen

After Russia's shift to soft power in the Middle East, President Vladimir Putin discusses Russia's "need to abandon ‘the law of the strongest’ and ‘rule of the fist.’” 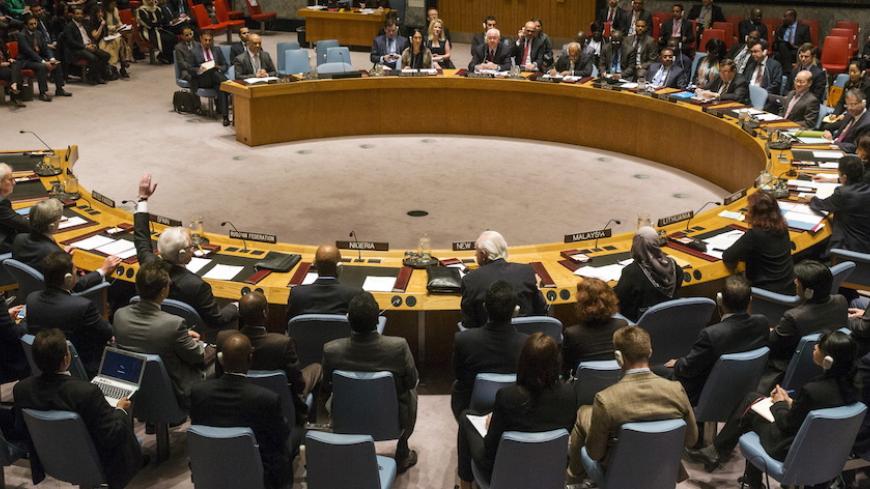 Russian Ambassador to the United Nations Vitaly Churkin abstains from a vote in the UN Security Council attempting to halt the escalating conflict in Yemen, April 14, 2015. - REUTERS/Lucas Jackson

Russia is investing enormous resources in soft power and specifically in what Americans call public diplomacy in the Middle East and worldwide. But is it working? The results in Yemen, and earlier in Syria, suggest otherwise.

Beyond words, Moscow has acted essentially altruistically in certain narrow circumstances, as in the Russian navy’s April evacuation of over 300 civilians from Yemen. According to press reports, only 45 evacuees were Russian — most were Yemenis. Interestingly, some 18 were Americans, leading US Secretary of State John Kerry to thank Russian Foreign Minister Sergey Lavrov during a telephone conversation, according to a Russian Foreign Ministry statement. (When questioned, US State Department spokeswoman Marie Harf appeared surprised by this, but thanked Moscow herself.)

Yet, few in the region or elsewhere argue that Russia’s public exhortations contributed to the cease-fire or, for that matter, give Russia credit for seeking it. On the contrary, most view Russia’s diplomacy as self-serving.

The reason is quite familiar to Americans: charges of hypocrisy. Rarely a day passes when someone somewhere does not accuse the United States of saying one thing and doing another — especially in the Middle East, but also in many other places around the world. Moreover, this criticism is not always without foundation. As America’s former Ambassador to the United Nations Jeane Kirkpatrick wrote in 1979, “Inconsistencies are a familiar part of politics in most societies. Usually, however, governments behave hypocritically when their principles conflict with the national interest.”

Today, Putin himself often charges the United States and Western governments with hypocrisy and double standards, as he did in a recent press conference with German Chancellor Angela Merkel during her May visit to Moscow. In that case, Putin drew attention to the fact that “a coup took place [in Yemen] and the president stepped down” and that “other countries, with which Russia has good relations, want to return him to power.” However, he said, in Ukraine there was “all manner of support for those who carried out the coup” against former President Viktor Yanukovych.

Putin added, “If we apply different standards to the same kind of events, we will never be able to agree on anything,” and, without irony, to say that “we need to abandon ‘the law of the strongest’ and ‘rule of the fist.’”

From one perspective, Russia’s policy in the Middle East is fairly consistent — Moscow seeks stability and peace in the region, and views strong governments as best guarantors of both. On the contrary, Russia’s conservative conventional wisdom holds, weak governments can lead to ungoverned spaces or even failed states where extremism and violence rule. Thus, the Kremlin opposed the 2003 US intervention in Iraq and has more recently argued against arming Syria’s opposition, much less direct US or Western attacks on Bashar al-Assad's military forces.

Yemen is a somewhat complex case, in that Russia’s opposition to Saudi-led airstrikes is de facto support for Houthi insurgents rather than the ousted Yemeni government. In this case, Moscow appears to see the Houthis as the best bet to re-establish order and, accordingly, opposes outside intervention that may prevent or delay this. Just two years ago, however, Putin told President Abed Rabbo Mansour Hadi that “Russia will do everything in its power to help and support you.”

Russia’s position on Libya is perhaps the exception that proves the rule: when then-President Dmitry Medvedev ordered Russia’s diplomats to abstain in a UN Security Council vote that facilitated airstrikes, his then-Prime Minister Putin publicly disagreed. Putin’s comments in the aftermath of the attack on the US diplomats in Benghazi in the fall of 2012 provide one of the clearest explanations of his thinking, and are worth quoting at length.

“In recent years, we have had many differences in opinion with our American partners specifically on the ways of resolving problems in troubled countries. We share the principles of democracy and freedom, and agree that many regions throughout the world have numerous political regimes that do not follow these standards.

"The difference in approaches between ourselves and our American partners lies however in the fact that we believe these types of problems should be resolved through difficult but nevertheless peaceful negotiations and lead to positive, long-term-oriented results, to ensure the positive development of those nations and the safe coexistence of all faiths, religious groups and ethnic groups in those countries. This is a difficult, painstaking process that requires patience and professionalism.

"We do not support any armed groups that attempt to resolve internal problems through force because we usually can not clearly understand the ultimate goals of those individuals and hence we always have a disturbing feeling that if such armed groups get support from abroad, the situation can end up in an absolute deadlock. We never know the end goals of these “freedom fighters” and we are concerned that the region could descend into chaos which, indeed, is what is already happening."

The problem with this approach, of course, is that the “painstaking process” of “peaceful negotiations” is possible only when governments agree to negotiate. This creates a significant tension in Moscow’s position, which inherently and rather substantially privileges governments at the expense of dissatisfied social groups. Moreover, Moscow is quite prepared to support governments like Assad’s in Syria in brutally suppressing internal dissent. Observers in the Middle East and elsewhere see this — and see Moscow’s repeated vetoes in the Security Council and its military assistance to the Assad government — and inevitably draw their own conclusions about Russia’s motives and principles.

After the events in Syria, it's hardly surprising that Moscow’s soft power and public diplomacy have only limited impact — a 2014 Pew Research Center poll found a median 68% unfavorable view of Russia in Middle East countries surveyed. In Egypt, Jordan and Turkey, over three-quarters of respondents had “no confidence” in Putin.

As the United States has discovered, it takes much more than spending money on government-sponsored media to solve this.