In their first meeting since the downing of a Russian jet in September 2018, Russia's president and Israel's prime minister carefully reaffirmed their strained ties. 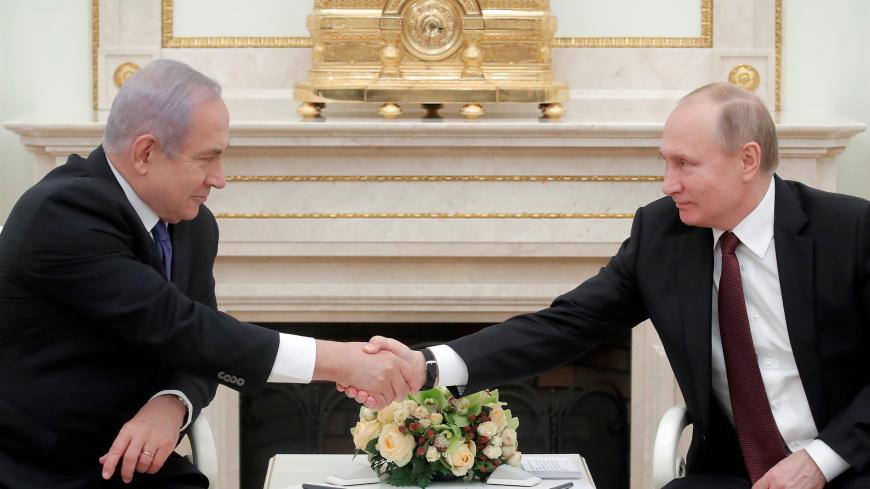 Putin and Netanyahu met briefly in November in Paris on the sidelines of the conference commemorating the 100th anniversary of the end of World War I. As the issue continued to erode the bilateral relationship, Netanyahu continued to seek a full-fledged encounter with Putin that eventually ended in the agreement to host the Israeli leader in Moscow on Feb. 21. Netanyahu had to delay the visit over the need to deal with the emerging centrist coalition at home but ultimately made it to the Russian capital a week from the originally scheduled date. The visit hence acquired a clear-cut domestic angle with Netanyahu trying to make the most of this trip both in terms of PR appeal with a series of tweets from Moscow and in terms of the message he conveyed to the Russian president.

Putin played along. The meeting was expected to signal the relationship survived the worst stress test Russia and Israel have experienced in recent years and Putin's very first sentence welcoming the Israelis showed Moscow was ready to turn the page.

“We have been planning this meeting for some time. Life moves forward and requires consultations at the top level. Our bilateral trade is increasing. It is not very large in absolute figures but the trends are positive. And, of course, it is very important to discuss the situation in the region and security issues,” Putin briefly remarked.

Netanyahu replied, “Mr. President, I counted and apparently we have met 11 times since December 2015. I think there is a direct link between us. Our contact is a very important element that has ensured a lack of problems or any clashes, as well as stability and security in our region.”

The issue of Iran — its regional ambitions and proxies in Syria and Lebanon — has dominated all of the 11 times the two leaders met as well as countless military and intelligence contacts between Russia and Israel. This visit was no different.

Netanyahu stressed that angle in the Israeli agenda for the talks, saying, “The biggest threat to the region’s stability and security comes from Iran and its allies. We are doing everything we can to prevent this threat from being translated into reality. We will not allow Iran to do what it talks about — that is, to destroy us — and we will act accordingly.”

The Israelis reportedly brought updated maps of Iranian positions in Syria to show the Russians. This is an important point since a good portion of the discontent between Moscow and Tel Aviv is over Israeli strikes on what it deems Iranian and proxy deployments and infrastructure. On Jan. 23, Russia’s Foreign Ministry spokesperson stated, “The practice of dealing arbitrary strikes on the territory of a sovereign state (Syria in this case) must be ruled out.”

The strikes put Moscow in an uneasy position vis-à-vis Damascus and raise Syrian complaints over Russia’s inability to deliver on its allied commitments to defend Syria from foreign aggression.

Russia and Israel, in turn, have allegedly had their own agreement under which the Israeli strikes would not threaten Assad, while Russia is believed to have promised to curb Iranian influence near the Israeli border. In this sense, Russia tacitly grants Israel leeway to provide its own security yet has to publicly castigate Tel Aviv for “illegitimate strikes,” as Deputy Foreign Minister Sergey Ryabkov put it.

The understanding, however, was shattered by the incident with the Russian spy aircraft and distrust rose within the Russian military. Some Moscow-based military sources Al-Monitor spoke with at the time even claimed they found coordinating in Syria with Hezbollah and Iranian militias more “trustworthy” than with an “American ally.” Yet, Putin himself advocating broader dialogue with Israel left the Russian military no option but to continue on the agreed deconfliction.

The inner circle of Netanyahu’s Russian-speaking aides and ministers have long known the important levers to pull in Putin’s psyche. In order to reset the “political contract” on Assad and Tehran and restore trust in coordination with Israel, Netanyahu not only once again emphasized “the great role Russia and the Red Army played in defeating Nazism” but invited Putin to the opening of a special Jerusalem monument devoted to the victims of the siege of Leningrad. A prolonged military blockade undertaken by Nazi Germany against the Russian city of Leningrad — today Putin’s native St. Petersburg — is one of the greatest tragedies in Russia’s World War II history. The siege lasted 872 days — one of the longest and most destructive sieges in history — and estimates of the dead, most starved to death, vary from 630,000 to 1.5 million people.

The Israeli initiative to build a monument to this historical event was greatly appreciated by Russia and there was no way Putin would decline the invitation.

In addition to stressing important elements of joint history — emphasizing common ground in the face of some historical events over which Russia and Iran are still at odds — Netanyahu praised the contribution of Russian-speaking Jews to what he called “wonderful bilateral relations” between Russia and Israel and attributed to over a million Russian-speaking Israelis that “tourism between our countries has reached record figures: Every year over 400,000 Russian citizens visit Israel and about 200,000 Israelis go to Moscow. I also contribute a bit to this statistic,” he joked.

“I would like to pay tribute to the Israelis — 1.5 million descendants from the former Soviet Union made a substantial contribution not only to the development of Israel but also to the birth of the Israeli statehood and are now playing a very important role as a bridge between Russia and Israel. We not only remember them but we also appreciate the role they play today. Of course, Israel is their home country, obviously, but we also call them our compatriots,” said the Russian president.

It's unlikely that Putin was swayed by Netanyahu’s carefully worded appeals to what he deems sacred to Russia and himself personally but the intent was definitely much appreciated. What made a reset possible, however, was his own belief that the relationship with Israel is one of the pillars of Russia’s success in Syria. Thus his line that “life moves forward and requires consultations at the top level” is an uneasy recognition of the situation on the ground, though the 15 Russians lost in the September incident are a painful reminder of the turbulent nature of the Middle Eastern turf and a warning that even best deconfliction agreements may fail.

Putin never mentioned the Iranian factor in his public deliberations with Netanyahu — keeping conflicting partners compartmentalized and remaining mindful of their sensitivities to Moscow’s contacts with their opponents is a fine thread to walk. Whether the two really reached a new agreement on Iran and whether Israel secured a new concession for its strikes in Syria will likely be revealed from practical actions of the engaged parties. The two parties seem to have put the bilateral crisis behind them, but the fallout still needs time to fully settle.