Al-Monitor interviewed the Libyan undersecretary of the Information Ministry, Haitham al-Hadi Kamouka, who talked about some countries’ attempts to divide Libya into three states. 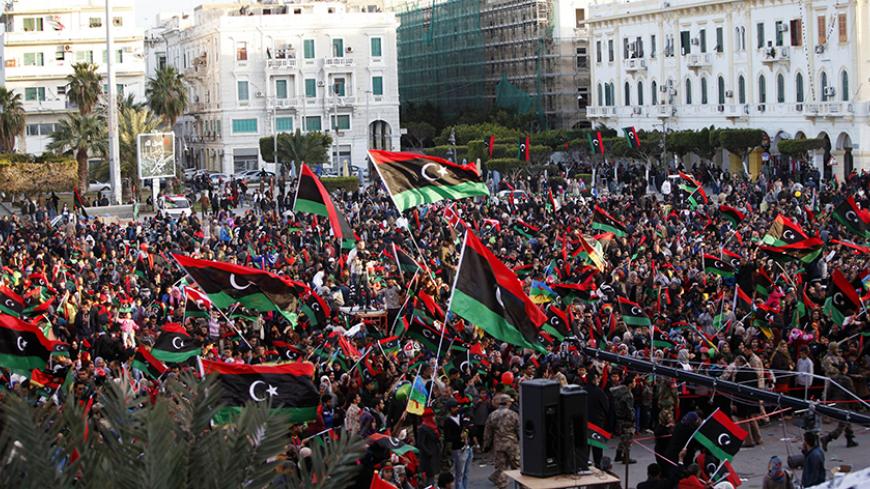 Libyans celebrate the fourth anniversary of the revolution against Moammar Gadhafi at Martyrs Square in Tripoli, Feb. 17, 2015. - REUTERS/Ismail Zitouny

BEIRUT — Haitham al-Hadi Kamouka, the Libyan Information Ministry undersecretary — that is, the minister of the governing entity in Tripoli, Libya — visited Beirut on May 12-16 to meet with Lebanese officials. He came to convey his government’s view of the ongoing conflict in Libya. While here, he also issued a call to reporters to visit Tripoli. Al-Monitor met the minister to discuss the current situation and obtain some background on the major crises plaguing his country, many of whose citizens feel neglected, for more than four years now, after the revolution they and the world believed to be a success.

Kamouka explained that among the competing political actors, the National Salvation Government — which holds northwestern Libya, and of particular importance Tripoli Province, site of the capital — controls the largest amount of Libyan territory. Another force controls Cyrenaica in the east, including its capital, Benghazi, while in the south armed tribal forces, most prominently the Saif al-Nasr (historically known to cooperate with the French), control the Fezzan and its capital, Sabha.

Kamouka said, “The revolution that triumphed over the former dictator, Moammar Gadhafi, originally inherited the remains of a state. Libya lacks a state structure. It has no economy and no society. The only state apparatus was the police, and oil revenues were directly diverted to the leader, who distributed them to his subjects to ensure their silence and loyalty.”

The fundamental obstacle facing his government, Kamouka contends, is how to reorganize the public sector. “The government found that Gadhafi made more than a quarter of Libya's population into government employees to buy their loyalty and bribe them with high salaries in return for doing nothing,” he said. More than 1.5 million Libyans out of some 6 million total worked for what was called at the time the “State of Gadhafi.” The annual budget for government salaries exceeded $8 billion, which, according to Kamouka, still failed to buy an effective public sector or state.

He added, “For example, our government found out that we have half a million teachers [supposedly working] in public schools, most of which are nonexistent and without students. This was part of a network trying to subordinate people to the ruling power and to ensure their loyalty. We discovered that a large number of these employees were registered as civil servants in more than one job in order to receive more than one salary from the Libyan state. We realized that what sustained the power of the dictatorship was the corruption of those benefiting from it. We discovered a case where one person was receiving 52 salaries from 52 different government departments, claiming to be an employee in all of these departments, while in reality he did not work in any of them.”

Kamouka said, “We are witnessing a high unemployment rate, although we managed to reduce the number of public sector employees to 800,000 people, which is still high. This was the first step toward the reorganization of the state and the restructuring of its administration.”

On the other hand, the Libyan said, there is no fear concerning the country's economy, because Libya has abundant wealth in resources, including oil, metals, agriculture and tourism infrastructure and major historical monuments. He also explained, “Being the closest country in North Africa to Europe, Libya has a strategic position allowing it to play an extremely important economic role between the two shores of the Mediterranean. However, Libya's resources and location have indisposed it for four years and more.”

He believes that because of Libya's assets, certain foreign forces have ambitions in his country. “Libya is historically known for being divided into three regions. Historically, the French had influence over the southern Fezzan province, and France is today trying to restore this influence,” Kamouka said. His government believes France is seeking to undermine the unity of Libyan territory and divide it into three states, whereby Tripoli and its province will form a small state and have international trusteeship over another state formed in Fezzan. Kamouka also believes that Paris wants to change the geographic map by creating a passage linking the Fezzan to the city of Sirte, on the Mediterranean coast, for a new state France wants to have under its influence to control the closest port to Europe.

“In addition to this French scheme,” Kamouka said, “Paris is trying to place the third region of our country, i.e., Cyrenaica, in the east, and its capital, Benghazi, under Egyptian trusteeship, as a third country, dominated by Cairo.” Kamouka noted that this area, adjacent to Egypt, is being subjected to Egyptian and Gulf intervention to arm Islamist groups.

Kamouka believes Cairo is trying to sustain instability in the security and political situations to allow it to achieve the alleged historical ambition of gaining control of and annexing part of eastern Libya. Meanwhile, according to Kamouka, some Gulf regimes are supporting radical Islamist forces there to fight the Muslim Brotherhood, which allied with other forces to form the Tripoli-based National Salvation Government.

These Gulf regimes consider the Muslim Brotherhood their enemy and therefore support other Islamist groups, such as the Salafists, to challenge the Brotherhood. Thus, the objectives of these regimes intersect with those of Egypt in the east of Libya. The Egyptian regime is also hostile toward the Brotherhood.

The Libyan official said that the current picture in Libya is bleak, but that his government is holding on to hope and maintaining an optimistic outlook. He invited Al-Monitor to visit Tripoli to see firsthand that a prosperous Libya is a project of the future and a necessity for Europe; otherwise, Kamouka said, waves of immigrants and terrorists from North Africa will continue reaching the shores of the continent to the north.