In distributing ministerial portfolios, Israeli Prime Minister Benjamin Netanyahu is employing his well-worn strategy of eliminating the possibility of any Likud member having a chance to increase their popularity. 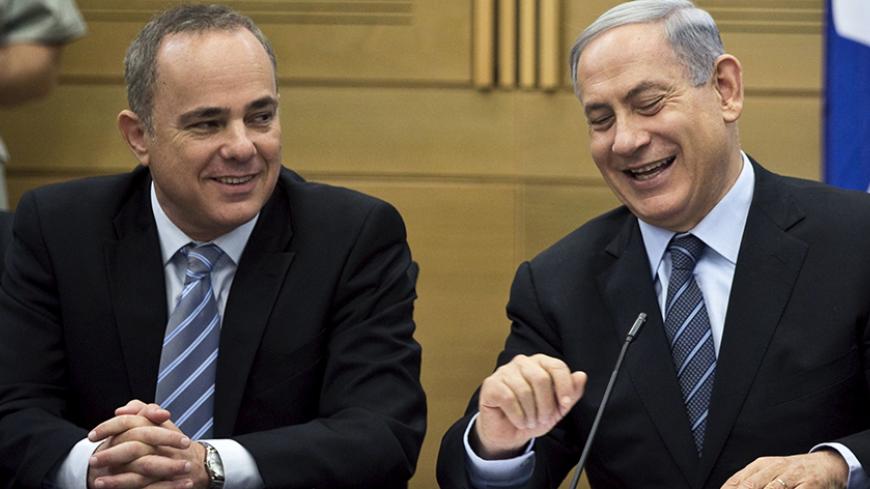 Senior Likud ministers Silvan Shalom, Gilad Erdan, Yuval Steinitz and Yisrael Katz heard various iterations of the following line in direct and indirect talks with Prime Minister Benjamin Netanyahu: “I’m keeping the Foreign Ministry for myself. I’ll be expanding the government very soon and will have to give it away at that time. There is no reason to put someone in the position for such a short period.”

Shalom, 57, had served previously as foreign minister. At 45, Erdan is the youngest member of the group. He is also the most popular and highly regarded Likud minister in the party and is regarded similarly among other parties as well. Even during the most difficult days of the last elections, he put everything on the line to defend the Netanyahu family in the media. Steinitz, 58, has become something of a joke on Israeli satirical TV shows because of his absolute loyalty to Netanyahu and Netanyahu's wife. Katz, who turns 60 this September, has been stuck in the Transportation Ministry for the past two terms. Each of these men thought that he was the ideal candidate for the position of foreign minister, but Netanyahu apparently never once considered giving that prestigious portfolio to any of them.

The prime minister could give the ministry to someone in trust, until he is actually required to hand it to some other party to expand his government, but he never actually pondered that option, nor were coalition considerations the sole reason that it never came up. As of May 14, Netanyahu prefers to keep the Foreign Ministry without a minister, even though the country faces a turbulent period diplomatically, with Israel’s foreign policy subjected to blow after blow on an almost daily basis. All that matters to Netanyahu is that no single individual from the Likud accumulates enough strength to pose a real threat to him by filling a position that could bolster that minister’s image as a leader or statesman.

When speaking to Netanyahu over the past few days, senior Likud members were overwhelmed by an intense sense of deja vu. As usual, he promised that things would work out, and they would be compensated in some way or another, but they knew that nothing good would come of the allocation of ministerial portfolios. This is the fourth time that the Likud chairman has insisted on turning the entire process into a grand parade of humiliating moments for the members of his party. As always, he left until the very last minute the tasking of assigning ministries to his own party, believing that his appointees would be less bitter and less prone to make threats the closer the disappointing news came to the new government’s swearing-in ceremony.

Even at age 67, after winning a stunning victory in the March 17 elections and just before forming his fourth government, Netanyahu is doing everything he can to make sure no one from the Likud overshadows him. It all involves his personal character and his management style toward anything that he conceives as a threat. As far as Netanyahu is concerned, his approach actually works. The fact is that there is now no one in the Likud who poses a threat to his position. The last person who even tried to challenge Netanyahu was former Interior Minister Gideon Saar, but he was subjected to such severe political abuse that he eventually broke down and resigned.

Netanyahu has made a conscious decision not to groom an heir. He doesn’t want to share the stage with another strong politician. The same is true of threats from people outside the Likud. After the 2013 elections, Yair Lapid, the popular chairman of Yesh Atid, was appointed finance minister even though he didn’t want the position and it didn’t suit him. Lapid wanted to be foreign minister, but Netanyahu sensed that this would pose a clear and immediate danger to his own popularity. He immediately envisioned Lapid visiting world capitals and building a reputation as a serious leader among the Israeli public. Conspiracy theories prevalent in the political system tell of how Netanyahu helped his former defense minister, Ehud Barak, publicly eliminate from the political arena his own rival, former Chief of Staff Gabi Ashkenazi. Over a period of a few years, Ashkenazi had become one of the most popular public figures in Israel and made no secret of his plans to enter politics and perhaps even run for the premiership.

The history of the Likud, both in the recent and distant past, is rife with stories of senior figures who left the party because Netanyahu refused to give them room to grow. Instead, he abused them politically from the moment they appeared to pose a threat to his own status. The equation is simple. The stronger you become in the Likud, the sooner you need to start counting down to the end of your career. The new finance minister, Moshe Kahlon, went through the same process as Saar, but in his case, he decided to translate his public popularity into an independent political force by launching his own party. Today, one of Kahlon’s greatest pleasures is watching his old colleagues in the Likud biting their fingernails to a pulp as they await Netanyahu’s decisions. Meanwhile, he has already taken the Finance Ministry and succeeded in making a series of other accomplishments in the coalition negotiations.

Netanyahu is constantly on the alert for political threats, potential putsches or the possibility of a coalition being formed to depose him. He is on the alert even now, when his leadership of the party is unchallenged. That is why, when dealing with the Likud leadership, he has always adopted a policy of divide and conquer. Some claim that he actually makes a point of stirring up rivalries within the party’s top leadership. The fact of the matter is that there are no camps within the Likud or any real opposition for that matter, just as it was under the leadership of Yitzhak Shamir. With every senior party member focused exclusively on his or her own interests, their bargaining power in negotiations with the party’s leader is significantly reduced.

Right before Netanyahu formed his first coalition, after his surprising victory over Shimon Peres in the 1996 elections, he did everything he could to diminish the strength of former Prime Minister Ariel Sharon, who did so much to help him get the ultra-Orthodox vote. Seeing Sharon as a serious political threat, Netanyahu only offered him the opportunity to return to the Housing Ministry. To Dan Meridor, considered a rising star in the party, he offered a series of minor portfolios, including the Tourism Ministry. In the end, however, Netanyahu succumbed to threats. David Levy, who was slated to be foreign minister, announced that he would stay out of the government unless an appropriate position was found for Sharon. In response, a new portfolio, national infrastructure, was created especially for Sharon, and Meridor became finance minister. Meridor later came under attack from Netanyahu and eventually resigned from his post. The same thing happened with Silvan Shalom in 2009. He threatened to stay out of the government if he wasn’t appointed foreign minister, but finally won a compensation package in the form of two portfolios.

In forming his fourth coalition, Netanyahu will reach the finish line after divvying up whatever ministries he has left after coalition negotiations. Once again, he will leave behind him weak, embittered and angry ministers from his own party. The question is which of them will dare to challenge Netanyahu’s leadership of the party. It seems unlikely any of them will. The way things look now, history will simply continue to repeat itself.