Netanyahu has self to blame for 'extortion' in Israeli politics

Having formed a coalition government with only one seat to spare, Israeli Prime Minister Benjamin Netanyahu will have to devote much of his time to keeping his government intact. 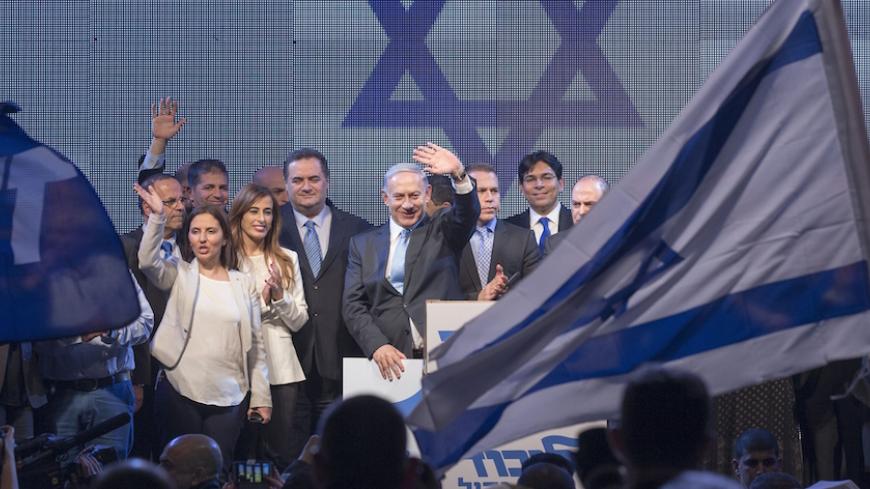 Israel's prime minister and leader of the ruling right-wing Likud Party, Benjamin Netanyahu (C), and party members gather on stage during a campaign meeting ahead of the early elections for the 20th Knesset, Tel Aviv, Jan. 5, 2014. - JACK GUEZ/AFP/Getty Images

While the chairman of HaBayit HaYehudi spent the weekend celebrating his victory in the last round of coalition negotiations, Prime Minister Benjamin Netanyahu complained privately about Israel’s electoral system. According to him, it encourages extortion.

Less than two months have passed since Netanyahu celebrated his remarkable success in the March 17 elections, in which his Likud Party won 30 Knesset seats. At the end of the process of piecing together a government, and with a government supported by only 61 members, the narrowest possible majority, Netanyahu, indeed, finds himself in a situation where he is prone to extortion and pressure. His fourth government, which will soon be sworn in, is narrower and more vulnerable than any he has ever led. It is now clear to everyone that Netanyahu will be forced to devote a good part of his time to keeping his coalition intact. In other words, he will have to make sure that each and every one of its members feels satisfied at all times.

The Likud faction held a meeting May 10, just before the Knesset voted to increase the number of Cabinet ministers beyond the maximum of 18 previously allowed by law. At that meeting, Netanyahu approached each Likud Knesset member to offer his personal congratulations. He shook hands, patted shoulders and spent more time than usual chatting with them. New Knesset members reported that he had asked about their parents and children and even took time to look at photos. Considering the balance of power in the Knesset — the coalition with 61 seats versus the opposition with 59 — unlike during his previous terms, the prime minister cannot afford to skip many votes, because every one could be important or decisive. This means that he will have to spend many long hours in the Knesset plenum, as will the finance and defense ministers.

Netanyahu also expressed his displeasure with Israel’s current electoral system in recent conversations with Likud Party members who met with him about the allocation of portfolios in the new government. He simply extended his arms, as if to say, “What else could I do?” when explaining why he gave the most senior portfolios to his coalition partners and why he kept the Foreign Ministry for himself rather than giving it to one of them. He hopes that when the time comes, he will be able to use the prestigious foreign minister portfolio to expand his coalition.

Netanyahu's people told anyone willing to listen that it was only at the very last minute that the prime minister actually prevented HaBayit HaYehudi Chair Naftali Bennett from getting the Defense Ministry. According to them, Bennett realized that his bargaining power had grown inordinately the moment former Foreign Minister Avigdor Liberman made his surprise announcement that he would not be entering the government, and as a result, demanded the most senior ministry of all for himself.

Netanyahu is right. The current governing system encourages extortion. He has been complaining about this issue for the past two decades and has made endless promises to institute change. In most cases, he only remembers the current system’s drawbacks around election time or, alternatively, when he finds himself in trouble and needs an excuse.

The Likud leader has a very long history of advocating the idea of changing Israel’s system of government, but for most of this time, it amounted to little more than talk, promises and point-specific statements at best. At worst, he actually opposed initiatives to institute significant changes to the system. In 2007, for example, when he led the opposition, he voted against a measure proposed by the Kadima Party to bolster governability, fearing that the law would keep Kadima in power for years to come.

Netanyahu made his biggest promise on the issue Jan. 5, when he kicked off the Likud’s election campaign under the slogan “Vote Likud to change the system.” The slogan filled an entire banner stretching across the stage during the ceremony. People with especially good memories will recall that the prime minister was actually recycling a slogan from the 2013 elections. The government formed in the wake of that event fell apart less than two years later, on Dec. 2, when Netanyahu fired Finance Minister Yair Lapid and Justice Minister Tzipi Livni. At the time, his excuse was that the problems of governability made it impossible for him to continue to lead the country.

Putting governability at the center of his campaign was intended to justify the dismantling of his previous government after it served less than half its term, but it was also used to distract the public from any real debate about the cost of living and the housing crisis, two issues considered to be weak spots for Netanyahu.

“Israeli politics is crumbling. We are breaking up into small and mid-sized parties, none of which can really rule,” Netanyahu said at the election event. “If change doesn’t happen, that will happen again in another two years. My goal is to fix this flaw in a fundamental way so that it lasts for the next 40 years. We are going to initiate a dramatic move that will change the face of the country. We will pass a law that will change the system of government in Israel.”

In background conversations, Netanyahu’s staff explained that during the new government’s first 100 days, new legislation will be passed that will include two major changes to the current system of government. The first is that the head of the largest party will be automatically tasked with forming a government, in the belief that this will encourage smaller parties to consolidate into larger blocs. The second proposed change is that a vote of no confidence to topple the government will require 70 Knesset members, as opposed to a bare majority. The underlying rationale is that this will, supposedly, increase the government’s chances of completing its four-year term.

Soon after the campaign's inauguration, however, Netanyahu shifted the focus to security. In the final hours of election day, he prodded Likud supporters to go to the polls by using racist scare tactics, claiming that Arab voters were headed to the polls in droves. Since his electoral victory, Netanyahu has steered clear of the problems of governability. His grand promise to change the system was absent from the coalition negotiations, and later, from the basic guidelines of his new government.

As far as his complaints about extortion are concerned, Netanyahu has mostly himself to blame. He could have advanced and even passed legislation to change the system during his two previous terms, and that would have made things easier for him now. Given the current circumstances, however, the next elections are also likely to be moved forward, and the system will remain the same.

According to Yohanan Plesner, president of the Israel Democracy Institute, there are two political scenarios that could result in changes to the prevailing system. The first is a national unity government of the Likud and Zionist Camp parties formed to enact such a change. The second scenario is if Netanyahu calls early elections because his coalition is unable to govern and tend to matters of state. Plesner said, “Should that happen, he can reach a series of understandings with the Zionist Camp and work with it to change the law before the next elections. In that case, he would head into the elections with a new governability law in place.”