Alongside a serious discourse in Israel on the Holocaust, there also exists a populist discourse that makes use of the Holocaust to the point of seeming contempt. 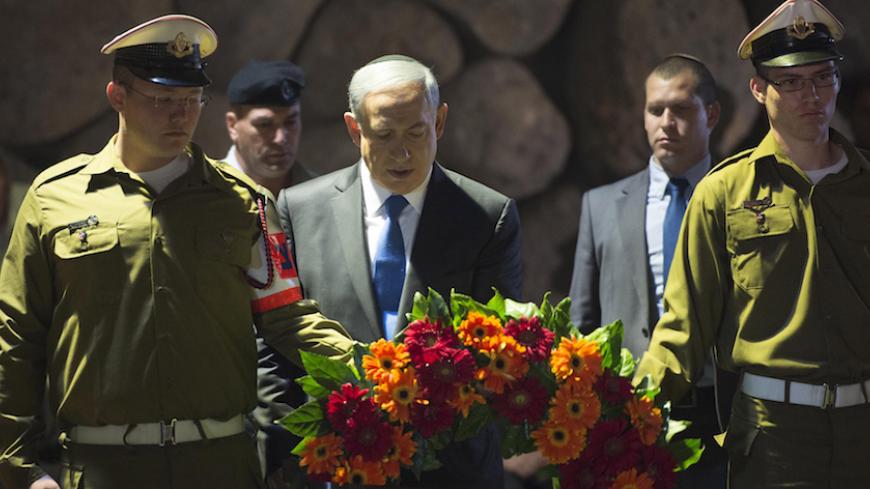 “Democratic governments made a critical mistake before World War II, and we are convinced … that they are making a grave mistake now too … Meanwhile, we will not flinch. We will continue to insist on the truth, and we will do everything we can to open the eyes that are shut.”

The above comments were made by Israeli Prime Minister Benjamin Netanyahu at the official ceremony marking Holocaust Remembrance Day on April 16. Even people unfamiliar with the jargon knew exactly what he meant.

Diligent web denizens distributed the full text on Facebook, with every reference to the Holocaust highlighted in red and every reference to Iran and other current, declared existential threats marked in yellow. Although the text in question was dedicated to Holocaust Remembrance Day, the picture that emerged was decidedly yellow.

The Israeli daily Haaretz rose to the challenge and similarly marked other Netanyahu’s speeches from 2013 to 2015. They found that with each year, the speech map has become increasingly yellow. In other words, less Holocaust and resurrection, more “the new Hitler.”

There is nothing new in the Holocaust being turned into political currency with which Israelis are inundated. On the one hand, there is a mature, serious and in-depth Holocaust discourse in Israel. On the other hand, there is a loud, populist and sensationalist discourse that has trivialized the event, making it mundane in a manner that many feel displays contempt. During the campaign leading up to the March 17 elections, the situation had devolved to the point that the executive board of Yad Vashem issued a statement asking “all political bodies to remove the Holocaust issue and its analogies from the political debate, and even more so from election propaganda.”

Political use of the Holocaust was not invented by Netanyahu and the right. It is a legacy of Mapai, a Labor Party predecessor. “[Prime Minister David] Ben-Gurion created an analogy between [Egyptian President Gamal Abdel] Nasser and Hitler, and in the 1950s the government funded films that depicted the Arabs as Nazis,” Liat Steir-Livny, a lecturer at the Sapir Academic College and thesis adviser at the Open University, told Al-Monitor. “Israel’s discourse about the boundaries of Auschwitz began with a remark by [Foreign Minister] Abba Eban, and [Prime Minister Menachem] Begin honed it and restored the Holocaust to the public discourse.”

Tom Segev, a historian, journalist and author of “The Seventh Million: The Israelis and the Holocaust,” argues that it is incorrect to view the manipulative use of the Holocaust solely as a right-wing tactic. He told Al-Monitor, “There’s not a single Arab leader since 1948 who has not been compared to Hitler, including [Jordanian] King Hussein and [Egyptian President Anwar] Sadat. Even the left always utilized the Holocaust for its needs. Several years ago [2004], it was revealed that Israeli soldiers forced a Palestinian to play the violin, a quintessential Holocaust image, and the left made use of it over and over.”

Steir-Livny believes that the perception of victimhood is an inherent component of Israeli identity. “We are imprinted with the Holocaust at an early age, with great force and intensity, and we view everything through those lenses — from Iran to the ‘Nazi’ lecturer who gave me a bad grade. That is our world of associations. We are a post-traumatic society unable to cut itself off from the past, living it in the present. Add to that the unstable security situation, and you get collective anxiety, which the agents of memory are careful to pound into us as though we were on the verge of a second Holocaust.”

According to Steir-Livny, this makes second- and third-generation Holocaust survivors distance themselves from the Holocaust as a historic event. “This is not disrespect or contempt for the Holocaust, but a way to slightly distance the horror,” she said. “The result is memory based on other spheres, such as humor, for example, or use of the Holocaust for political purposes, on the right and the left, or use of Holocaust jargon in ethnic clashes.”

To Steir-Livny's point, take for example, this past Holocaust Remembrance Day, during which Israelis of Mizrahi (Middle Eastern) origin posted expressions of “regret” that “Hitler had not finished the job,” having failed to annihilate all the Ashkenazi (European) Jews. There is also the repeated use of the Holocaust in vegan discourse thanks to the famous quote by Isaac Bashevis Singer: “For the animals, it is an eternal Treblinka.” Despite it all, Segev and Steir-Livni do not think the memory of the Holocaust has been totally eroded.

“In Israel it’s hard to differentiate between sincere Holocaust sentiment and manipulative Holocaust arguments,” Segev said. “It reflects a fundamental disagreement in Israeli society about the lessons of the Holocaust: Does the Holocaust impart a universal, humanistic lesson about the need to fight against racism and for human rights or is the lesson Jewish — ‘never again’ and ‘in every generation.’” The latter expression is in reference to the Passover saying, “In every generation they rise up against us to destroy us.”

Both Steir-Livny and Segev agree that the Holocaust also serves as an Israeli propaganda tool. “Israelis and Palestinians compete on the question of who is the true victim, because the victim is also the just,” Segev said. Steir-Livny noted, “The narrative created since 1948 includes several central ingredients, such as ‘never again.’ The lessons are purely Jewish and Zionist, and there are no others. Thus, the Holocaust is not a source of universal lessons about racism, hatred of others and the harnessing of society for that goal.”

In Steir-Livny's opinion, the Holocaust discourse should be moderated. “It’s unbearable that a child knows he is a victim even before he knows who he is. This is no way to forge a quasi-normal existence,” she said. “If we tone down the intensity [of the use of the Holocaust], we can create a new discourse for the fourth and fifth generations, focusing on the horrors and on the effect of the Holocaust and its lessons for the present.”

An attempt in this direction is made by Naomi Yoeli’s play “My Former Stepmother-in-Law,” which was performed this past Holocaust Day at Hatmuna in Tel Aviv. The play recounts the story of Agi Yoeli, a Holocaust survivor, without once mentioning the word “Holocaust.” The play is effective and moving (and also funny), despite that it openly refuses to discuss the true horrors because, according to the playwright, they are too immense to describe. The delicate and indirect reference is sufficient to generate genuine emotion in the audience.

Haaretz theater critic Michael Handelzalts wrote in a lengthy review that the play deals with the Holocaust “without entertaining illusions or nightmares about the future, and also without wallowing in the suffering of the past.” In another review, he summed it up in this way: “This is what a Central European doctor would have prescribed for a patient complaining of a grave case of ‘Holocaustitis.’”

Disclosure: The author is related to Naomi Yoeli.