It's best to leave the Holocaust out of politics. 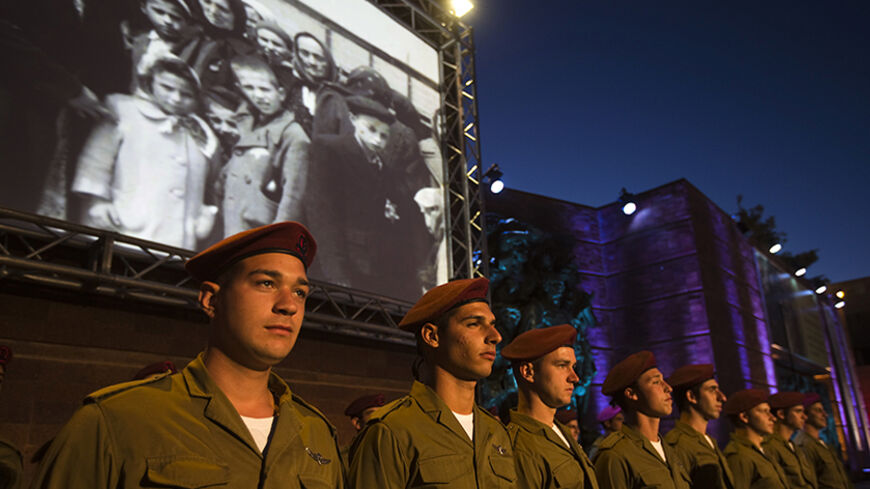 “The Holocaust was the most heinous crime to have occurred against humanity,” read the announcement disseminated by the office of Palestinian President Mahmoud Abbas April 27, the eve of Holocaust Remembrance Day. Abbas’ statement is surprising; not because of the timing — during a severe crisis with Israel — but because of the claims and speculation that he is a Holocaust denier himself.

The perception of Abbas as a denier of the Holocaust is common mainly among right-wing Israeli activists. It's based on excerpts from the doctoral thesis he wrote at a university in Moscow at the beginning of the 1980s. This work, titled, "The Connection between the Nazis and the Leaders of the Zionist Movement (1933-1945)," was the basis for the book he wrote and published in Jordan in 1984, titled, "The Other Side: the Secret Relationship Between Nazism and Zionism."

True, we cannot find the dissertation or the book today. But according to Abbas, the number of Jews murdered in the Holocaust was not 6 million, a number he claimed was an exaggeration. He also argued that the Zionist movement held a certain amount of responsibility for the destruction of the Jews by the Nazi regime. Nevertheless, he wrote in the book, “The debate over the number does not in any way detract from the heinousness of the crime committed on the Jewish nation. Killing a human being is a crime that the civilized world cannot accept and humanity cannot forgive.”

Later on, in a 2013 interview with Haaretz, Abbas expressed his unhappiness with being portrayed as a Holocaust denier, saying, “I wrote in detail about the Holocaust and said that I did not want to discuss numbers. I quoted an argument between historians in which various numbers of casualties were mentioned. … I have no desire to argue with figures. The Holocaust was a terrible, unforgivable crime against the Jewish nation, a crime against humanity that cannot be accepted by humankind. The Holocaust was a terrible thing and nobody can claim I denied it."

It's doubtful whether the great interest demonstrated by Abbas in the Holocaust, as expressed in the treatises he wrote in the 1980s, gave him the appropriate tools to understand the influence of the Holocaust on Israeli society, and especially on the way decisions in Israel are made regarding foreign and security affairs. The words "Holocaust," "Nazi" or "annihilation" arise repeatedly when important diplomatic decisions must be made or there is any kind of security threat to Israel.

Holocaust memories and symbols hover over the everyday Israeli existence. Every Israeli child learns about the Holocaust's horrors from a young age in school and is taught to remember them. Right-wing activists who oppose territorial compromises use the Holocaust to strengthen their claims. For example, settlers in the Gaza Strip settlement bloc Gush Katif wore orange armbands to protest the evacuation from their homes. Other settlers drew posters of late Prime Minister Yitzhak Rabin in an SS uniform after he signed the Oslo Accord. Finance Minister Yair Lapid and Economy Minister Naftali Bennett were also depicted as Nazis in a recent cartoon.

Prime Minister Benjamin Netanyahu himself makes excessive use of Holocaust imagery in the Iranian nuclear context. On April 27, he also used the Holocaust theme for the Israeli-Palestinian conflict. But when the Holocaust metaphor of an existential threat to Israel is inserted into negotiations with the Palestinians — regardless of Israel’s modern military might, compared to Jewish powerlessness during World War II — the odds of achieving compromises and a breakthrough in relations between the countries fall close to zero.

Netanyahu’s response to Abbas’ recognition of the Holocaust as the most heinous crime against humanity went like so: “Mr. Abbas can't have it both ways. He can't say the Holocaust was terrible but at the same time embrace those who deny the Holocaust and seek to perpetrate another destruction of the Jewish people. … Unless Hamas has changed its positions, unless Hamas says, 'I am willing to recognize Israel,' … I call President Abbas: Tear up your pact with Hamas, recognize a Jewish state, come back to a real peace process.” This reaction demonstrates, more than anything else, that no compromise is likely around the discussion table.

Instead of welcoming the recognition of the Holocaust by a person formerly viewed as a denier, Netanyahu deliberately misheard Abbas’ statement. Again, the prime minister invoked the Holocaust and Jewish annihilation to suggest that Abbas prefers those who desire Israel’s destruction over peace talks with it. In other words, according to Netanyahu, Abbas does not want peace and even aligns himself with those who want to destroy Israel.

Needless to say, the tremendous military power and operational abilities attributed to Hamas have no basis in reality. Though Hamas is a terrorist organization according to all international definitions, it is widely known that it has very limited power, certainly when compared to Israel's might. Hamas does not constitute an existential threat to Israel. In fact, it is Israel’s power as a sovereign state with substantial resources that led Hamas to choose reconciliation with Fatah and waive the hegemony it had created in the Gaza Strip. In addition, Abbas promised that the new national unity government to be established under him based on reconciliation with Hamas would recognize Israel.

Abbas’ statement should be viewed as Palestinian recognition of the Jewish Holocaust. He added, “The Palestinian people, who suffer from injustice, oppression and are denied freedom and peace, are the first to demand the lifting of the injustice and racism that befell other people subjected to such crimes,” In other words, Abbas also recruits the Holocaust for political and diplomatic needs.

One piece of advice to everyone: Leave the Holocaust alone. Concentrate on the Israeli-Palestinian conflict itself, from which we can also extract metaphors, comparisons and lessons to be learned. The exploitation of the Holocaust for diplomatic and political needs adversely hurts the memory of the victims.

Israel and its population, Jews and non-Jews, are not under threat of annihilation. And Palestinian suffering, as harsh as it may be, cannot be compared to the “most heinous crime to have occurred against humanity in the modern era,” in Abbas’ words.