Palestinian President Mahmoud Abbas is making efforts to denounce the Holocaust while Prime Minister Benjamin Netanyahu continues to tarnish Palestinians with falsehoods about the Palestinian leadership during WWII. 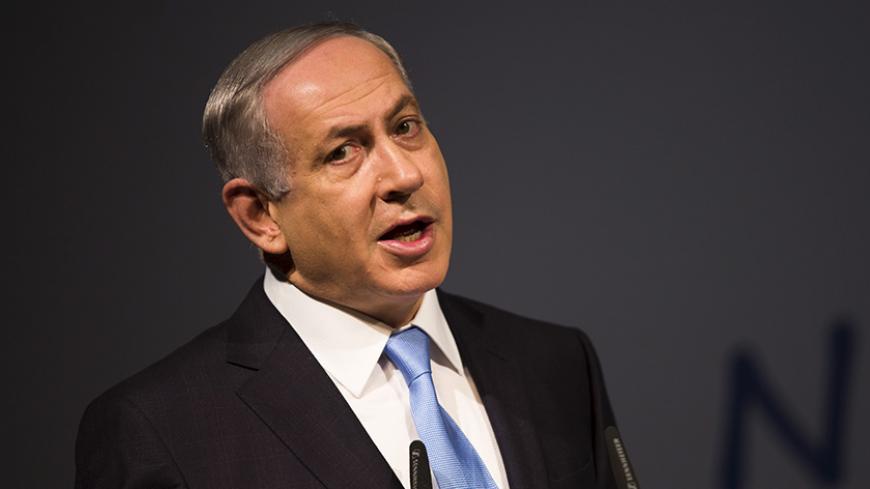 Prime Minister Benjamin Netanyahu is a right-wing extremist, a politician without vision, a hedonist and a prevaricator (it’s not nice to call a prime minister a liar), but he’s by no means dumb. It’s hard to believe that he didn't anticipate the political storm that ensued from his decision to deny Adolf Hitler credit for the annihilation of the Jews in a speech he gave at the World Zionist Congress in Jerusalem. We should assume that Netanyahu was not surprised at the harsh responses to his attribution of the initiative to kill the Jews to Haj Amin Al-Husseini, the mufti of Jerusalem. He was most likely aware of the fact that he’s rewriting the most terrible chapter in the history of the Jewish people. But Netanyahu isn’t interested in revising history, he’s too busy revising reality.

This was the case when Netanyahu declared on election day that "Arab voters are coming out in droves to the polls,” adding, “Left-wing organizations are busing them out.” While this was a racist lie, it certainly helped the prime minister win re-election. After this lie helped him stay at Balfour Street, Netanyahu invited a group of Arab sycophants and made them a weak apology.

As far as Netanyahu is concerned, the media can bark and howl about the disgusting lie regarding the Final Solution. What does it matter if Husseini suggested to Hitler to burn the Jews, or only to expel them? As always, the next day he’ll publicize a clarification, and his home paper, Israel Hayom, will make him into a victim of the left. The point is that in the process, newspapers will pull out of the archives the photo of a Palestinian leader sitting comfortably beside the hateful Nazi.

Netanyahu doesn’t even bother to hide that the mention of the mufti was meant to hammer another nail in the coffin of the two-state solution. At the foot of the stairs to the plane that would take him to Berlin Oct. 20, Netanyahu admitted that his statement was meant “to show that the forefathers of the Palestinian nation, without a country and without the so-called ‘occupation,’ without land and without settlements, even then aspired to systematic incitement to exterminate the Jews.” There’s no better proof, according to Netanyahu, that “the root of the problem” was and is still “inciting to murder Jews.” From 1941, seven years before the establishment of the Jewish state, Netanyahu skips light-footed to 2015, when the State of Israel has the most powerful military in the Middle East and hundreds of nuclear weapons, according to foreign sources. From the Nazi collaborator, it’s an easy leap to Palestinian President Mahmoud Abbas — the same Abbas who risked his life by signing the Oslo Accord. Furthermore, Netanyahu took advantage of the special Knesset plenary session in memory of late Prime Minister Yitzhak Rabin on Oct. 26 to tell a lie about Abbas, accusing him of ''refusing to give up the dream of returning to Haifa and Jaffa.''

To get the most out of the mufti story, Netanyahu determines that he “is still a revered figure in Palestinian society, he appears in textbooks and it is taught that he is one of the founding fathers of the nation.” This sentence is just as correct as the claim that the mufti sold the Final Solution to Hitler. The falsification of the reverence for the mufti is expressed in the autobiography of Abu Iyad, PLO leader Yasser Arafat’s deputy, who was the commander of “Black September.” It was Abu Iyad who articulated the principle of a Palestinian state within the 1967 borders and was killed for it by the terrorist Abu Nidal’s people. In his autobiography, which was dictated to Arik Rolo and published in 1978, Abu Iyad claims that in his friendship with Hitler’s Germany, Husseini made a mistake “that we censure unequivocally.” He says that when he last met Haj Amin in 1974, three months before the mufti's death, “I confronted him regarding his close ties with Germany.”

Even if Husseini was the father of the Final Solution, linking him to the Palestinian society of today is similar to equating Germany of the 21st century to the Germany of the Third Reich. Ronit Marzan, who researches the mufti in the Department of Middle East History at Haifa University, said in an interview with the Israeli website Walla that he is a person the Palestinians actually would like to forget. They see Husseini as a man who abandoned his people. According to her, he hasn’t been memorialized, but now, thanks to Netanyahu, every Palestinian child knows who the mufti of Jerusalem was. It’s worth noting that thousands of Palestinians answered the call of the opposition, which was connected with the Jordanians and King Abdullah, to enlist in the British army. About 400 of them were captured by the German army. The historian Mustafa Kabha noted in his book "The Palestinians: A People Scattered" that after World War II broke out, a group of second-tier Palestinian leaders met with British High Commissioner Harold MacMichael and expressed their support for Britain.

At the February 1942 meeting of the Enlistment Council, Moshe Sharett, then the head of the political department of the Jewish Agency, noted, “The enlistment of the Arabs is at a high point.” Also according to Sharett, at an enlistment gathering in Jericho, in the presence of the British Chief Secretary, Mayor John Macpherson said, “We must enlist in the British army in order to defend our homeland. … I call you to jihad, against Hitler, the oppressive aggressor.”

One of the main elements of the worldview of many Palestinian thinkers and politicians is their victimhood at the hands of the victims of the Holocaust. In April 2014, Abbas made an official statement in which he called the Holocaust “the most heinous crime to have occurred against humanity in the modern era.” In the same statement, publicized by all the Palestinian news agencies, the Palestinian leader emphasized, “The Palestinian people, who suffer from injustice, oppression and [are] denied freedom and peace, are the first to demand to lift the injustice and racism that befell other peoples subjected to such crimes.”

At the same time, Abbas called on the State of Israel to work for a just peace based on two states for two people. When the Palestinian leader talks of peace between two people based on the 1967 borders, there’s no reason to suspect him of lying. He has never veered from the path of Oslo. When Netanyahu says he’s for peace between the two peoples, we have to check carefully what he means. Is he referring to the Bar-Ilan speech of six years ago, when he promised a Palestinian state, or the interview of six months ago, when he said he wouldn’t abet the creation of a Palestinian state? Perhaps, as we have already seen, Netanyahu’s words were not meant to withstand the test of reality, but only the test of survivability.