Israel's Joint List will convene this week to decide whether to lodge a police complaint against Defense Minister Avigdor Liberman for comparing Arab lawmakers to Nazis. 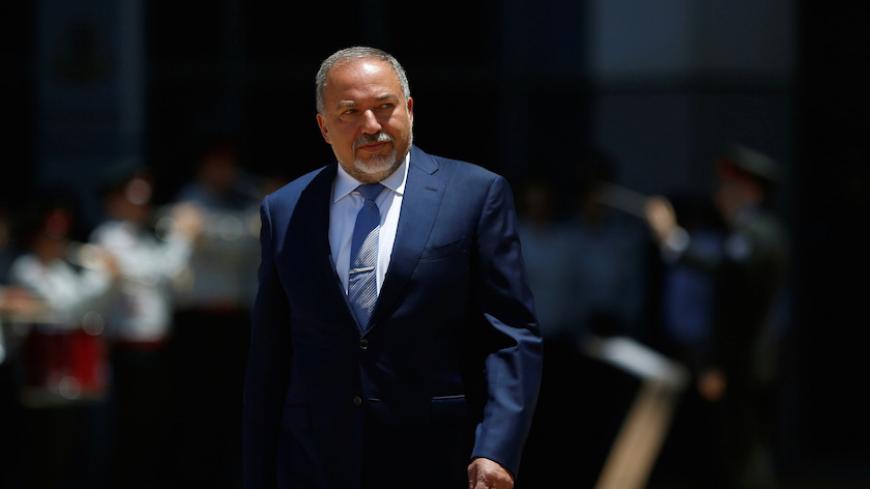 Israelis are well aware of Defense Minister Avigdor Liberman's view of the country’s Arab citizens, particularly their elected Knesset representatives. Prior to the 2015 elections, Liberman, chairman of Yisrael Beitenu, pushed through a bill raising the electoral threshold in an effort to keep the Arab parties out of the Knesset. In doing so, he prompted the small Arab parties to unite in order to avoid exclusion. As a result, the Joint List was able to win 13 Knesset seats in the 2015 elections, becoming the third largest faction in the 120-seat legislature.

In recent years, Liberman has consistently called for the transfer of Israel’s Arab citizens, who make up 20% of the population, to a future Palestinian state to be established by an agreement between the sides. This population swap idea even became his party’s slogan in the last election campaign: “Ariel for Israel, Umm al-Fahm for Palestine,” a reference to the Israeli West Bank settlement town of Ariel and the Israeli Arab town of Umm al-Fahm.

Liberman makes no bones about his hostility toward the Arab Knesset members. On April 18, for example, a day after Palestinian prisoners in Israeli jails went on a hunger strike, the defense minister couldn’t resist saying he hoped that Arab Knesset members and Sheikh Raed Salah (leader of the northern branch of the Islamic Movement) join the hunger strike “without breaking down and eating chicken at night.”

When he served as minister of transportation under Prime Minister Ariel Sharon in 2004, after the Arab town of Sakhnin's football club won the national cup, Liberman claimed there was no place for an Arab group in the Israeli premiere league. Sharon was quick to rebuke him, saying, “We view the Arabs of Israel as part of the State of Israel. That is the position of the Israeli government.” Then-Justice Minister Yosef Lapid (father of Yesh Atid leader Yair Lapid) also rejected Liberman’s comments in disgust, calling the Soviet-born politician an “anti-Communist who espouses Stalin’s methods.”

But his latest pronouncement on May 8 is by far the most extreme and abusive Liberman has made publicly in his political career. At a meeting of his party’s Knesset members marking the 72nd anniversary of the victory over Nazi Germany, Liberman said, “I only regret that even today there are those who continue in the Nazis’ path and are trying to destroy the State of Israel and harm the Jewish people. Just as Germany had allies in the Middle East — I’m referring to the Mufti Amin al-Husseini — today I see people continuing his path.” Liberman went on to leave no doubt as to the identity of the people he was accusing of betrayal. Referring to the indictment of Joint List member Bassel Ghattas over smuggling phones to Palestinian security prisoners, he said, “MKs who tried to smuggle a cellphone to a murderer in an Israeli prison, or those who went to identify with the families of the ‘martyrs.’ … I hope that just as we knew how to defeat the Nazis, we will defeat the forces that act against us, from within and without.”

The Arab legislators claim Liberman crossed a red line, and that his comments constitute incitement to murder. “We have heard many pronouncements by Liberman over the years,” Knesset member Aida Touma-Sliman told Al-Monitor. But the comparison Liberman drew between Arab Knesset members and the Nazis — the most despicable, murderous and inhuman regime the modern world has known — is a dangerous escalation, she said.

Her fellow legislator Ahmed Tibi told Al-Monitor, “I’m not surprised by Liberman’s ignorance about the history of the Jews in Nazi Germany.” Tibi added that the chairman of Yisrael Beitenu, just like extreme-right French leader Marine Le Pen, promotes politics of hatred and lacks a basic understanding of democratic values. Sliman recounted that many Knesset members came to her and to other Arab lawmakers and apologized for the comments by the defense minister. “Yael German [Yesh Atid] came up to me, Ksenia Svetlova [Zionist Camp], Mickey Levi [Yesh Atid] and others and they said they were ashamed. But while these members were expressing disgust and shock, Knesset member Oded Forer from Liberman’s party started screaming at us that we’re terrorists, that we place flowers on the graves of terrorists, we’re supporters of Hezbollah and that we should be expelled from the Knesset. He kept shouting in my ear, in a frenzy, until I couldn’t even hear what the Knesset speaker was saying in rejecting Liberman’s comments. I couldn’t hear. They’ve gone completely mad.”

Sliman and other Joint List Knesset members expressed satisfaction that many legislators were shocked by Liberman’s remarks. But, she added, Jewish lawmakers feel the need to cast off such comparisons also because they belittle the horrors of the Holocaust. “Using us to draw a comparison with the Nazi dictator is both vile and over the top, but it also appears to make light of what happened to the Jews,” she told Al-Monitor.

The parties that make up the Joint List are expected to decide this week whether to lodge a complaint with the police or ask the attorney general to investigate Liberman for incitement to murder. “The time has come to stop allowing such things to go unanswered,” said Sliman. “That goes for things that are less insane, too. It’s time to move to a new phase and do something against people who express themselves this way.” When asked whether she expected Prime Minister Benjamin Netanyahu to condemn Liberman’s comments, she answered, “The person orchestrating this chorus of incitement is Netanyahu himself. We don’t expect Netanyahu to come to our defense. Absolutely not. I would have been surprised if he’s said anything against his defense minister, who makes Israel’s Arab citizens and their Knesset members fair game for killers.”