As Israel marks Holocaust Remembrance Day April 12, Prime Minister Benjamin Netanyahu is shamelessly exploiting the tragedy against whomever objects to his policies. 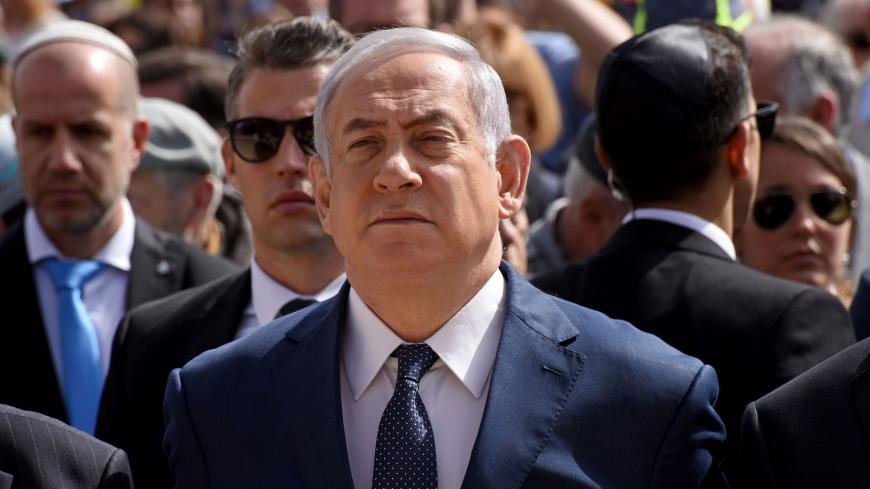 “The only thing we have to fear is fear itself — nameless, unreasoning, unjustified terror which paralyzes needed efforts to convert retreat into advance,” former US President Franklin Delano Roosevelt once said.

As Israel was preparing to mark its annual Holocaust Remembrance Day on April 12, the killer from Damascus presented his Jewish neighbors with horrifying scenes, massacres of children and women. Syrian President Bashar al-Assad made it clear to survivors of the Holocaust and members of the second and third generations that genocide is still possible, here and now. The gut-wrenching photos from Douma must have failed to move Russian President Vladimir Putin, sponsor of the crimes against humanity that have claimed an estimated half a million lives over the past seven years. Moscow dismisses the evidence of a nerve gas attack on the Syrian town and at the same time castigates Israel, which is trying to distance the Iranian army from its border.

On Jan. 27, Putin stood at the side of Prime Minister Benjamin Netanyahu to mark International Holocaust Remembrance Day at an event in the Jewish Museum and Tolerance Center in Moscow. Netanyahu took the opportunity to announce, “Seventy-five years after this hell, we are still determined to avert any attempts by such groups and ideologies, primarily Iran, which openly states that it wants to destroy us.” Netanyahu went on, “Our unwavering readiness to fight for ourselves and protect ourselves is an iron wall, a wall of steel that cannot be broken, and it will continue to protect us.” Turning to Putin, he added, “Mr. President, I am willing to testify that among the world leaders there are few who understand it as well as you do.”

Putin must also have been unimpressed by this attempt to link the conflict with Iran and the Holocaust. On April 11, he protested Israel’s efforts to block Iranian entrenchment on its Syrian border, warning Netanyahu against “destabilizing Syria.” On the same day, Netanyahu once again invoked the Holocaust in his campaign against Iran. Speaking at the opening ceremony for Holocaust Memorial Day at Jerusalem’s Yad Vashem Memorial, Netanyahu once again compared the 2015 agreement between world powers on curbing Iran’s nuclear weapons program to the 1938 Munich Agreement between Adolf Hitler and European powers allowing Germany to annex parts of Czechoslovakia. Netanyahu once more preached against indifference in the face of this renewed threat to Jews, pledging that an independent State of Israel will know how to protect them against their bitter Iranian foe.

This recurring theme in Netanyahu’s speeches at Holocaust commemoration events signals a personal commitment that “never again” will there be another Holocaust. At last year’s Holocaust Remembrance Day, Netanyahu suggested that the tragic reality of the Holocaust was “that the strong survive, the weak are obliterated.” The lesson? That “we must be able to defend ourselves by ourselves against all threats and any enemy guides me day-in, day-out, every morning and every evening.”

Netanyahu is not alone. Sara Netanyahu, his loyal wife, helps him nurture fear of another Holocaust perpetually lurking in the shadows. At an event marking International Holocaust Day held in the northern city of Haifa on Jan. 27, she said, “Our first obligation is to ensure that such a terrible tragedy never recurs. … Our nation will not go back to being weak and defenseless, a leaf borne by the wind.” After “Thank God we have a strong state, a strong and advanced army and superb security forces,” she was sure to add, “We also have a leadership, of course, that treats every threat seriously and protects us.”

Fear of a “second Holocaust” is fertile ground for the cultivation of mistrust and hatred of the other, whether that other be Arabs, African asylum-seekers, leftist liberals, judges, human rights activists or journalists. Even Israel’s president, who espouses the ideology of a greater Israel but refuses to toe the nationalist line, is ostracized. Fear is a surefire recipe for the repression of hope, change and tolerance. And fear of losing a great leader, Israel’s one and only defender against annihilation, can defeat the rule of law and bring down the pillars of democracy.

“Sometimes, I sense too much fear around me,” said President Reuven Rivlin in a speech last month at a conference called “70 years of Democracy in Motion.” “Too many people fear disagreement and criticism,” he warned. In a thinly veiled reference to Netanyahu and his colleagues in the Likud leadership, Rivlin added, “We are strong enough to build strong institutions for our democracy, institutions such as civil rights, the courts, the police and a state army. … We are strong enough to criticize our leadership — provided it does not turn into incitement and delegitimization — without worrying that through this criticism we are also harming the strength of the State of Israel.”

Israeli law calls for a five-year prison sentence for denying the acts perpetrated by the Nazi regime that constitute crimes against the Jewish people or against humanity, or for minimizing their extent with the goal of defending the perpetrators or expressing admiration for or identification with them. Israel rightly condemns Holocaust deniers in every corner of the globe and demands they be punished. While comparing the Iranian threat against the powerful State of Israel to the Nazi Holocaust perpetrated against powerless, stateless Jews cannot be considered denial of the Holocaust, this comparison does, nevertheless, belittle its uniqueness. As Israel marks 70 years of independence, it is time to stop cheapening and disparaging the Holocaust and to denounce politicians who use it to generate fear as an alternative to courageous policies.