Is Iran really to blame for Yemen conflict?

Yemen's conflict is homegrown and the only way to stabilize the country's descent into civil war is through a political deal. 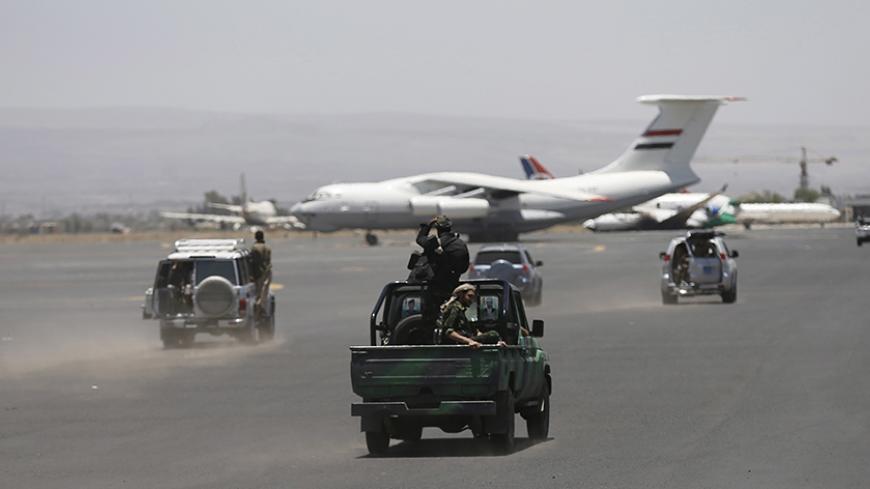 Houthi militants ride on a patrol truck at the international airport of Yemen's capital, Sanaa, April 29, 2015.

The deaths of at least 1,000 Yemenis, including 115 children, and over 3,500 injuries has seemingly been the main result of the Saudi-led military strikes against the country. The conventional wisdom of these attacks on Yemen has been that it is the latest battlefield in a proxy war between Iran and Saudi Arabia. Such portrayals of the conflict often frame Iran as the aggressor, parroting claims that Saudi Arabia’s intervention in Yemen was somehow forced due to Iranian meddling in its backyard. However, such assertions ignore not just the realities of Yemen’s internal politics, but also more than a little bit of history.

To gain a better understanding of the recent actions of the Houthi forces, it is vital to understand the broader historical context of their origins. The Houthis, who call themselves Ansar Allah, are members of the Zaydi sect of Islam. The adherents of Zaydi Islam, an offshoot of Shiite Islam, comprise upward of 40% of Yemen's population.

Yemen was effectively ruled by Zaydi "Imams" for over 1,000 years up until 1962, when military officers led a coup that overthrew the Zaydi-led state and attempted to establish a republican system. The ensuing civil war saw the heavy involvement of outside powers, in particular Egypt, under the presidency of Gamal Abdel Nasser. At its peak, the conflict saw the deployment of 70,000 Egyptian troops to Yemen and ultimately cost the lives of over 10,000 of them. Ironically, given the current events, Saudi Arabia supported the return to power of the Zaydi imams.

At its conclusion, the conflict left Yemen fractured. The republicans prevailed in the northern part of the country while the southern part of the country became a separate communist state. Despite the triumph of the republican officers supported by Egypt, Saudi Arabia still managed to co-opt the new North Yemen government and bring it firmly into its sphere of influence.

For the past several decades, Saudi-backed strongmen such as Ali Abdullah Saleh ruled over North Yemen and, later, unified Yemen. Saleh’s tenure was marked by the persecution of the country’s Zaydi minority, even as Saleh himself was nominally Zaydi. Saleh was also a strong supporter of Saddam Hussein during the Iran-Iraq War. After the 2003 US-led invasion of Iraq, Yemen became a refuge for Baathists, garnering Saleh the nickname “Saddam Saghir” (Little Saddam). After 34 years, Saleh's fall from power came in 2012, when he signed onto an agreement brokered by the Gulf Cooperation Council (GCC) to transfer power to his vice president, Abed Rabbo Mansour Hadi, in the midst of Arab Spring-inspired protests.

The Houthis have long described their grievances as derived from the socio-economic and political oppression faced by many Yemenis at the hands of their government, as well as the influx of divisive Saudi-sponsored Salafist propaganda in the country. They have also opposed US intervention in their country, making it a key part of their platform. The Houthis' armed insurgency against the Saleh government began in 2004, with six wars being fought between the two sides until Saleh’s 2012 ouster.

The Houthis also played an integral role in the protests that led to the removal of Saleh from power, and by all accounts were a significant power in the country when Hadi was sworn in as president. However, they were sidelined from the GCC-led political process that brought Hadi to power. Their continued marginalization from the transitional government and its seeming refusal to recognize the Houthi movement as a legitimate player soon led to protests, which eventually morphed into renewed military conflict.

The Houthis have been able to make impressive advances because they reflect in large part the genuine grievances of many Yemenis, regardless of sect. They have also proven themselves to be shrewd pragmatists and have made the most out of an alliance of convenience with former President Saleh. Hence, it is not only an exaggeration to attribute Houthi gains to supposed Iranian support, but it would also be disingenuous given the reality of the conflict inside Yemen.

This is first and foremost a Yemeni civil war, in which Saudi Arabia and other states have unwisely chosen to dramatically intervene. Furthermore, alleged direct Iranian intervention in Yemen not only contradicts Iran’s intrinsically defensive posture in the region — which many US policymakers and institutions have acknowledged — but also greatly overstates Iran's capability to influence events in Yemen in such a decisive way.

By attacking the Houthis, Saudi Arabia is further contributing to the destabilization of its southern neighbor and border, and weakening one of the only groups in Yemen that has successfully been fighting al-Qaeda in the Arabian Peninsula. As numerous similar foreign interventions in Middle Eastern civil wars have demonstrated over the years, Saudi Arabia has little chance in achieving a positive outcome in Yemen. In all likelihood, Saudi Arabia will only succeed in exacerbating the situation. It is easy to envision a scenario where al-Qaeda fills the power vacuum in Yemen and the Islamic State even potentially establishes a presence in the country.

To end hostilities and stabilize Yemen, the six world powers, Iran and Saudi Arabia should have an immediate meeting to discuss an inclusive plan aimed at reaching an immediate and complete cease-fire; ending all foreign military incursions; providing widespread humanitarian assistance; resuming broad national dialogue; addressing the concerns of the various factions and stakeholders inside the country in a non-zero-sum manner; agreeing on a power-sharing system; and establishing a national unity government. This needs to be done with a keen understanding of the root issues and concerns that have led to the present situation in the country and the Houthis taking the actions that they have, not through a reckless belief in self-deluding and simplistic narratives that blame everything on Iran.

Iran has, in fact, already made strides in this direction, with Iranian Foreign Minister Mohammad Javad Zarif sending a letter to UN Secretary-General Ban Ki-moon outlining a four-point peace plan for Yemen. Zarif emphasized the need for an inclusive dialogue between all respective parties and the “establishment of an inclusive national unity government.”

As the Yemen attack shows, Saudi Arabia’s regional strategy is bent on using Iran as a scapegoat to justify its own aggressive policies. These policies appear geared at maintaining and expanding uncompromising Saudi hegemony across the Arabian Peninsula and the Middle East. However, by aiming to preserve authoritarian governance in Yemen and further marginalizing vast segments of Yemeni society, Saudi Arabia is only damaging its own interests and opening the door for violence to spill over into its own territory. The Saudis should be cognizant that, just as it is with other crises in the Middle East, the only solution to the Yemeni conflict is a political solution based on addressing the concerns of all parties involved.