Throughout his political career, Israeli Prime Minister Benjamin Netanyahu has battled the 1993 Oslo Accord, backed it, objected to the two-state solution and then supported it again. 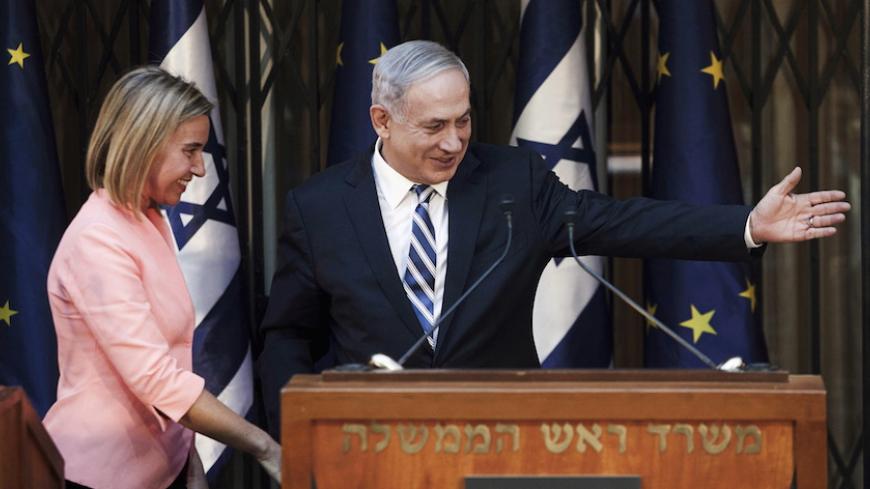 Israeli Prime Minister Benjamin Netanyahu (R) shows the way to European Union High Representative of the Union for Foreign Affairs and Security Policy Federica Mogherini during their meeting in Jerusalem, May 20, 2015. - REUTERS/Dan Balilty

On May 20, a surprise awaited Europe's foreign policy chief, Federica Mogherini. Israeli Prime Minister Benjamin Netanyahu invited her to his residence for an intimate meeting with only a handful of participants. Before going into the meeting, Netanyahu gave a statement for the cameras: His commitment to a two-state solution was alive and well. He supports the establishment of a demilitarized Palestinian state. The leaks from the meeting itself indicate that behind closed doors, the prime minister went even further, saying he wished to conduct a territorial discussion with Palestinian authorities, even hinting at his willingness to freeze construction in areas outside of the settlement blocs. Israeli media outlets reported that Netanyahu seems to have said in the meeting that he is interested in renewing negotiations to reach understandings on the limits of the settlement blocs that would be annexed to Israel in the framework of a future agreement.

We have heard many a statement from Netanyahu in favor of establishing a Palestinian state. We have also heard statements to the contrary. To refresh readers’ memory, here is a short compilation reflecting Netanyahu’s twists and turns regarding the two-state solution. In 1994, during the stormy opposition to the Rabin government and the Oslo Accord, which he has championed, Netanyahu claimed that the agreement presages a disaster for the Jewish people. In 1996, during the campaign that culminated in his election, candidate Netanyahu vowed that if elected, he would honor that very agreement.

In 2002, the once and future prime minister admitted that he had done all in his power to undermine the agreement. In 2009, he reiterated his rhetorical commitment to the two-state solution in his Bar-Ilan speech. And now, this year supplies an even sharper and faster flip-flop: In mid-March, on the last leg of his election campaign, the prime minister declared that if elected, a Palestinian state would not be established. Two months on, he makes it clear to the European representative that her vision is his too. No wonder that along with the satisfaction she expressed about the “successful” meeting, as she put it, Mogherini also asked Netanyahu for “steps on the ground that will back up your declarations and show commitment to a solution of two states for two peoples.”

To assess the likelihood of such practical steps, Al-Monitor spoke this week with three senior advisers on diplomacy and defense, on condition of anonymity. At the time, each had spent lengthy periods at negotiating tables and whispered in the ears of the Israelis who conducted the negotiations. Here is the thrust of their analyses.

A retired senior foreign policy official said, “At first glance, the good news coming out of the meeting awakens dormant hopes. Netanyahu does, indeed, read correctly the prevailing European sentiment, but his concern about it being translated into action is exaggerated. He is more convinced than the Europeans about their ability to bring down his government with punitive sanctions. Their ability to reach a sufficiently effective consensus is actually doubtful, given that a German or Czech leader [two countries known for their support of Israel] could get up at any moment and veto their proposals.

"In my view, it will take Netanyahu several weeks to understand that nothing of any substance will happen before September. Then, perhaps, two parallel processes will come together — the readiness of the international community and the right moment, in Netanyahu’s view. Namely, emulating late Prime Minister Yitzhak Shamir at the 1991 Madrid Conference [going there drudgingly] and late Prime Minister Ariel Sharon on the eve of the 2005 Gaza disengagement [when Sharon ‘sacrificed’ Gaza to forestall US attempts to make him negotiate over the future of Jerusalem and the West Bank]. Netanyahu, like them, will try to do as little as possible to get everyone off his back and enable [Zionist Camp leader Isaac] Herzog to justify joining the government, and at the same time not to enable any progress toward a Palestinian state, heaven forbid. From Washington too, I hear that if he comes up with something halfway normal, something that only hints at future prospects, [US President Barack] Obama will jump all over it with alacrity.”

A top defense adviser also regards Netanyahu’s latest pronouncement as part of the prime minister’s efforts to ward off external pressures. Netanyahu is “wiggling like an eel,” he said. “He may gain some time, and the two remaining years of Obama’s term will pass; the Islamic State will draw all the attention, and after that — God is great. Netanyahu assumes the Palestinians will, of course, refuse to start negotiations at the borders of the settlements instead of starting them at the borders of the Palestinian state. In addition, it is clear that for him, Jerusalem is not considered a settlement. Thus, if the Palestinians agree, they would be giving up their claim to Jerusalem. More than indicating his willingness to make concessions, his words illustrate the extent of the pressure he feels. Netanyahu’s remarks express a lack of logic, not to mention a strange position that pretends to be original. He assumes that everyone is gullible and can be fooled all the time.” Nonetheless, the senior adviser suggested that Netanyahu’s declarations should not be dismissed out of hand. He proposed, instead, to take Netanyahu at his word and start overall discussions from that point.

The third official has firsthand experience of Netanyahu’s flip-flops. In fact, he admitted today that in the past he himself believed that the prime minister was willing to advance toward an agreement, and only understood after the fact that he had been misled. That is perhaps why his assessment was the shortest but sharpest: “Oh really,” he said. “We have had enough of Netanyahu’s procrastination tricks. Suckers, as we all know, are born every minute, and now it is Federica Mogherini’s turn. If Netanyahu is serious, let him present the Israeli public with his map — even just the map that will serve as his opening gambit ahead of negotiations with the Palestinians. Let us see how his coalition survives on the day after.”

Indeed, one of the prime minister’s senior coalition partners, Agriculture Minister Uri Ariel, rushed to post his acerbic reaction to Netanyahu’s words on his Facebook page: “This morning we read that the prime minister is proposing to launch negotiations over the borders of the settlement blocs. If there is any truth to the report, it is a dangerous and precedent-setting proposal, which clearly contradicts the first section of the government’s basic policy guidelines: ‘The Jewish people have an inalienable right to a sovereign state in the Land of Israel, its national and historic homeland.’ I expect all elements of the coalition, and the prime minister first and foremost, to adhere to the guidelines.”

It is not nice to throw cold water over the enthusiasm of the European foreign policy chief. But as long as this is the makeup of the government, that these are its policy guidelines and this is the extent of the trust one has in the words of the man at its helm, then it is best to regard Ariel’s reaction as a credible reflection of Israel’s position. This stand prefers “disengaging” from the Oslo Accord and construction of the settlement enterprise. And as long as this is the government’s direction, Europe will only continue to provide hot air for the conflict. Once it was EU High Commissioner Javier Solana, after him Lady Catherine Ashton and now Mogherini.