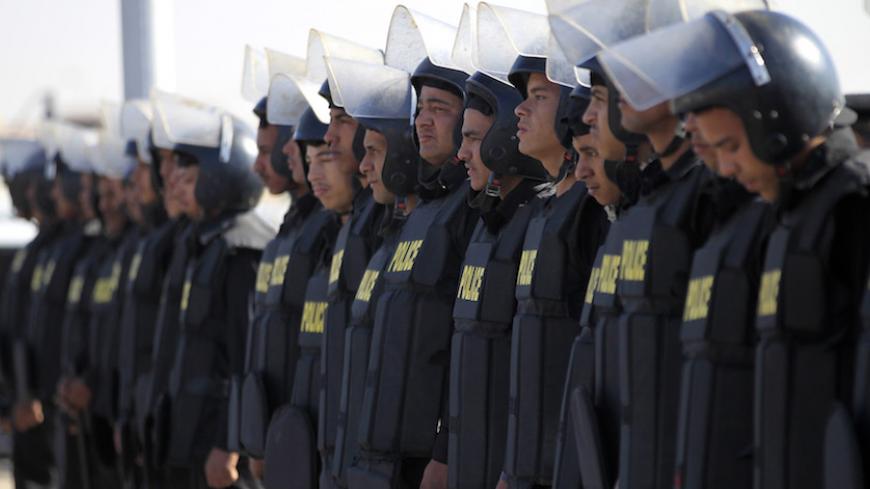 Police and security forces stand guard outside a police academy where the trial of former Egyptian President Hosni Mubarak is held on the outskirts of Cairo November 29, 2014. - REUTERS/Mohamed Abd El Ghany

CAIRO, Egypt — Remarks by former Justice Minister Mahfouz Saber that the son of a rubbish collector should not be appointed to the judiciary — delivered a few hours before Saber’s resignation — outraged Egyptians and highlighted the problem of social mobility, or lack thereof.

When asked during a television interview whether the son of a garbage collector might be appointed to the judiciary, Saber said, “The son of a rubbish collector will not become a judge, because he is not brought up in the right environment for this profession. Even if he becomes a judge, he will come across many problems and will [end up] quitting.” Saber also said, “The rubbish collector must have done a great job raising his son and helping him obtain a degree, but there are other jobs that suit him.” Saber stepped down May 10 following the public uproar triggered by his comments.

Egyptians' outrage brought to mind the troubling case of Abdul Hamid Sheta, who committed suicide in July 2003, at the age of 25, after being rejected for a job. Sheta had applied to be a commercial attaché, and although he had scored higher than 42 others on the diplomatic corps entrance exam, he was rejected because he came from a poor peasant family. According to the Foreign Ministry, ​Sheta was “socially unsuitable.” Some interpreted Sheta’s decision to jump off Cairo's Qasr al-Nil bridge as a show of strength and determination and rejection of injustice and discrimination against the poor.

In June 2014, 138 law school graduates from the class of 201 conveyed their distress to Egyptian President Abdel Fattah al-Sisi after they failed to get jobs in the parliament, although they had passed all their tests and had gone through the full round of interviews. It seems that Sheta’s message has not changed anything in terms of favoritism in public sector hiring.

Saber’s resignation will also not help a rubbish collector’s son or that of any other working-class person given the requirement of having to have a certain social standing to obtain certain jobs. Social status has always been a criterion for getting a job in the Egyptian judiciary, diplomatic corps, and police. Saber confirmed this following his resignation when he said, “This is how the situation is, and I’m convinced of it.”

Hafez Abu Seada, secretary-general of the National Council for Human Rights (NCHR), told Al-Monitor that even if Saber’s resignation does not change the status quo or guarantee equal employment opportunities in the judiciary or diplomatic corps, it has at least shed light on the discrimination in employment practices.

Abu Seada said that the NCHR has prepared a draft law forbidding all forms of discrimination, including in employment, in line with Article 53 of the 2014 Constitution, which reads, “Discrimination and incitement to hate are crimes punishable by law.” The proposed law would give every citizen subjected to discrimination the right to file a lawsuit.

Said Abu Seada, “The law includes criminal penalties. It gives back the right to be appointed through the administrative judiciary and includes the establishment of a commission on protection against favoritism.” The draft law will be taken up by the next parliament for consideration. Abu Seada thinks the incident involving Saber might encourage the president to act if the parliament fails to deal with the issue.

Maj. Gen. Maher Hafez, former chairman of the Supreme Council for Police Forces, told Al-Monitor that in his old sector “the focus is on the ‘social suitability’ of the applicants for police academies, as well as their families, [which are investigated] down to the fourth generation.” He said, “The issue has nothing to do with poverty or wealth, but rather with the milieu within which the applicants were raised, given that it is [an official] job that has to do with the community’s peace and security.”

Hafez also defended the former justice minister, stating, “Saber, in his statements regarding the social unsuitability of the rubbish collector’s son for judicial positions, did not mean to offend people of low social status, but rather to object to the assumption that the environment in which one is brought up does not necessarily reflect on character and personality."

Mona Omar, a former assistant foreign minister for African affairs, was also once a member of the committee tasked with administering Foreign Ministry entrance exams. On the apparent social status requirements for a career in the diplomatic service, she told Al-Monitor, “Honestly, the issue is very thorny. The interview is very important for the applicant’s admission, and it is based on a subjective opinion and personal assessment.”

Omar also said, “I am convinced that every person, as long as he has met the requirements for the job, has the right to be employed regardless of who his father or mother is.” She continued, “Based on how things were done, though, social status was often an obstacle when selecting applicants.”

Omar cited examples of how social status might affect applicants' presentation — including the way they speak and their ability to communicate — which the committee considers very important, knowing that people holding official positions are representatives of their country. According to Omar, some applicants are rejected for the way they dress for their interview, based on whether it is considered appropriate for a diplomatic job. For a job in the judiciary, she said, the issue is the fear that appointing a poor person might lead to bribery, given that people of disadvantaged backgrounds are assumed to have more of a need for money.

Omar explained that the committee handling Foreign Ministry entrance exams is required to consider social status in its assessments. There are some cases, however, where status is of no benefit even though an applicant comes from a prominent family. Omar said, “The most prominent example is my son. He is from an old diplomatic family, and he twice failed the Foreign Ministry’s entrance exam.”

The wave of public sympathy for the symbolic rubbish collector’s son got the attention of at least one diplomatic outpost in Cairo, prompting the British ambassador to Egypt, John Casson, to announce that all are welcome to work at the British Embassy, including the refuse collector's son.

Despite public awareness, the facts on the ground point to the continuation of the cultural reality that insists that people of lower-class status are not even allowed to strive to become judges or diplomats or police officers, while by virtue of birth the son of a judge is inherently deemed more suitable for the judiciary. Only a few hours after Saber's resignation, social media pages lit up again, this time in opposition to the appointment of Ahmad al-Zind, head of the Judges’ Club, to replace the disgraced Saber. Zind is well known for supporting favoritism in appointing sons of judges to the bench at the expense of qualified top graduates. In one of the Twitter posts of statements by Zind, he said, “It is the haters who are attacking the sons of judges. But, they will be disappointed, because this nepotism will go on year after year, and no power in Egypt will be able to stop it.”

There is no equal opportunity in Egypt.