Egyptian Justice Minister Ahmed al-Zind was removed from his post following remarks deemed insulting to the Prophet Muhammad — but politics may be the real culprit. 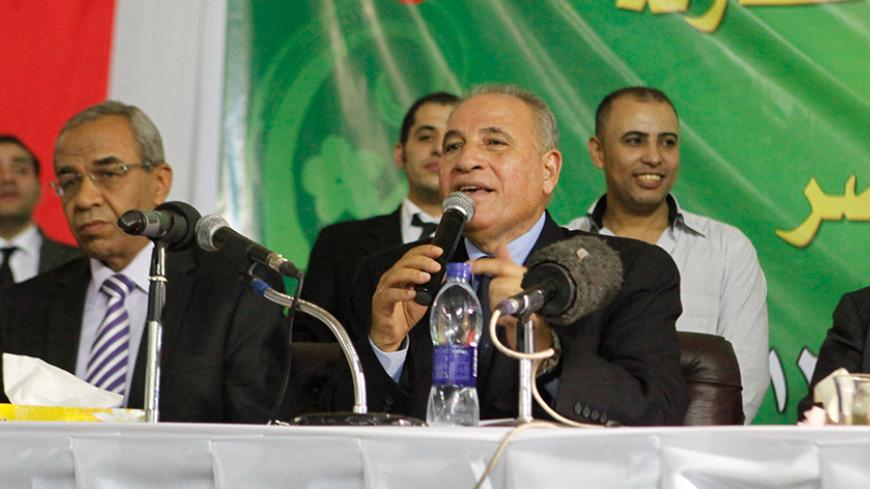 Ahmed al-Zind (C) speaks during a meeting in Cairo on Nov. 24, 2012, when he was head of Egypt's Judges Club. He was dismissed as justice minister March 13. - REUTERS/Asmaa Waguih

CAIRO — On March 13, Egyptian Prime Minister Sharif Ismail issued a decision to dismiss Justice Minister Ahmed al-Zind from his post over remarks that were considered offensive to the Prophet Muhammad.

In an interview on Sada Elbalad TV on March 11, Zind was asked about a case involving the imprisonment of journalists and if it contradicted the constitution. He responded that everyone who breaks the law will be put behind bars “even if it was the prophet himself.”

On the next day, speaking on a call-in show with the same TV program, Zind apologized, saying “I ask God Almighty for forgiveness,” and said his remarks were “a slip of the tongue.”

Zind accused the Muslim Brotherhood, which is labeled as terrorist by the Egyptian government, of being behind the remarks going viral on social media in order to trigger outrage against him. It is worth noting that he was a harsh critic of the group when Brotherhood-affiliated President Mohammed Morsi was in power from June 2012 to July 2013.

Using an Arabic hashtag that translates to #Prosecute_Zind, which was picked up by a large audience in the Arab world and Egypt, activists on Twitter demanded that Zind be referred to the judiciary.

In a statement issued March 13, which did not explicitly name Zind, Al-Azhar warned that “all those involved in public discourse and in the media must respect the name of the prophet. He should not be subjected to any insult, even if it's unintentional.”

Zind is the second justice minister in less than a year to vacate the post over media remarks that triggered outrage. He led the ministry after his predecessor Mahfouz Saber resigned May 11, 2015, amid controversy following his remarks that judges must come from “a respectable milieu" and that sons of rubbish collectors should not become judges.

This isn’t the first time Zind has made controversial statements. On Jan. 28, Zind said in a TV interview, “I would not be satisfied until 10,000 Brotherhood members were killed for every martyr” of the armed forces and the police in the attacks that targeted Egypt since Morsi was ousted.

These statements caused anger and were perceived as “irresponsible.” On Feb. 8, Human Rights Watch called on President Abdel Fattah al-Sisi to condemn the remarks, which according to the organization "advocate the mass killing of Muslim Brotherhood supporters."

On March 13, shortly before the decision to dismiss the minister, the Egyptian Judges' Club issued a statement announcing its commitment to Zind remaining in office, “in order to continue to enhance the judiciary, which has already started to bear fruit.”

The statement pointed at a potential clash between the Judges' Club, which includes 13,000 judges, and the government, Reuters said.

Abdallah Fathi, head of the Judges' Club, told Reuters, “Egypt's judges are sorry that someone who defended Egypt and its people, judiciary and nation in the face of the terrorist organization that wanted to bring it down should be punished in this way.”

Judge Tahani al-Gebali, former deputy head of the Supreme Constitutional Court, told Al-Monitor, “The decision to dismiss Zind is unconstitutional.” She added, “The appointment and dismissal of the justice, interior, defense and foreign affairs ministers consist of sovereign decisions that should be issued by the president alone under the current constitution of 2014, and it is not up to the prime minister to issue such decisions.”

Commenting on whether or not the decision was made following a meeting between Sisi and Ismail — that is, upon Sisi’s directives — Gebali said, “The president shall not delegate sovereign powers. A direct decision shall be issued by the president himself, not through someone else.” She added, "The prime minister violated the limits of his constitutional powers.”

On the reasons behind the dismissal, Gebali said, “There are major questions about this, especially at this time. A Cabinet reshuffle was scheduled to be conducted soon, so why not wait.” She argued that the decision is “a political mistake,” and “Zind’s remarks on the prophet are not sufficient reasons for the dismissal of a minister from his post.”

In a March 19 article in the state-owned Al-Ahram newspaper, Mourid Subhy wrote that the “immediate dismissal came following Zind’s remarks on TV on March 11, in which he implicitly recognized that the murder of Italian youth Giulio Regeni came after he was being tortured, which underscores political suspicion. This goes in line with the Italian suspicions, despite the Egyptian attempts to rule out this hypothesis.”

Egyptian journalist Abdullah al-Sinawi, who is close to Egyptian decision-making circles, wrote an article for Al-Shorouk newspaper March 18 on the reasons for Zind’s dismissal. He said, “The declared reason is different from the real reason. It was declared that the reason is blasphemy against the prophet. Yet, the thing that remained undeclared is that Zind’s presence has become a burden that the ruling regime can no longer stand.”

Gebali added, “Zind’s remarks on the imprisonment of the prophet are not perceived as contradictory to Islam, since he asked God for forgiveness. Legally, a lawsuit cannot be filed for the blasphemy of the religion.” She argued that “under the Egyptian Penal Code, any case in this regard will be dropped because Zind has apologized and asked for forgiveness at the same time.”

Speaking about Zind’s term at the Justice Ministry, Gebali said it was “very positive," noting that he did a lot to advance the situation for both courts and judges, ensuring easy access to the courts. "This is in addition to his positive and progressive stance toward female judges, as a group of female judges were appointed during his term, and he appointed a female judge as his assistant.”