How IS uses water as weapon of war

The Islamic State's expanding control over the water resources of the Middle East will only compound the region's water crisis. 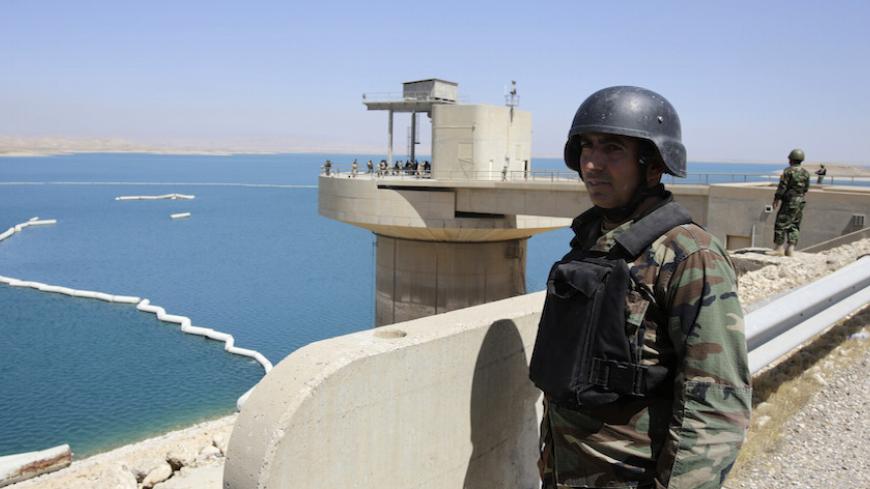 CAIRO — The Middle East is facing a water crisis. As the region experiences conflicts over water and faces the continuous risk of war breaking out, experts on water predict that the Islamic State (IS) aims to exacerbate this water crisis, as evidenced by its efforts to seize rivers and dams in Syria and Iraq, starting in 2013.

The Arab League has worked since 2008 to establish a new Arab convention on water usage, which would establish parameters on how to deal with the water crisis. However, the final draft is still under review because of the reservations of some member states.

PricewaterhouseCoopers, an international consulting organization, has identified numerous regions where the water crisis threatens to transform into a global conflict. Turkey, Syria and Iraq are included on that list, due to the Turkish dams controlling the Tigris and Euphrates rivers. Iran and Iraq are also witnessing a competition over the confluence of the Tigris and Euphrates rivers, known as Shatt al-Arab. Also included is Egypt, Sudan and Ethiopia, which are witnessing a conflict over the Nile. Egypt, Sudan, Libya, Chad and Niger are also experiencing a crisis in relation to an 800-meter (0.5-mile) deep underground water field and the Nubian sandstone aquifer. Libya wants to invest in this aquifer to extend an artificial river and supply its coastline with freshwater.

Mahmoud Abu Zeid, president of the Arab Water Council, told Al-Monitor that the Arab region is facing a crisis because of the lack of rain and available water resources. The Arab region accounts for less than 7% of the world's water reserves, according to Abu Zeid, and less than 1% of the flowing water, while rain does not exceed 2% of the global average.

“Arab water is facing a great danger, which portends the exacerbation of the water conflict given that freshwater resources are limited. However, there is a food gap that increases with the growing population, which threatens a famine by 2025 in the absence of concerted efforts,” Abu Zeid said.

Abu Zeid also warned against IS using water as a weapon. “IS’ expansion has become concentrated in water resource regions in Syria and Iraq, and it is very clear that IS is seeking to acquire parts of Arab water sources," he said. "Given that water represents life, seizing such resources in Arab countries would be very serious and would constitute an inhumane means of pressure.”

IS fighters control most of the upper areas of the Tigris and Euphrates rivers, which flow from Turkey in the north to the Gulf in the south. All of Iraq and a large part of Syria rely on these rivers for food, water and industry. Abu Zeid predicted that IS’ attempts to control Arab water resources would lead to a water crisis that would overshadow the ongoing oil conflict, since water is a matter of life or death.

Abu Zeid said the Arab Water Council is preparing a report on the tense water situation in IS-controlled areas. The council’s experts have monitored a series of serious moves by IS that aim to gain control of Arab water sources as a means to exert pressure, such as the seizing of an Iraqi dam and controlling water resources in Syria. “We will work on raising this problem at the international level because it is a sign of a humanitarian disaster, given the number of countries [IS] is stationed in,” he said.

According to a September 2014 report from the Beirut Center for Middle East Studies, IS considers controlling rivers and dams to be a weapon more important than oil.

IS’ attempts to control water resources are in line with the group's announcement to extend its so-called caliphate from the Levant to Egypt, Ethiopia and the Maghreb, according to the group's caliphate map published in July 2014 on social media. This caliphate would extend into the headwaters of the Nile. The allegiance sworn by Boko Haram in March 2015 to IS emir Abu Bakr al-Baghdadi was probably aimed at supporting the IS conspiracy to control the headwaters of the Nile.

Asked about the Arab Water Council's strategy to confront the water crisis, Abu Zeid said, “We are currently working on maximizing water resources in the Arab region, especially since the Arab water conflict includes Arab-Arab conflicts due to the presence of common rivers between a number of Arab countries, as well as Arab conflicts with other countries, especially since the water quantity that comes from outside the Arab world accounts for more than 60% of the water used in Arab countries.

“This is the threat that prompted us to resort to non-traditional water, especially treated agricultural water and wastewater,” he said. “We are currently working on the direct exploitation of brackish water, which is abundantly found in the subsoil Arab aquifers, in agriculture. We are also seeking to mix this non-fresh water with pure water. We recently issued a manual outlining their uses. Add to this the desalination techniques of seawater that were adopted by several Arab countries, such as Saudi Arabia and the UAE, to face water scarcity.”

The water war is a ghost threatening the Middle East.

Though the poor populations of this region are the only ones paying for the price of the oil conflict, the water wars will not spare anyone.