The human cost of Yemen's war

As the war on the streets of Yemen is raging, 5,000 Yemenis remain stuck abroad, while those inside are suffering and on the brink of facing a major humanitarian crisis with no solution in sight. 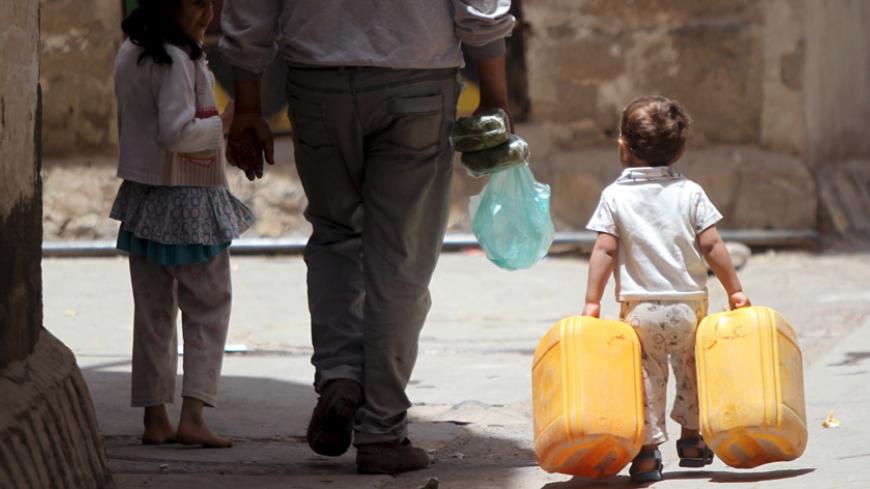 A boy carries jerrycans to fill with water from a faucet amid an acute shortage of clean drinking water in Sanaa, April 20, 2015. - REUTERS/Mohamed al-Sayaghi

“I keep talking to my children about the future and about a country where they could live in peace and security, without religious extremism and wars … until the bombing starts all over again. I leave them and go up to the roof of the house as I cannot bear to see the horror in their eyes.” These are the words of Yehya Abu Rijjal, who spoke to Al-Monitor of his days during the Saudi airstrikes on Yemen.

Since Operation Decisive Storm, which was launched March 26, the death toll has reached 944; on April 17 the number of injured stood at 3,487 as a result of the war between the Saudis and Ali Abdullah Saleh’s militias and the Houthis. Every night, Sanaa flares up under the airstrikes and the anti-aircraft placed by the Houthis and Saleh in the middle of residential areas.

No one is safe in Yemen as death and fear prevail. The bombings do not exclude anyone, not even al-Mazraq refugee camp located in the Hajjah governorate close to the Saudi borders, where at least 45 people have lost their lives. The two warring parties have exchanged accusations as to who is responsible for what is happening. However, the truth is that this war is producing random death and no one is lifting a finger to avoid it.

While Operation Decisive Storm rages, the scene in Aden appears bleaker than ever. The Houthis and Saleh’s forces insist on entering the city and fighting its people in residential neighborhoods. Many are forced to flee their homes, which are being used by Houthi snipers.

One of the city's residents told Al-Monitor on condition of anonymity that he had to leave his home near the airport, where the fighting has intensified, as his building was bombed. People gathered on the first floor when the shelling increased before leaving. He said they felt they were targeted, and indeed, once the residents left the premises, snipers took hold of the building’s roof.

“The shelling intensified the night my wife gave birth by cesarean section in the hospital. I took my 3-year-old son and we stayed with her and our new baby girl for two days. Now we live with my friend’s family, whose house has two rooms and one bathroom only,” he said.

He added, “I had to stop working as I could not even go to my workplace because of the war on the city's streets. I run a car rental office located in an area where the fighting is raging. The cars could have been stolen or burned. I'm starting to run out of money and I feel uncomfortable as we are imposing on my friend’s family. But my wife still needs time to recover and I don't know how long the situation will drag on."

The war is not about daily fear and frustration alone, as basic necessities have become difficult to secure, with the specter of hunger looming on the horizon of a country that has more than 25 million people now stuck with nowhere to go. All land, sea and air routes have been closed and imports have stopped. Yemen imports 90% of basic foodstuffs such as wheat and sugar.

Before the outbreak of the war, Yemen was already suffering from high rates of malnutrition, as half of the population was going hungry or was teetering on the verge of it, according to the World Food Program. Undoubtedly, the war has made matters worse, which means that warnings about Yemen facing a hunger crisis are not mere exaggerations.

“Most bakeries closed in the city of Aden and wheat is now available in limited quantities in certain areas and at very high prices. The price of a bag of wheat has risen to more than $50, while a gas canister is now [sold] for $20,” Nashwan al-Othmani, a journalist in Aden, told Al-Monitor.

“My breakfast consists of biscuits and my dinner of pasta or rice. Today we are still lucky to find food, but perhaps tomorrow, we will not be as lucky. The situation is much worse in governorates such as Ad Dali and Lahij,” he added.

Ghada Shaibi told Al-Monitor about her uncle in Ad Dali governorate. He died of kidney failure as he could not be transported to the hospital for his weekly dialysis because of street blockades.

Hospitals have run out of medicines, and some surgeries are performed without anesthesia. Moreover, the Red Cross could not deliver aid to Yemen during the first two weeks of the war.

The situation in Yemen has turned desperate with power outages going on for days and cars in long lines at gas stations looking for diesel used by farmers to pump water. The battles have targeted power plants and have reached the city of Marib, which supplies Yemen with energy and oil.

Some Yemenis were abroad when the war broke out. In Cairo, 5,000 Yemenis are stuck and cannot return to their families. Most of them have used up all their money and bank transfers between Yemen and the rest of the world have ceased.

Yasmin al-Naziri was on a business trip to Cairo and was supposed to return to Sanaa the night the shelling started. She is divorced with a 5-year-old child, whom she has not seen for almost a month. She tried hard to get her daughter out of Yemen or to return there to see her, but to no avail. All routes are blocked. "I'm on the phone with her almost all the time during the shelling. It breaks my heart to hear her crying because she is scared and there is nothing I can do,” Naziri told Al-Monitor.

In the eyes of the world, Yemen is another battlefield between Saudi Arabia and Iran. The international community has forgotten that there are 25 million people who suffer from this war and who were not even mentioned in UN Resolution 2216 that was issued April 14. Not one word has been uttered about a humanitarian truce or ways to alleviate the suffering. Yemenis are paying dearly for a war they did not want — a war that is taking its toll on Yemeni society, especially children, who are not only victims of the war and fighting but are enrolled to fight. The number of child recruits has reached one-third of the number of fighters who are tearing the country apart in this civil war, without making any distinction between armed forces or the innocent. They have all become pawns on the battlefield in a society controlled by a corrupt elite in a troubled region.