A group of American executives found a warm welcome in Iran and plenty of company from other foreigners investigating post-sanctions business opportunities. 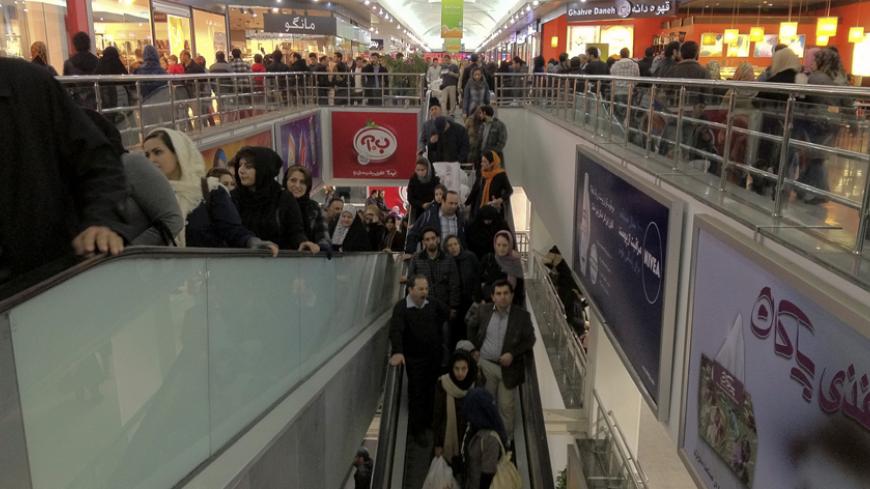 A view of the inside of a shopping mall is seen in northwestern Tehran, Feb. 3, 2012. - REUTERS/Morteza Nikoubazl

Ned Lamont thought he would be a pioneer when he set off earlier this month on his first trip to Iran, but the Connecticut businessman and former politician discovered otherwise when he walked into the Parzian Azadi Hotel in north Tehran.

“I thought we would be like Livingstone,” Lamont told Al-Monitor, referring to the famous 19th century explorer of Africa. But “everybody is already in Iran. There were groups from 20 different countries.”

The founder and chairman of Campus Televideo, which provides video and data services to US colleges, and a former candidate for the US Senate and governor of Connecticut, Lamont joined 21 other Americans in early April for a journey organized by the Young President's Organization and World President's Organization — groups that connect CEOs from around the world.

The trip combined stops at tourist sites in Shiraz, Efahan, Qom and Tehran with pep talks from Iranian officials and business consultants. The Americans’ takeaway: Iranians are anticipating that nuclear-related sanctions will be lifted soon and foreign companies should get ready now to invest and trade with Iran again.

“It was a tour and also included some presentations about the economy, business and startup ecosystems there,” Christopher Schroeder, a venture capitalist who invests in technology startups, told Al-Monitor. “We heard from CEOs, think tank experts, investors, bankers and entrepreneurs, in addition to our tour guides.”

Schroeder, who took a similar trip to Iran last year, found “a very strong sense of hopefulness that things would open up. … Iran has been a very sophisticated global economic player even with the sanctions, has strong infrastructure, significant young talent. So they are ready to go and are in many ways long in motion.”

Sanctions, coupled with economic mismanagement under the presidency of Mahmoud Ahmadinejad, pushed the Iranian economy into recession three years ago at the same time that inflation roared to above 40%. Iran’s economic isolation was never total, however, and Lamont said the trade restrictions in some ways benefited local entrepreneurs.

“Sanctions are a little like a tariff in that they keep competition out,” Lamont said. So there are now Iranian copies of e-businesses such as a Persian Craigslist, he said, as well as knock-offs of Kentucky Fried Chicken and other US franchises.

Since President Hassan Rouhani took over in 2013, inflation has subsided to about 15%, wild swings in the value of the rial have abated and the economy has started growing again. However, government and semi-state organizations still control much of the economy, contributing to corruption, and unemployment — particularly among educated youths — is high.

Many Iranians are hoping for more investment in the private sector, which they say could bring major benefits to society as a whole.

“Once prominent multinational firms enter the Iranian market, economic reform will pick up speed,” predicted Amir Handjani, an Iranian-American businessman who met with the American group in Tehran. “Foreign firms will look for legal and structural reforms so they can feel secure about putting down roots. They will want to make sure their investment in Iran over the long term is protected.”

European and Asian countries are likely to benefit sooner from easing sanctions on Iran, particularly in the banking and oil sectors. But Schroeder said US companies could also find “opportunities across the economy, from … machine tools to food services and pharmaceuticals to technology for consumers and health care,” as well as “hotels and services in their spectacular tourism locations.”

Members of the group said they were particularly struck by the warm reception they got from ordinary Iranians. Lamont said they had free time to wander and engaged in a vigorous game of pickup volleyball with a bunch of young Iranians in Tehran’s Laleh Park.

Linda Mason, founder and chairman of Bright Horizons, a provider of early education and preschools, told Al-Monitor that she got separated from the rest of the group in the huge park. “A young man came up to me and said, 'You remind me of my mother and she would be very happy if I helped you, so I’m going to help you find your group.'”

Mason is a leader in residence at Harvard’s Kennedy School this year, and said she had visited numerous other Middle Eastern countries as global chair of the charity Mercy Corps. Still, Iran was “so unlike what I expected,” she said. “Except for the headscarves, [Laleh Park] could have been Boston Common.”

She said she often broke off from the group to visit shops and walk the streets and “felt very safe.” She said she met many young people and artists who spoke openly about their frustrations, but with an occasional look over their shoulders to see who else might be listening. “The country is largely young, educated, urban and secular,” she said, in contrast to an “aging Islamic theocracy.”

Members of the group said they were prepared for anti-American graffiti but instead found many more references to the 1980-88 Iran-Iraq War, which killed or injured nearly a million Iranians.

“I didn’t know it went on for eight years and that it reinforced the rule of Ayatollah [Ruhollah] Khomeini,” Lamont said. “That war is like yesterday for these folks.”

Before he left for Iran, Lamont said, his friends fell into two camps: those who thought he was crazy and advised him to take a bulletproof vest and those who said, “We want to be on your next trip.”

Lamont said he hopes to organize a forum in Connecticut to publicize his impressions and do some lobbying against what he regards as excessive congressional interference in the nuclear negotiations.