How will Turkey benefit from lifting of Iran sanctions?

Turkey faced substantial losses with declining exports to Iran because of the embargo. Now that easing of sanctions is a possibility, however, political ambitions and contradictory positions may impede recovery. 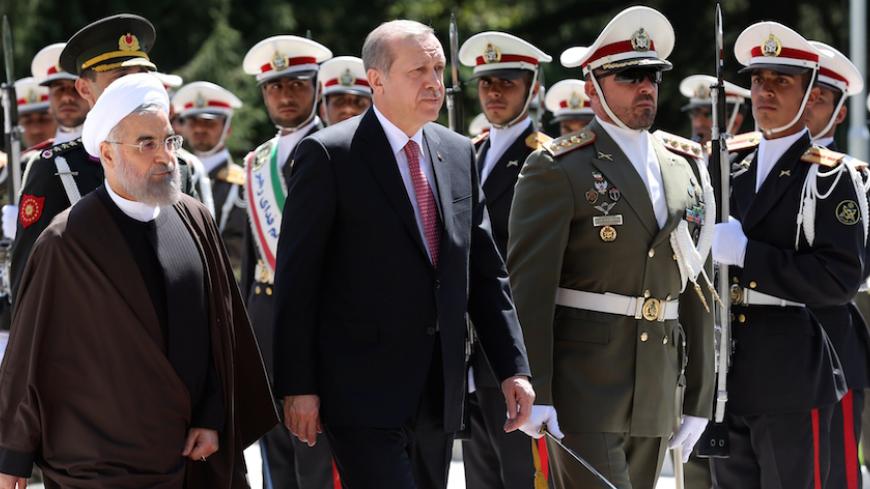 It is widely believed that Turkey will benefit from the lifting of the embargo on Iran as part of the nuclear deal. Turkey’s exports to Iran were severely restricted because of the embargo. The two countries are now trying to resurrect their volume of trade. That six ministers accompanied President Recep Tayyip Erdogan on his April 7 Tehran visit signals Turkey’s hope to boost trade, as does Erdogan's signing a series of accords on education, health and the environment.

Riza Eser, chairman of the Turkey-Iran Business Council, said the $13.7 billion volume of trade in 2014 could climb to $30 billion in two years.

One of the major issues discussed during the visit was Turkey’s natural gas imports from Iran. Erdogan noted that Iran’s natural gas is the most expensive that Turkey buys, adding: “If they push the price down, we could significantly increase the natural gas we buy from Iran.”

Natural gas is the main commodity of trade between the two countries. Turkey buys 10 billion cubic meters of Iranian natural gas each year. But Turkey, which has sought out international arbitration because of the high price, demands a 25% reduction. Minister of Energy Taner Yildiz said the arbitration may be concluded by May 2015 and that Turkey expects a new offer from Iran.

Iran charges $487 for 1,000 cubic meters of natural gas. Turkey pays $418 for the same amount of gas from Russia, which has announced another 6% discount.

Another important development is also in the offing. Discussions are being held regarding the transport of Iranian natural gas to Europe via the Trans Anatolian Natural Gas Pipeline (TANAP), which will traverse Turkey. Iran may be considering joining TANAP, currently owned by Azerbaijan, Turkey and British Petroleum. The president of the Azeri company SOCAR, which owns 58% of TANAP shares, said, "If they make an appropriate offer, we are thinking of selling shares to Iran. They have no other alternative than TANAP to move their natural gas to Europe."

To join TANAP would mean an increase in Iranian production, as European countries that are in crisis with Russia are searching for new natural gas resources. According to Turkish Foreign Ministry records, after Russia, Iran possesses the second largest natural gas reserves, at 17%. But it can only work on 48% of its reserves.

Construction started last month on the 1,850-kilometer (1,149-mile) TANAP project, which will carry gas from Azerbaijan’s Shah Deniz fields to Europe. The first phase of the project will be finished by June 2018, with its annual capacity of 16 billion cubic meters set to eventually reach 31 billion cubic meters.

Turkey also buys crude oil from Iran, which owns 10% of global oil reserves. Iran was meeting 51% of Turkey’s oil demand, but the import patterns have changed with the embargo and US pressure on Turkey to curtail its oil purchases from Iran and the beginning of oil flow from northern Iraq to Turkey’s Ceyhan. Imports from Iran declined to 28.5% of Turkey’s oil purchases, while the oil bought from Iraq went up to 32% from 10%, making northern Iraq Turkey's main supplier of oil.

Turkey’s Ministry of Economy declared Iran “the target country to increase trade.” In 2012, when the embargo was imposed, the volume of trade had reached the record level of more than $21 billion, with $9.9 billion in exports and $11.9 billion in imports.

What can Turkey sell to Iran?

Turkey’s Ministry of Economy monitored the changes in the Iranian economy and determined which Turkish sectors could potentially export to Iran. The ministry determined potential in the sectors of "tourism, energy, banking, petrochemicals, telecommunications," as well as the automotive and transportation sectors. The ministry added that there are "opportunities for construction of airports, highways and hotels," in addition to "maritime freight in the Caspian Sea and the Black Sea."

According to the ministry, about a hundred Turkish companies are active in Tehran. In Tabriz, 38 Turkish investments are active in the country’s only foreign investment zone. Forty percent of Iran’s population are Azeris of Turkic origin. Turkish television programs are watched widely all over the country, meaning a large segment of the population speaks Turkish and is interested in Turkish products.

Turkey wants Iran to be its outlet to regional countries, as it used to export to Middle East and Gulf countries via Syria, but lost this route because of the war in Syria. Egypt announced it will annul the accord with Turkey permitting roll-on roll-off (ro-ro) ferry operations and land transportation. Iran thus remains the only option for Turkey to access Middle East markets. Cetin Nuhoglu, the chairman of the International Transporters Association, said, “Agreements with Iran are finalized. After April 22 we will be shipping through that country.”

The lifting of the embargo, the interdependence of Iran and Turkey, and the Turkish population in Iran could play key roles in boosting trade, but both countries have ambitions for regional leadership. Turkey contradicts Iran with its Yemen, Syria and Iraq policies. Furthermore, Erdogan angered Iran by taking the Saudi side in the Yemen conflict. As such, one should not totally dismiss the potential of such issues to undermine trade relations.