Once it appears in Middle Eastern skies, the F-35 fighter aircraft may alter how wars are waged in the region. 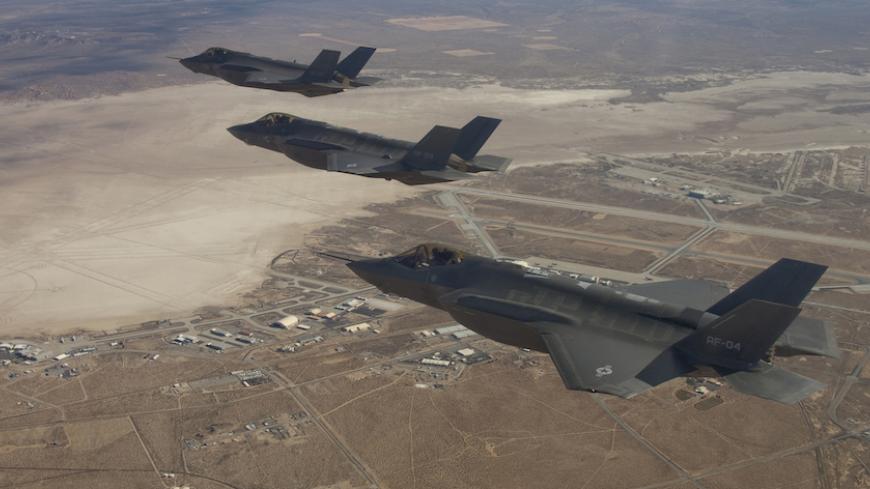 Three F-35 Joint Strike Fighters (rear to front) — AF-2, AF-3 and AF-4 — can be seen flying over Edwards Air Force Base in this Dec. 10, 2011, in this handout photo provided by Lockheed Martin. - REUTERS/Lockheed Martin/Darin Russell

US Vice President Joe Biden delivered a speech in Washington April 23 on the occasion of Israeli Independence Day celebrations. He announced that in 2016, the United States will deliver two F-35 Joint Strike Fighters to Israel. Yet, the debate still rages on the cost-effectiveness of the Joint Strike Fighter project, with rumors circulating that the project may be terminated due to its phenomenal $1 trillion budget.

Biden indicated that the F-35s may be fully operational for the first time in the Middle East next year. Will the F-35 totally revamp traditional approaches to warfare in the Middle East? This question is timely because in recent years we have seen a more “militarized Middle East,” with the ongoing civil war in Syria, the expansion of the Islamic State threat to Africa and Afghanistan, clashes in Yemen, increasing sectarian divides and the Iran-Israel conflict.

Actually, it is not surprising that Israel will be the first to use F-35s in the Middle East. Israel's privilege is rooted in the US administration's strict adherence to the principle of "qualitative military edge," dating back to the term of President Lyndon B. Johnson (1963-69). According to this principle, it is a vital US interest for Israel to preserve its military deterrence at all times and maintain its supremacy in military leadership, training and tactics.

Israel's Ministry of Defense announced in February that it had signed an agreement with Lockheed Martin to purchase 14 F-35s at a cost of $100 million each. Israeli officials said their goal is to have two F-35 squadrons of 25 planes each by 2021.

Many NATO member countries and other close US allies will participate in the development of the F-35 project, which for many marks the beginning of a new era in air warfare. Only two Middle Eastern countries, Turkey and Israel, will participate.

Turkey will be the only other country in the region besides Israel to fly the F-35, and Turkey is just as involved in the project as Israel. The Turkish air force has deemed the Joint Strike Fighter program a "prestigious project" that is a "concrete step to space." Turkey plans on purchasing 100 F-35A planes in 2021 to replace its inventory of F-4E Phantom II aircraft.

The Turkish air force's avionics and weapons systems, including 54 F-4Es, were modernized to serve until 2020. These models were re-branded as the F-4E 2020 Terminator. Defense analyst Balkan Giray Coskun, speaking to Al-Monitor in Istanbul, said the F-4Es will be phased out by 2020 and replaced by F-35s, first at the Malatya air base and then at Eskisehir air base. Furthermore, the Turkish navy’s TCG Levent LPD project, an amphibious warship that can transport landing forces for expeditionary missions, will be capable of supporting the F-35Bs. This will enable Turkey to deploy F-35s from the sea.

What kind of warplane is the F-35?

Arda Mevlutoglu, a defense analyst and space engineer, spoke to Al-Monitor in Ankara, saying that the Joint Strike Fighter project seeks to meet the operational requirements of the air force, navy and marines through a single platform. This platform was designed to meet fifth-generation needs such as stealth capability, advanced avionics, high-performance engines and network-centric combat structures. The F-35 has coped with the question of commonality between air, land and naval elements by producing three versions: F-35 for the air force; F-35B to replace AV-8B Harriers for the marines; and the F-35C for the navy, which can land and take off from aircraft carriers.

Mevlutoglu said: "The F-35 is not an aircraft with just stealth technology. It is an aircraft that will perform real-time data exchanges with advanced sensors and communications, and with that feature will perform duties of command-control and intelligence that go beyond classical fighter aircraft. In short, F-35 is a multi-role warplane that will operate against the depth of the enemy lines with interdiction against well-protected targets, close air support and suppression and destruction of enemy air defenses simultaneously. With 2,400 F-35s planned [to be sold by] the US in 10 years, the plan is to have a total of more 3,000 aircraft in all countries involved in the project.”

If the cost issues are overcome, the F-35 is likely to become the main combat aircraft of NATO and other US allies. According to Mevlutoglu, this also means that all the countries flying the F-35 will possess a US-brand net-centric combat structure. As such, the F-35 project will not just boost the military capabilities of the countries using the aircraft, it will also profoundly affect their strategic military cultures as they standardize to a US-based system.

How will the F-35 affect the Middle East?

Here is an outline of the F-35’s potential influence on the Middle East security environment:

The emergence of F-35s in the Middle East — once the cost debate is sorted out — will alter the region's prevailing security environment. But assessing the role of the F-35 through only the lens of military capabilities could produce misleading conclusions. The F-35 will create a new military-technological discourse in the current regional conflicts — a discourse that will affect the strategic cultures of user countries, thus changing how they fight.

As high-tech weapons systems like the F-35 become operational, one question has gained more prominence in the defense realm: If technology is the answer, then what was the question?