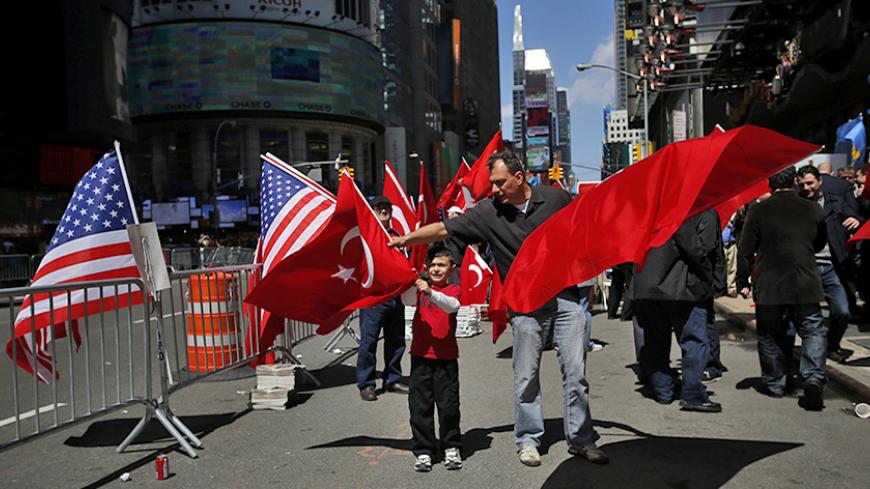 People take part in a protest in support of Turkey's position on the 1915 mass killing of Armenians in the Ottoman Empire, at Times Square in New York, April 26, 2014. - REUTERS/Eduardo Munoz

Pro-Turkey groups are drawing attention to Yerevan's ties to US foes as the debate over whether to recognize an Armenian genocide intensifies.

The allegations have recently made their way into congressional hearings, lawmakers' correspondence and newspaper op-eds ahead of the centennial of the Ottoman-era massacres April 24. Critics say the accusations are a futile attempt to exploit congressional anger at Iran and Russia in a bid to derail a bipartisan genocide resolution commemorating the deaths of an estimated 1.5 million people.

"Questions about Armenia's banking relationship with Iran, authorized, pushed prodded and cajoled by Russia is new and concerning," Rep. Darrell Issa, R-Calif., said at a Feb. 11 House Foreign Affairs Committee hearing on the "global threat" posed by Iran. "I look forward to questions, particularly questions on Russia’s involvement through Armenia in the backdoor circumvention of the sanctions as they are in place today."

Turkish Progress, a new group of Turkish-Americans opposed to the genocide resolution, highlighted Issa's comments the next day in its very first press release. The group went on to suggest that by working with Turkey, "Armenia can reclaim its national sovereignty, be truly independent from Tehran and Moscow, and prevent alienating itself from the West."

Later that month, Rep. Bill Shuster, R-Pa., began circulating a letter that urges lawmakers not to sign on to a genocide resolution. Rep. Robert Dold, R-Ill., introduced such a resolution March 18; it has 55 co-sponsors.

"While many of Turkey's neighbors continue to pivot to Tehran and Moscow, Turkey has remained loyal to the West, helping to protect our interests and countless American lives in the region," Shuster wrote. "Turkey hosts Raytheon missiles despite the pressure exerted by Russia and Iran."

And in mid-March, Turkish Progress hired former Florida Republican Rep. Connie Mack at Levick Strategies to lobby on "issues related to the advancement of Turkish-Armenian relations." Three weeks later, Rep. Curt Clawson, R-Fla. — Mack's successor in the Tampa congressional district — began trying to gather supporters on a resolution that calls for creation of a task force featuring Turks and Armenians "charged with working toward equitable, constructive, stable, and durable Armenian-Turkish relations for the next hundred years, based upon the two countries' common interests and the United States' significant security interests in the region."

Other pro-Turkey groups have piled on.

"Although widely assumed to be a solid ally, Armenia has by all indications quietly moved toward a strategic rapprochement with Iran — and, by extension, Russia — that for starters will help U.S. adversaries circumvent the critical provisions of the Iran Sanctions Act and sanctions against Russia," former Indiana Republican Rep. Dan Burton wrote in a recent op-ed for the Daily Caller. Burton is the chairman of the Azerbaijan America Alliance, which lobbies for better US ties with a country that is extremely close to Turkey.

Allegations that Armenia is helping Iran circumvent sanctions date back to 2012, when Reuters reported about concerns of illicit banking transactions. The tiny landlocked country also has close military, energy and trade ties with Russia, and joined the Moscow-dominated Eurasian Economic Union earlier this year.

Armenia's champions on Capitol Hill say the allegations of close ties with Iran and Russia won't have much impact regarding the genocide resolution. They say Armenia has no choice but to deal with the region's actors, and the United States should offer alternative options rather than push the country deeper into the arms of its neighbors.

"I don't think that argument has much traction. Armenia is in a very difficult position, because it's so dependent on Russia," said Rep. Adam Schiff, D-Calif., whose district includes one of the largest Armenian-American populations in the United States. "I think people are quite pragmatic about that, and I don't think that will influence the recognition."

Indeed, Issa himself told Al-Monitor on April 16 that he intends to co-sponsor the resolution. He said he'd like for it to come up for a vote quickly.

Schiff said Armenia's ties are one of the "weaker" arguments Turkish interests have made in trying to derail the genocide bill.

"I think they're throwing everything at the wall to see what sticks," Schiff told Al-Monitor on April 16, four days after Pope Francis called the events of 1915 the "first genocide of the 20th century" and urged world leaders to speak up "with a firm sense of duty, without ceding to ambiguity or compromise."

"They have to be enormously concerned with the centennial," Schiff said, "but even more acutely in the wake of the pope's announcement."

More successful have been Turkey's repeated warnings that calling the events of 100 years ago a genocide would do grave damage to US ties with a NATO ally and a key player in the war against the Islamic State — a message that has long resonated with House Speaker John Boehner, R-Ohio, who met with Turkish parliament Speaker Cemil Cicek late last month and has yet to show any indication that he will allow the resolution to come up for a vote.

"What happened 90 years ago ought to be a subject for historians to sort out, not politicians here in Washington," Boehner told Fox News in 2007, when he was minority leader. "And I think bringing this bill to the floor may be the most irresponsible thing I’ve seen this new Congress do this year. Turkey is a very important ally in our war against the terrorists — in a very strategic location in the world. They’ve been a great ally of ours. They are very upset about this resolution, and the speaker should not bring this to the floor.”