The reality television star is informally lobbying for recognition of the Armenian genocide. 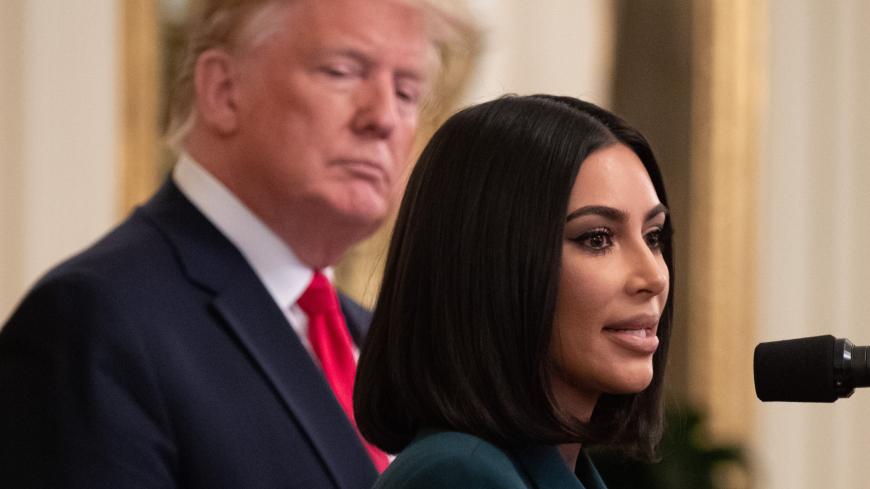 Kim Kardashian speaks alongside US President Donald Trump during a second-chance hiring and criminal justice reform event in the East Room of the White House in Washington, June 13, 2019. - SAUL LOEB/AFP/Getty Images

The day after Rep. Adam Schiff introduced his resolution to recognize the World War I-era Armenian genocide, his fellow California Democrat Jackie Speier had a second champion in mind.

Addressing Armenian-Americans at the annual Capitol Hill commemoration April 9, Speier told them that they had a “secret weapon” in their effort to convince President Donald Trump to take a similar stance.

“I think we all need to tweet to Kim Kardashian — seriously — to ask her to join us in getting the president to take that action,” Speier said at the event organized by the Armenian National Committee of America.

The comments drew initial laughter from the audience, quickly followed by a loud round of applause — a tacit acknowledgment that the reality television star has emerged as a key ally on the issue. As the House of Representatives voted overwhelmingly 405-11 today to defy Turkey and pass Schiff’s resolution, Kardashian West’s ties to both Armenia and the Trump administration are coming into full focus.

Armenia’s government does not employ lobbyists, a review of federal lobbying records shows. And Aram Hamparian, the executive director of the Armenian National Committee of America, said in an interview with Al-Monitor that while the group welcomes public support from famous advocates such as Kardashian West, passage of the resolution was a grassroots effort by thousands of supporters “and not just over the last few weeks, but for several decades.”

Still, the celebrity diaspora member is uniquely positioned to advocate for recognition of the Armenian genocide, having helped lead the successful push for federal sentencing reform and for Trump to grant clemency to Alice Marie Johnson, who was serving a life sentence on drug charges.

For years, Kardashian West has evoked the memory of her Armenian-American father, the late Robert Kardashian, to publicly press for the United States to recognize as genocide the massacre of more than 1 million mostly Christian Armenians. But that advocacy has taken on a new dimension in recent months, with Kardashian West discussing the issue in one-on-one meetings with top officials in Armenia, personal chats with members of Congress and text messages to senior presidential adviser Jared Kushner.

In a July interview with The Wall Street Journal, she said she had recently texted Kushner, whom she bonded with while advocating for criminal justice reform, about the topic of Armenia. During that same interview she took a phone call from Speier, who repeated her appeal that Kardashian West bring up the issue directly with Trump.

Kardashian West promised to bring it up during a subsequent July visit to the White House, telling her publicist, “I want to make that my mission. It would make my dad so proud,” according to The Wall Street Journal. Representatives for Kardashian West did not respond to requests for comment about the status of those talks.

That advocacy reached new heights earlier this month when she traveled to Armenia, where she said she hopes to relocate manufacturing of her Skims fashion line after taking flak for production in Turkey. During her visit, she reportedly made verbal agreements with political leaders to press their government’s case with US officials.

We made a deal with @KimKardashian that she will visit #Armenia more often. pic.twitter.com/bNlxRl0JjN

In an Oct. 9 Twitter post featuring a selfie with Kardashian, Prime Minister Nikol Pashinyan wrote, “We made a deal with @KimKardashian that she will visit #Armenia more often.” The pair discussed “the process of international recognition and condemnation of the Armenian Genocide,” the prime minister’s office said in a statement. She separately had dinner with Armenian President Armen Sarkissian and told Armenian news outlets that while she hadn’t lobbied Trump himself, she does “talk about it with people internally at the White House.”

During that visit, Kardashian West ran into Speier and Rep. Judy Chu, D-Calif., who were also visiting the country. Speier posted a photo of the trio on her Twitter account, writing, “Talking to @KimKardashian about our shared American heritage and goal to see the US once again formally recognize the #ArmenianGenocide.”

Talking to @KimKardashian about our shared Armenian heritage and goal to see the US once again formally recognize the #ArmenianGenocide. pic.twitter.com/XGffbZAfcr

“The thrilling thing is that she told us that she wants to see the Armenian genocide resolution passed,” Chu told Al-Monitor. “She wanted to do it in honor of her father, who’s Armenian of course. So she had had the meeting with the prime minister right before ours and I believe that it was productive and that it created an even closer tie between her and Armenia.”

Congress last recognized the genocide in 1984, while the Ronald Reagan administration issued a proclamation to that effect in 1981. Since then, successive administrations have refused to use the term to avoid angering Turkey. President Barack Obama promised to recognize the Armenian genocide on the campaign trail, but never fulfilled that pledge while in office. And while 100 lawmakers signed a letter asking Trump to recognize the genocide in 2018, Trump instead opted to continue condemning it as “one of the worst mass atrocities in the 20th history” in an April 24 statement last year.