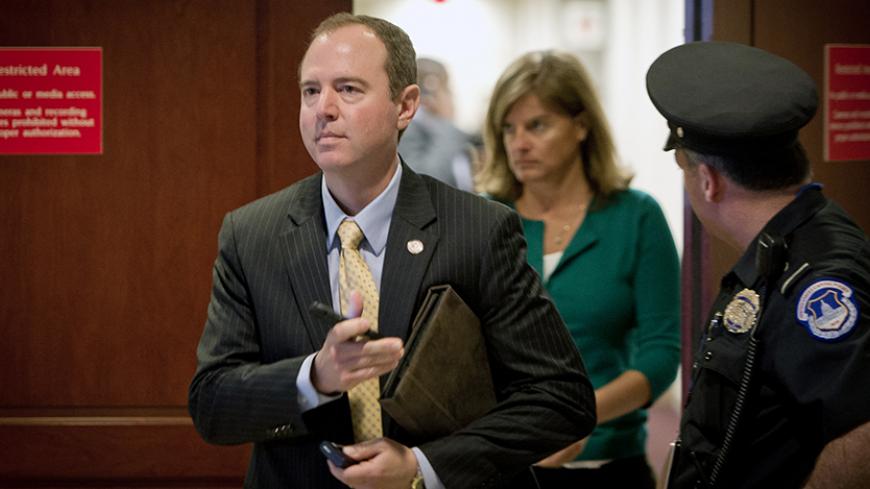 Rep. Adam Schiff, D-Calif., leaves the room after a hearing at the US Capitol in Washington, Nov. 16, 2012. - AFP/Getty Images/Mladen Antonov

US lawmakers and Armenian-American groups teamed up March 18 to unveil legislation recognizing the death of an estimated 1.5 million Armenians in the waning years of the Ottoman Empire as a genocide.

The resolution marks 100 years since the arrest and subsequent massacre of 200 Armenian community leaders in Istanbul on April 24, 1915. It is vehemently opposed by Ankara, and the Obama administration has privately warned that its passage would further strain US-Turkish relations.

"I can't imagine a more important time, given what's going on around the world and given that is the 100th anniversary of the genocide," co-sponsor Adam Schiff, D-Calif., said at a news conference announcing the effort.

The Armenian Genocide Truth and Justice Resolution has attracted at least 43 co-sponsors to date and is modeled after similar efforts that have failed in recent years. It calls on Obama to press Turkey for "full acknowledgment of the facts and ongoing consequences of the Armenian Genocide" as well as a "fair, just, and comprehensive international resolution of this crime against humanity."

The full House passed genocide legislation in 1975, while similar efforts have cleared the House Foreign Affairs Committee in 2000, 2005, 2007 and 2010. Turkey in the past has reacted by recalling its ambassador to Washington and threatening US access to the Incirlik air base.

The Turkish Embassy in Washington and the State Department did not respond to requests for comment.

Separately, Armenian Caucus co-chairs Frank Pallone, D-N.J., and Robert Dold, R-Ill., are circulating a letter to Obama urging him to live up to his strong rhetoric when he was in the Senate and formally recognize the events of 1915-1923 as a genocide. Dold is the main sponsor of the March 18 resolution.

On the campaign trail in 2008, Obama shared his “firmly held conviction that the Armenian genocide is not an allegation, a personal opinion, or a point of view, but rather a widely documented fact supported by an overwhelming body of historical evidence.” He made the remarks after writing to then-Secretary of State Condoleezza Rice to denounce her decision to recall the US ambassador to Armenia, John Evans, after he used the term "genocide."

“An official policy that calls on diplomats to distort the historical facts is an untenable policy,” Obama said at the time. “As president, I will recognize the Armenian genocide.”

Several lawmakers at the March 18 event denounced the president's failure to do so thus far.

"Candidate Obama was eloquent in terms of recognizing that the Armenian genocide actually happened," said Rep. Anna Eshoo, D-Calif., one of two Armenian-American members of Congress along with Rep. Jackie Speier, D-Calif. "We are calling on President Obama to continue and match the words he spoke when he was candidate."

Rep. Brad Sherman, D-Calif., sharply condemned Turkish influence in stopping the US from speaking its mind.

"We need to show the government of Turkey that we cannot be cowed," Sherman said.

"It's critical for Turkey to step forward. How would America have an alliance with a government in Berlin that denied the Holocaust? How would we assume moral leadership if we denied slavery?" he said. Only when it assumes its history "will Turkey be a modern country, worthy of the role that it wishes to play on the world scene."

Sherman was one of at least three lawmakers who brought attention to Adolf Hitler's infamous declaration ahead of the 1939 invasion of Poland: "Who, after all, speaks today of the annihilation of the Armenians?"

"Genocide denial is not just the last step in a genocide," Sherman said, "it is the first step in the next genocide."

Others highlighted the slaughter of Christians in Syria and Iraq at the hands of Islamic State militants today.

Armenian-American activists said the resolution was about paving the way for a better future as much as it was about commemorating the past.

"We know that the only durable for Armenians and Turks to build a brighter future together is a just resolution to the Armenian genocide," said Aram Hamparian, executive director of the Armenian National Committee of America (ANCA). He condemned the "gag rule" Turkey imposes "on how we can speak."

And Bryan Ardouny, executive director of the Armenian Assembly of America (AAA), said Armenia would not be safe as long as it has an "overarmed and unrepentant" Turkey as a neighbor.

Turkey for its part has argued that relations with its Armenian minority have greatly improved under President Recep Tayyip Erdogan, including reopening long-abandoned Christian churches. Ankara's army of lobbyists invariably makes the same point in its all-out effort to stop "genocide" resolutions from moving forward.

Schiff, whose Glendale district is home to one of the largest Armenian communities outside of Armenia, said he met with Erdogan in Ankara late last year and was not convinced his efforts at reconciliation were genuine.

"It was not my sense at all that he was committed to having a free and open dialogue about this in Turkey," Schiff said in response to a question from Al-Monitor. "I think we have seen some backtracking, but I don't think there was ever really that commitment in the first place."

He said Turkish pronouncements every April seemed designed to "thwart" US action recognizing the genocide.

"The reality is I think what we are doing here really propels Turkey to move forward," Schiff said. "And I think we can't let up on that pressure."