The inequitable distribution of resources and political and social opportunities between the West Bank and Gaza Strip is deepening the rift between the two territories, feeding people’s growing dissatisfaction on each side. 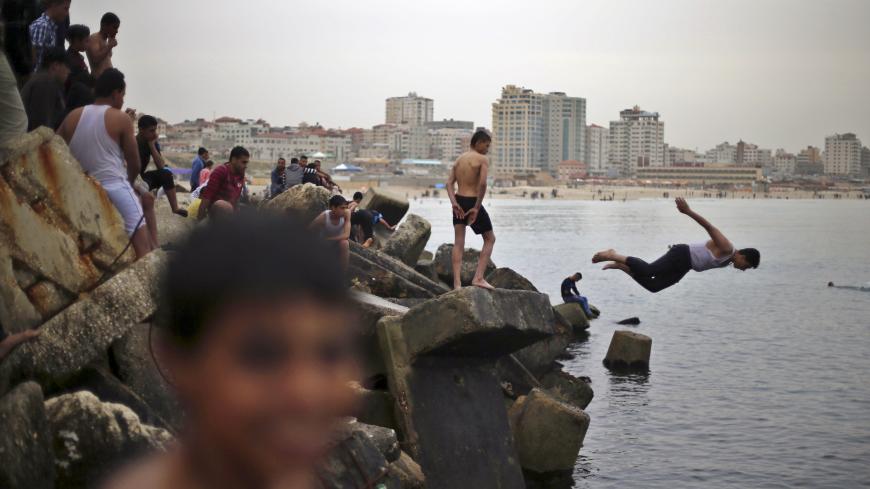 A Palestinian boy jumps into the Mediterranean Sea as he enjoys a warm day with others at the seaport of Gaza City, March 27, 2015. - REUTERS/Mohammed Salem

RAMALLAH, West Bank —​ “Where are you from?”

“You must be kidding,” he answered. “You can’t be from Gaza.”

“You don’t speak with an Egyptian accent,” he said.

This was part of a conversation that took place between Al-Monitor and a taxi driver in the city of Ramallah.

“The people of Gaza speak with an Egyptian accent since they are close to Egypt and are influenced by the Egyptian dialect. I have met many Gazans and they tend to have an Egyptian accent,” Mahmoud Saeed, the taxi driver, said.

Palestinians in the West Bank and the Gaza Strip live in two different, geographically separated areas. Moreover, since mid-2007 the political breakup has widened the geographical gulf and caused the two parts to drift further apart, and have even become governed by different rules and regulations.

Israel separates the Gaza Strip from the West Bank and does not allow the movement of people between the two sides. It only allows the movement in one direction, which is from the Gaza Strip to the West Bank, and under certain humanitarian conditions. This includes the cases of Palestinian patients from Gaza receiving treatment in Palestinian hospitals in Jerusalem and other cities in the West Bank. Meanwhile, the number of traders who are allowed to enter the West Bank depends on the political developments. For instance, the second intifada led to a dip in the numbers of traders allowed access to the West Bank. Israel also allows access to some Palestinians working with international organizations.

According to a restaurant manager in Ramallah, Issa Sarhan, the Palestinian Authority (PA) spends most of its budget on the Gaza Strip, especially following the latest war. Meanwhile, millions of Palestinians in the West Bank are not benefiting from the budget.

“Gaza is enjoying billions of dollars donated by countries. The PA is spending the money there, where Hamas is ruling. Meanwhile, the Palestinians in the West Bank suffer from unemployment, limited development and growth because of the Gaza Strip,” Sarhan told Al-Monitor.

“This is injustice. Gaza has been receiving in-kind and physical donations, while the West Bank is suffering, the PA is turning a blind eye and Hamas refuses to hand over power,” he added.

Mohammed Rimawi, who works with a nongovernmental organization, believes that Hamas and its security apparatuses are keeping a strong grip on the people of the Gaza Strip, intervening in their personal affairs and not allowing them to roam the streets at night.

“I do not think that Hamas allows people to walk in the streets at night without being stopped and asked for their IDs. Hamas is keeping a firm security grip on the situation,” he told Al-Monitor.

In the city of Ramallah, there is space for personal freedom and for interaction between genders and when it comes to girls’ freedom to go out. Alcoholic beverages are also served in many restaurants and cafes in the city, unlike in the Gaza Strip, where Hamas imposes restrictions on alcohol and bans it in the area.

Rima Saeed, an employee at an insurance company, sits with her friends on the balcony of a cafe in Ramallah and smokes shisha. “I smoke here at my own whim. Nobody disturbs me. I don’t think the girls in Gaza are allowed to smoke in public places as is the case here in the city,” she said.

According to local media reports, the Hamas-affiliated police in Gaza issued a decision “banning women from smoking shisha in cafes without the presence of a male companion, under the pretext of preserving public decency and adhering to customs and traditions.”

George Giacaman, philosophy professor at Birzeit University, said, "The city of Ramallah has its own privacy. It is different from all other West Bank towns, it has more room for ​​individual freedom than other cities."

“For the time being, the opinion of West Bank Palestinians vis-a-vis the Gaza Strip is mainly based on media reports, in light of lack of contact and communication between the two sides at both the general and the personal levels. This could sometimes lead to misconceptions regarding one side or the other,” he added.

In contrast, many Gaza Strip residents believe that Ramallah is rife with “moral corruption.” Ahmad Raba'ai, a shopkeeper, is one of them. He attributes the spread of corruption to “public parties, music concerts and alcoholic beverages, [which] are allowed in public places and cafes.”

Ahmed al-Rabahi said, “I read many press reports on the moral indecency in Ramallah, as girls and young men dance together at parties, and alcoholic beverages are served although they are forbidden in Islam. They have mixed universities and harassment is rampant there.”

According to Giacaman, the mutual negative perception the West Bank and the Gaza Strip have of each other is the result of “the disrupted communications between the people in addition to the great disharmony and disagreement between the movements of Hamas and Fatah, each governing an area. This is not to mention that local media are dragged behind political parties, which explains the sometimes exaggerated reports.”

“Before, the students of Gaza were allowed to study in the West Bank universities, which created a sort of individual communication and sometimes led to marriage between families. College students are the ones who will steer society in the future, and it is they who will form the coming elite in Palestine,” he added.

Al-Monitor also noticed a big difference in interests between Palestinians in the West Bank and those in the Gaza Strip. While most people in the West Bank are preoccupied with the rising prices, Israeli checkpoints between cities and how to obtain work permits, in the Gaza Strip Palestinians talk about more "sophisticated" matters, including the closure of the Rafah crossing, power outages, reconciliation and immigration.

For his part, Khalil Susi, a businessman from Gaza, told Al-Monitor, “Back then [in the 70s and 80s], we had full freedom of movement. I used to go almost everyday to the cities of Hebron and Nablus for trade. I even married a girl from Nablus, almost 40 years ago. Her father was a trader.”

Samir Aruri, a retired trader from Ramallah, said, “I used to visit Gaza regularly up until 1990. I remember its streets and sea. I used to have fish in its restaurants. Today, I know nothing about Gaza, except for what I hear on the news.”

Taysir Muheisen, the leftist writer in Gaza, said, “Inequality and imbalance between the West Bank and the Gaza Strip have become greater. In the West Bank, reform and development plans are being executed, institutions are being established, in addition to investments, economic conferences that are being organized and development programs that are being implemented. In the Gaza Strip, on the other hand, humanitarian programs and subsistence economy are being managed. This is not to mention the oil, tunnels and power crisis.”

In an article published by the Badil Research Center, Muheisen said, “[This inequity between the two regions] would generate two different social realities with the passing of time, deepening the rift in identity and awareness. This will also change according to agendas, issues and the mobilization patterns.”