Gaza Palestinians wish for electricity in 2014

For the year 2014, all Gaza Palestinians wish for better electricity, while some want a better economy and for Hamas and Fatah to unite. 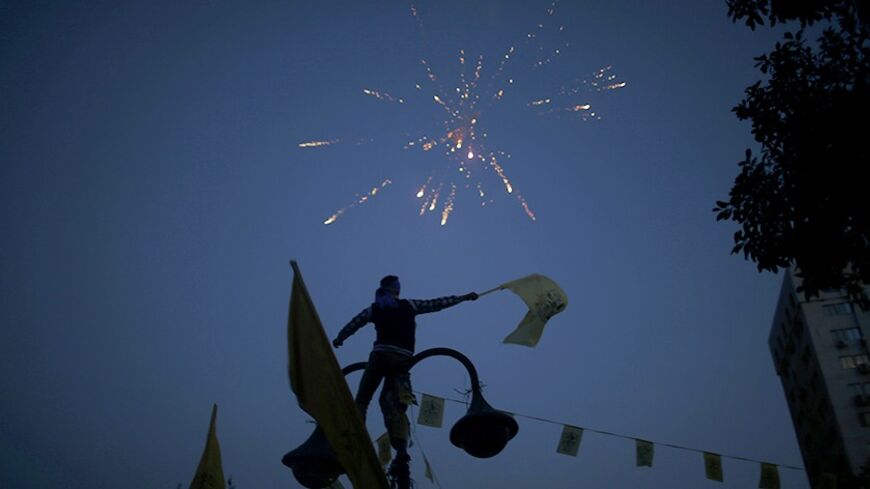 Fireworks are seen as a Palestinian waves a Fatah flag to celebrate the new year, Gaza City, Dec. 31, 2013. - REUTERS/Mohammed Salem

GAZA CITY — As Palestinians in the Gaza Strip start the new year, they have dreams about what they would like to see in 2014. What the Palestinians want is simple, but many believe that it will be hard to obtain. This is not because the goals are impossible, but because of the inability of Palestinian officials to achieve them.

All the Palestinians that Al-Monitor met at the start of the new year agreed that one of their primary wishes is to enjoy electricity at their homes and businesses without the repeated interruptions. They all wish for the electricity problem that has plagued the sector for more than seven years be solved.

Adel al-Zaim, 36, who works in a clothing store and has three sons, told Al-Monitor: “My only wish for this new year is to have electricity in my house for 24 hours, even if for just one day a month. The electricity [problem] is causing us psychological problems. My children have memorized the electricity rationing schedule.”

Gaza’s population of 1.8 million generally share Adel’s view about the electricity, whose situation worsens in winter and summer due to the increased demand for heating and cooling. Some areas get electricity for only eight hours a day.

Al-Monitor met Ibrahim Naaman, 42, as he stood in a long queue in front of a gas station to fill his taxi with Egyptian fuel, which is in short supply in Gaza after Egyptian authorities severely limited smuggling across the border. He complainingly said, “We’re not worthy of life. We ​​get the scraps of what the rich leave for us. I wish we could go back to the Stone Age, where we don’t need electricity, fuel or cars.”

The political rivalry between the two largest factions in Palestine — Fatah and Hamas — continues to worry their supporters in Gaza. A young man, who spoke to Al-Monitor under the pseudonym Mohammed because of his strong indignation toward Hamas and its government in Gaza, said, “I hope that sometime in 2014 Hamas leaves power and the Palestinian Authority, led by Fatah, returns to Gaza. Hamas has exhausted us after years of suffering and constraints.”

In contrast, Gaza resident Said al-Omri, 22, told Al-Monitor, “The fact that Hamas has remained in power in Gaza is a sign of weakness.” He hopes “the Islamist movement reaches power in the West Bank as well, as a prelude to liberating all Palestinian soil and removing the clique of corrupt leadership from power and halting the security coordination.”

Fadl Hilal, 47, lives in the al-Shaja’iyya neighborhood east of Gaza City and receives a salary from the Palestinian government in Ramallah despite his not going to work since Hamas took over the Gaza Strip in 2007. His highest hope for 2014 is for his salary to keep getting deposited in his bank account every month without interruption. He fears that the Palestinian Authority in the West Bank may stop paying salaries for its employees in the Gaza Strip as a result of European pressure.

Although he’s not sure whether that may happen, he told Al-Monitor: “I hope that in 2014 unity is achieved between Hamas and Fatah, and that a unity government gets formed in the West Bank and Gaza because I don’t wish to see the day when my salary is cut off. But if the two factions unite, [my salary] will not stop, because I will go back to work.”

Other hopes for the new year have to do with societal constraints, whether imposed by the Hamas government in Gaza or those that have accumulated as a result of the differing social beliefs. Al-Monitor met in a cafe a young couple, Riham and Rami, who are neither married nor engaged. The passersby on the street cannot see inside the cafe. The couple hoped that in the new year they would get to enjoy more freedom, without being continuously watched by the police or society.

University student Riham, 21, said, “I go out with my darling Rami almost once a week. But we take a lot of precautions so that no one sees us together. If a girl goes out with a guy with whom she has no legal relationship, her reputation may suffer. I hope that this changes.”

For his part, Rami, who is 22 and is about to graduate from university, wished to find a job after graduating, saying, “I will graduate from university in a few months. I will do my best to find a job in my field. But I think that favoritism will prevent me from finding a suitable job. Also, jobs are scarce as a result of the deteriorating economic situation in Gaza.”

Jamila al-Shaer, 56, is a housewife who was walking on Omar al-Mukhtar Street, the main market in Gaza City. For the new year, she told Al-Monitor she wishes success for her five children, saying, “I wish to marry off two of my daughters, as their elder sister did. For my two sons, I pray to God that one of them graduates with honors from university. For the other, who is 13 years old, I wish that he gets a better future that what we are living now.”

Palestinian national causes were among the wishes that Palestinians in Gaza expressed to Al-Monitor. Imad Bahr, 47, wished that in 2014 more Palestinian prisoners would get released from Israeli jails and that the Rafah crossing linking the Gaza Strip and Egypt would be opened permanently and without restrictions.

The married couple Saeed and Hiba Aql wished that in the new year they would get a chance to leave Gaza and travel to Europe to live there away from the everyday problems and the ongoing military confrontations with Israel.

Saeed told Al-Monitor he has been “trying for three years to get a visa to a European country. Now I got one, and I am awaiting a visa for my wife. We plan to travel to Europe, to my brother’s, who has been living there for 12 years. We have been married for three years and we don’t want to have children here. We will have a child after we travel.”

The new year’s dreams and aspirations of the Palestinians in Gaza were varied. They hoped that 2014 would be better than the previous year, without more bloodshed, bombings and destruction, and that the future be less harsh politically, economically and socially than in the past.