According to a recent World Bank report, restrictions put in place by Israel are having a devastating effect on the Palestinian economy, reports Lena Odgaard. 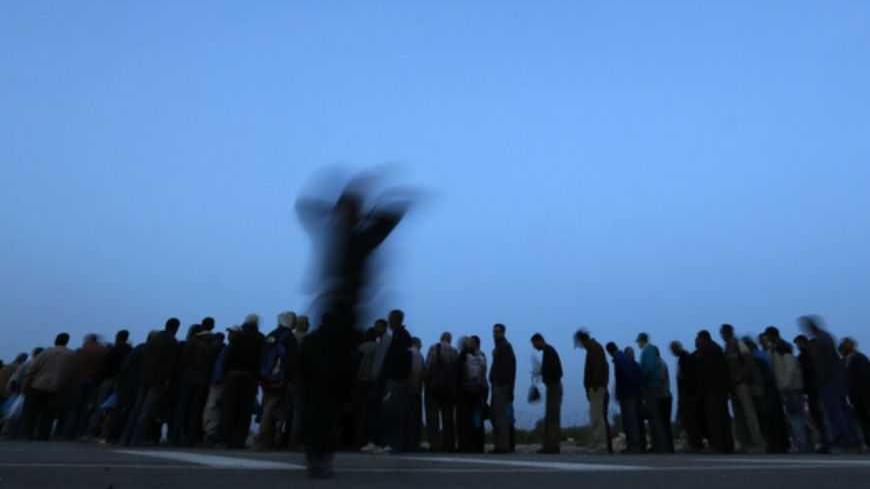 Palestinian laborers wait in line to cross into Israel at dawn at Hashmonaim checkpoint near the West Bank village of Nilin, west of Ramallah, March 14, 2013. - REUTERS/Darren Whiteside

A World Bank report released Tuesday, March 12 warns that the Palestinian economy is now suffering so much from the political stalemate and Israeli restrictions that it is losing its “long-term competitiveness.” This sends a signal to donors to Palestine that without political action, they are pouring their money down the drain, according to Palestinian businessman Sam Bahour.

Checkpoints and military searches, fees and hold-ups on goods going in or out through Israeli ports and restrictions in movement and access to basic necessities such as water and land are just some of the obstacles faced by the Palestinian private sector, leading to a downward-spiraling economy.

A statement issued by the World Bank noted that the “Israeli-imposed economic restrictions continue to constrain [Palestinian] sustainable economic growth,” which is “unlikely to change as long as political progress remains absent.” While this message is similar to that of the World Bank’s report from September 2012, the new report includes an analysis of the impact of the deteriorating fiscal situation and concludes that it is bound to cause long-term structural damage.

Bahour explained that this is the first time the World Bank has looked at long-term effects and boldly called on donor countries to put political action behind their money.

“The report is saying that as long as you are investing in status quo, you are allowing Israel to cause permanent structural damage to the Palestinian economy,” said Bahour. “That’s a message to third states to get off their asses and do something,” he added.

The report comes ahead of the Ad Hoc Liaison Committee (AHLC) meeting for donors to the Palestinian Authority in Brussels on March 19. And factoring into the timing of the report’s clear message could be recent weeks’ ongoing demonstrations and unrest in the West Bank as well as Arab uprisings in the past year, said Bahour. He guessed that the World Bank wishes to warn of the threat of social unrest if political inaction continues.

Impossible to set up a business

At Ramallah Café, a small coffee shop on Ramallah’s main street, Al-Monitor spoke to a group of men who were taking a midday break chatting and smoking shisha. When asked about the situation of the Palestinian economy, all noted that they had encountered hurdles due to the Israeli occupation.

“I can’t move my boxes to other cities because of checkpoints, and we can’t ship goods to other countries or see customers or get new contracts overseas. It’s too difficult,” said David, a sales manager for a company that sells printers.

Radi, an older Palestinian man, added, “Israel controls all imports and exports of Palestinian businesses. So if you try to bring something from outside, they try to put obstacles before you to serve Israeli businesses.”

Radi tried a few years back to start a business importing food, but was quickly discouraged.

“I tried to import biscuits from Turkey, but Israel kept the merchandise in the port for more than three months. As food has an expiration date, we were forced to resell the merchandise with a loss of more than 60%, so we didn’t try again,” said Radi, who now teaches at Al-Quds University.

According to the World Bank report, the manufacturing industry in particular has suffered. This is noticeable, for example, in the shoe industry in Hebron. This has led to a steady decline in the share of exports in the Palestinian economy from 10% in 1996 to 7% in 2011 — one of the lowest rates in the world. And while the agricultural sector has doubled in employment, the productivity level has almost halved. Bahour sees this as a sign of people turning to agriculture to sustain their livelihoods rather than to produce for export on an international level.

Past years’ "false growth" is leveling out

Al-Monitor spoke to Bahour in Ramallah on the terrace of a fancy Western-style restaurant surrounded by parked SUVs, Mercedes and Audis, situated in an area where public-ministry buildings are popping up everywhere, giving the impression of a thriving economy. But according to Bahour, this image is fake, a consequence of the large international presence due to the occupation. This means there is a need for restaurants, hotels and car-rental agencies, which stimulate the service sector in Ramallah. Meanwhile, what he called “the real Palestine” — such as Gaza, east Jerusalem and the Jordan Valley, all areas completely controlled by Israel — is suffering.

Throughout the past years, the Palestinian economy grew by about 15% from 2006 to 2011. However, according to Bahour, this was closely linked to Israeli restrictions on movement and access to water and electricity, forcing people to spend more.

“The World Bank took pride in the fact that growth caused the [Palestinian] prime minister’s office to raise the flag of economic growth, like it would take us out of the occupation,” said Bahour. “But as it is, the occupation is still very much alive.”

Additionally, the Gaza war of 2008-2009 led to a surge in the largely donor-funded rebuilding of Gaza. Meanwhile, in the West Bank, the PA’s strategy of building state-like institutions prior to the UN application for statehood led to an increase in construction.

As growth stagnates, Bahour sees this as a sign that people are adjusting to the restrictions of the occupation and a reflection of an economy built on survival, with little prospects for change. Moreover, with an alarmingly high level of youth unemployment — in which more than a quarter of 15 to 29-year-olds in the West Bank and close to half in Gaza are without a job — there is a dire prospect of losing an entire generation of the work force.

Lena Odgaard is a Danish journalist reporting from around the Middle East, mainly on Israel and Palestine. She tweets @l_odgaard