In an exclusive Al-Monitor interview by Lena Odgaard, Ramadan Shallah, the head of Palestinian Islamic Jihad, discusses Israel's Gaza operation and his own relationship with Iran. 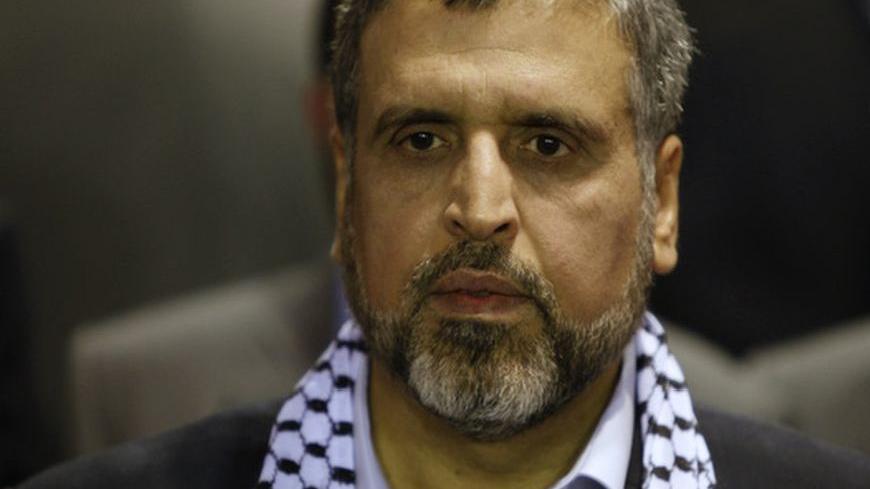 Ramadan Shallah, head of the militant Islamic Jihad group, attends a rally to mark the 23nd anniversary of the foundation his group held at a Palestinian refugee camp near Damascus November 5, 2010. - REUTERS/Khaled Al Hariri
November 30, 2012

Cairo — Resistance, not politics, remains the main road to achieve Palestinian independence and rights, said the head of the Palestinian Islamic Jihad, Ramadan Shallah, in an exclusive interview to Al-Monitor. Though stating that he would respect the recent cease-fire deal with Israel, he predicted another intifada, or uprising, in response to the deadlocked peace talks.

“In Palestinian history, resistance was always a source of inspiration for our people to continue the struggle in order to get back our rights and homeland, Palestine,” Ramadan Shallah said in his suite at an elegant, five-star hotel in Cairo.

Though the final details of the Israel-Gaza cease-fire, including in particular the issue of border crossings, are still being discussed through Egyptian mediators, both parties have claimed victory. While Netanyahu said Hamas and other militant groups suffered a severe military blow, Hamas and Islamic Jihad, the main political Gazaan factions, celebrated the cease-fire agreement, pointing to achievements such as stopping Israeli incursions and the so-called “targeted killings” of hardline militants. According to Shallah, his party — known for its radical-militant tactics and hence labelled a terrorist organization by most Western countries — will respect the new cease-fire but not rule out another round of fighting.

“There is no guarantee to keep our enemy away from Gaza except having strong capabilities that can deter it,” Shallah said.

Inspiration to the West Bank

The timing of the latest exchange of rockets and missiles between Israel and Gaza, which started only weeks before president Mahmoud Abbas’ Nov. 29 UN bid, highlighted the difference in strategy between Hamas and the Palestinian Authority on the West Bank to achieve Palestinian independence. Rejecting the almost 10-year-old Palestinian-Israeli peace agreement, the Oslo accords, Shallah said he saw the political strategy of Abbas as having failed.

“We should seek another strategy that cannot exclude resistance,” he said. “We [the Islamic Jihad] can consider politics, but not the politics Mahmoud Abbas has been involved in since the signing of the Oslo agreement. It is a kind of surrender from our point of view,” he said.

Shallah explained that although Abbas and the Fatah movement, which Abbas represents, for years have been willing to work for a peace agreement with Israel, Israel has refused to commit to any compromises.

“For 40 years, the Palestinian Liberation Organization and the Palestinian Authority have extended their hands and offered proposal after proposal, but every time Israel is responding negatively and they are not giving us anything.”

And with peace negotiations seemingly at a long-lasting stalemate, Shallah said that opting for armed resistance was likely to serve as inspiration to Palestinians on the West Bank, especially as the situation there is becoming untenable.

“[In the West Bank,] we have a desperate situation and the failure of the so-called peace process. We reached a deadlock and this eventually, sooner or later, will bring another intifada,” said Shallah, who doesn’t see the two-state solution as possible due to the ongoing expansion of Jewish settlements on Palestinian land.

Shallah praised the major backing Gaza armed groups received from Iran in the last round of fighting with Israel and Gaza. He said that the Iranian leadership supplied both money and weapons, enabling militants to strike targets as far away as Tel Aviv and Jerusalem.

Shallah, who is himself on the FBI's list of most-wanted terrorists, emphasized his close relationship with Iran President Mahmoud Ahmadinejad, who he said had called him personally to congratulate him on the “successful offensive.”

“Iran has been providing us with the support we needed to defend ourselves in the face of the Zionist occupation. Iran supported us militarily and financially and with all we need to remain steadfast on our land,” he said, adding, “We hope that all the Arab countries do the same.”

At a press conference last week, Shallah and Hamas leader in exile Khaled Meshaal made it clear that they would continue to stockpile weapons to deter Israel from attacking Gaza again. And it is indeed likely that Iran will continue using Gaza as a proxy for a war with Israel. On the other hand, Israel has now felt the consequences of the Gazan factions’ powerful ally and is likely to do whatever it takes to stop it. As Hamas and Israel debate the free movement of people in and outside the Gaza Strip via Egypt’s shared border, the issue of the free flow of arms will likely reach the negotiating table as well. And how Islamic Jihad will react to any demands for concessions remains unknown so far.