Continual protests by Palestinians over the cost of living are more than about economic matters, Lena Odgaard writes for Al-Monitor. She reports that both people who are polled and pundits see the demonstrations as evidence of a struggle for leadership in the Palestinian Authority. 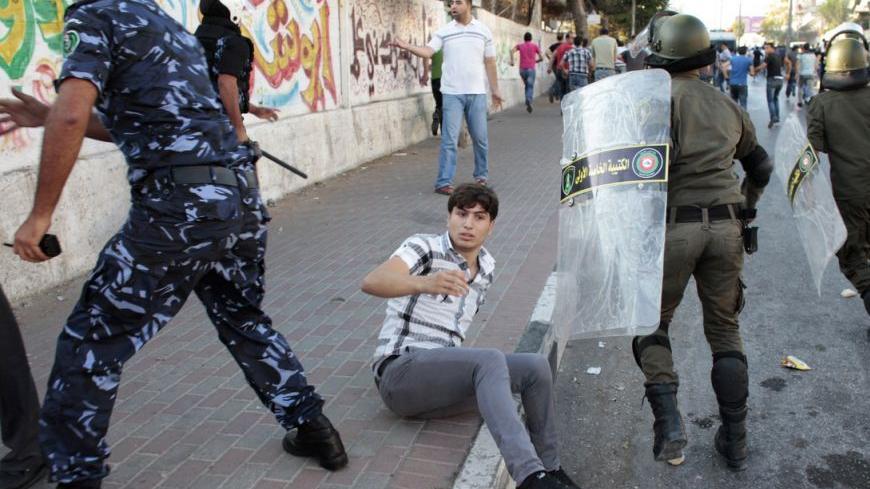 Palestinian security forces disperse crowds outside a police station during clashes at a demonstration against high living costs and the government in the West Bank city of Hebron, Sept. 10, 2012. - REUTERS/Darren Whiteside
September 23, 2012

RAMALLAH – A World Bank report released Wednesday urged international donors to react quickly to a deep fiscal crisis in the Palestinian territories. The Palestinian Authorities have been under significant pressure this month due to a sudden eruption of continuous protests as thousands took to the streets in a cry of despair over increasing living expenses. This led to Palestinian President Mahmoud Abbas calling it the beginning of a "Palestinian Spring." But according to critics, motives ran deeper than just prices on fuel and bread revealing an internal political power struggle within a Palestinian government pressured by an ever clearer recognition that it is not getting closer to statehood.

Protesters in the streets called for the end of Prime Minister Salam Fayyad and not the Israeli occupation, making the protests unprecedented. This distinct targeting of Fayyad made Sam Bahour, a US-born Palestinian businessman, with whom Al-Monitor met in Ramallah, question the participants and motives behind the protests.

“I don’t believe it was just about the economy,” said Bahour. "The economy was used as a face for a very political move. I believe that what we are seeing is an internal struggle for leadership in the Palestinian Authority.“

A public opinion poll by the Palestinian Center for Policy and Survey Research shows that 44% of the Palestinians believe that the financial crisis is manufactured. The same poll shows a decrease in the satisfaction with the Fayyad government, President Abbas and the Fatah party in general. Still, 66% say the "price hikes and the inability to provide for a better life force them to take part in the protests."

Palestinian journalist, Mohammed Jaradat, with whom Al-Monitor talked in Ramallah, strongly believes that the initial protests were to some extent staged or supported by people in the Fatah party who want Fayyad out. He argues that the lack of women in the early protests is uncommon in demonstrations in the West Bank. He also finds it peculiar that Abbas left for diplomatic meetings with India at a time when Palestinian streets were literally burning. And not least was he surprised to see the relatively high level of restraint shown by the Palestinian police in contrast to previous demonstrations where he was himself beaten up at a protest as recently as July.

“It started as a Fatah versus Fayyad thing but has grown into something more,” said Jaradat, explaining that as the protests grew they were taken over by trade unions and the youth movement. This changed the focus targeting also Abbas and the Palestinian Authority in general — especially for not canceling the Paris Protocol, the part of the 1993 Oslo Agreement that regulates the Israeli-Palestinian economic relations. The protocol grants Israel mandate to collect trade and customs revenues on behalf of the PA, which has continuously criticized Israel for not releasing these revenues as punishment for Palestinian political measures.

Though the World Bank report stressed the PA’s financial crisis, Bahour sees the West Bank protests more as a sign of internal political tension growing as a consequence of political stalemate in the relationship with both Israel and Gaza: “There is a recognition that the reconciliation with Hamas has become a dead issue. That is a major realization and if it is true we are talking about a West Bank orientation of the leadership,” said Bahour. “Secondly, the political program of Fayyad is failing.”

Bahour explains that Fayyad, a former economist at the International Monetary Fund, has been praised by international (especially American) donors for his strategy of building institutions required for statehood, but “neither did he build the institutions required, nor did we reach statehood,” said Bahour stating that this puts the Palestinian leadership under significant pressure.

In an e-mail to Al-Monitor from the World Bank, it does not comment on protesters criticism of the PA or calls for the cancellation of the Paris Protocol, but confirms its confidence in the Palestinian Authority: “The World Bank maintains its positive assessment of the PA's institution building agenda. This institutional capacity is an important part of the confidence placed in the PA and its ability to effectively use public resources.”

To accommodate some of the protesters’ demands the PA announced slight reductions in taxes and paid civil servants at least some of their salaries, which had been withheld. But most noticeably was a formal request asking Israel to review the Paris Protocol and on Wednesday reports of the canceling of the Oslo Accords from the Palestinian top negotiator, Saeb Erekat.

Though this is not the first time this threat has been made, the Oslo and Paris agreements are, according to Bahour, a core issue because of its limitations on Palestinian economic growth.

“The Paris Protocol was lopsided in its structure to make sure we could not develop,” he said. “If we have lost confidence in the Oslo Accords, which I would claim we have, then the Paris protocol becomes a sideshow and the real question is how do we restructure the relationship with our occupier.”