Mahmoud Abbas has been praised by the international community for maintaining order in the West Bank. But for Palestinians there, he has neither been able to stop Israeli settlements nor bring Palestinians closer to independence, writes Lena Odgaard. 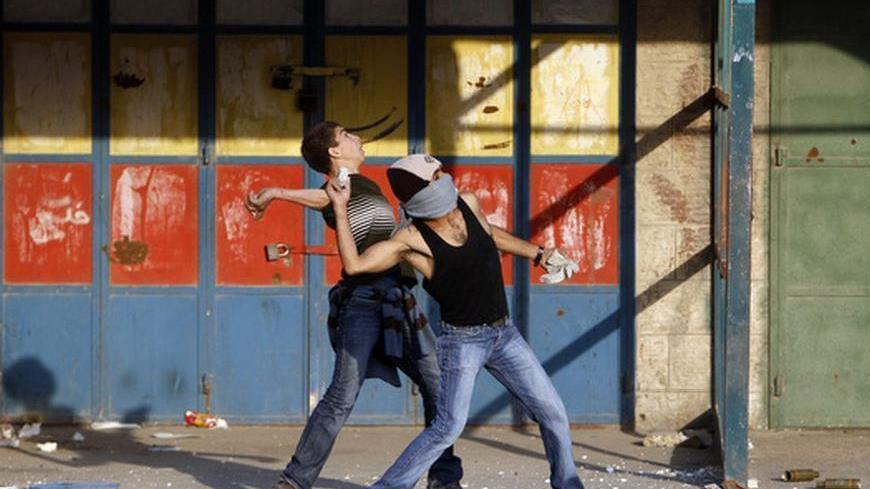 RAMALLAH — "GAZA, GAZA, GAZA" rung chants of a demonstration in Ramallah Saturday afternoon: "Out with Israel — Freedom for Palestine."

About 300 Palestinians marched through the streets of Ramallah to show sympathy for their fellow country men in Gaza. Since then sizes of demonstrations have grown with eye witnesses reporting of 500 in Ramallah Monday after all government employees went on strike in solidarity with Gaza. Demonstrations have been carried out throughout the West Bank in both cities and at checkpoints, where Israeli soldiers responded by shooting not only tear gas and rubber coated bullets but also used live ammunition, killing two young men.

The demonstrations and violent clashes signal sympathy with the more than 100 Palestinian victims of the Israeli airstrikes on Gaza, but more so support of Hamas’ armed resistance of the Israeli occupation. For the past seven years President Mahmoud Abbas has been praised by the Western international community for his ability to maintain order in the West Bank, but for the Palestinians there he has neither been able to stop Israeli settlements nor bring Palestinians closer to independence. For many, Hamas' ability to target areas close to both Tel Aviv and Jerusalem with their rockets ignited renewed hope that the party can chase Israel out of the Palestinian territories.

"It's not about killing Israelis or the number of casualties. It's about a dream of resisting," Palestinian journalist Mohammed Jaradat explained to Al-Monitor in Ramallah, emphasizing that he sees himself as politically independent and not a supporter of Hamas, "But Hamas proves that they can change the situation on the ground."

The current situation between Israel and Gaza puts Abbas in a difficult position. With only little over a week till Abbas’ application for Palestinian UN membership status upgrade, the bloodshed in Gaza only adds to the skepticism of his UN strategy among the Palestinian people. Adding to this, Jaradat explained, is disappointment with Abbas’ reluctance to comment on the situation in Gaza and refraining from directly supporting the Hamas-led government’s military actions.

While the spokeswoman of the Palestinian Authority, Nour Odeh, would not comment on the president's plans to visit Gaza when Al-Monitor spoke with her Saturday, Egypt's Prime Minister Hisham Qandil, and Tunisia's Foreign Minister Rafik Abdesslem, both conducted official visits to Gaza in the past week. Additionally, the Arab League consisting of 22 Arab countries has declared that they will send a delegation to Gaza Tuesday. These diplomatic gestures signal not only solidarity with Gaza but more so as legitimacy for Hamas and Haniyeh as a de facto leadership.

Speaking to Al-Monitor in Ramallah, Husam Zomlot, of the Fateh Commission for International Relations and spokesman on the UN bid, Abbas and the Palestinian leadership are aware that this is an acute moment for them.

“It leaves us in a very bad situation. We are not part in what is happening in Gaza. It’s a war between two parties and we are unable to be players. But this will change with the bid at the United Nations,” he said maintaining that he sees this as the only viable strategy towards a Palestinian state.

Sam Bahour, an American-Palestinian businessman whom Al-Monitor met in Ramallah, agrees with the importance of the UN approach: “The political move is the topic — as hard as it is to say that when there are bombs dropping, and people are dying,” he said, explaining: “Palestinians, for the first time in history, are taking a step out of line with US desires and challenging the US monopoly on the peace process through the UN bid for statehood.”

Still, he believes that Abbas is underestimating the importance of the mood on the street where people are questioning why foreign officials have gone to Gaza when their president hasn’t.

“From a political calculation he should already be there. He should use the crisis to make the overturn and entrench the political division,” Bahour said guessing that Abbas feels that if he goes he needs to offer political unification. But as the head of the Gazan Hamas-led government, Ismail Haniyeh, is currently seeing unprecedented support internally and regionally, Abbas would be the weaker part.

According to Bahour, the UN bid is not only Abbas’ last attempt to maintain power but also the final test of the idea of a two-state solution.

“We are seeing an end of a 45-year paradigm of a two-state solution as a way of ending the conflict. This is much more dangerous than the end of a leadership,” said Bahour, who's anticipating a shift in power from Fatah to Hams.

Also, Jaradat has little doubt that the era of Abbas is coming to an end: "This could be the last days of Abbas and the PA — every day Hamas stays strong the PA grows weaker."