Even as Palestinians commemorate the 39th Nakba Day, Israel is still expanding its settlements in a bid to undermine the two-state solution. 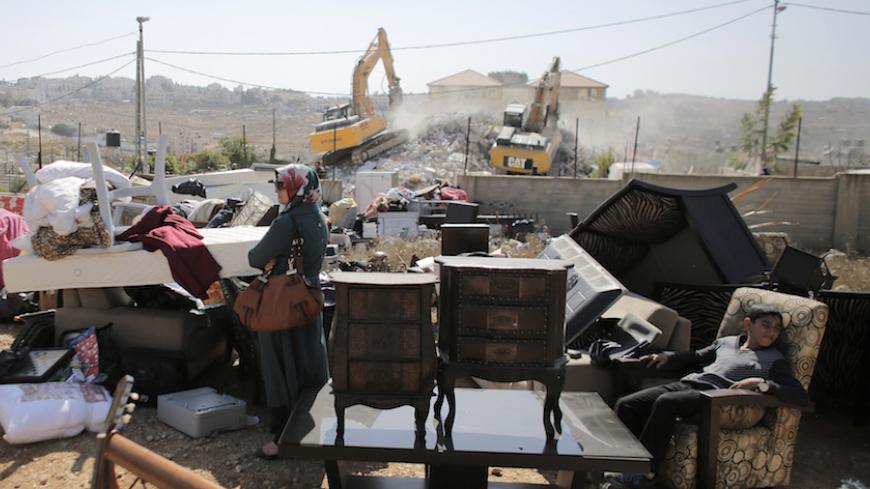 A Palestinian woman stands near furniture removed from her house as it is being demolished in the East Jerusalem neighborhood of Beit Hanina, Oct. 29, 2013. - REUTERS/Ammar Awad

RAMALLAH, West Bank — Palestinians marked the 39th anniversary of Nakba Day on March 31, staging various events in the West Bank, the Gaza Strip and the 1948 territory.

Palestinians have been consistently commemorating Nakba since March 30, 1976, when six Palestinians were killed inside the Green Line following marches in the Galilee, the Triangle and the Negev in response to Israel's decision to confiscate 21 acres of the villages of Araba, Sakhnin, Deir Hanna and Arab as-Sawaed.

The observance of Nakba Day opened a new chapter in the Palestinian struggle inside the Green Line, being the first of its kind since the occupation of Palestine in 1948. The commemoration reminds Palestinians of their cause every year: the land that Israel continues to loot, undermining the Palestinians’ effort to establish a state of their own. It also prompts them to evaluate what is left to them.

According to a report issued by the Palestinian Central Bureau of Statistics on the occasion of Nakba Day, “Israel seized 85% of the historic Palestine land, which stretches along ​​27,000 square kilometers [17,000 square miles], while Palestinians only benefit from about 15% of that space.”

Statistics from the Colonization and Wall Resistance Commission put the number of settlements, small outposts, military bases, touristic sites, service and industrial buildings and houses either completely or partially seized by the settlers at 505 until last year in the West Bank. By 2013, the number of settlers reached nearly 600,000, 48.5% of them living in Jerusalem.

Khalil Tufkaji, the director of the Department of Mapping and Surveying in the Orient House in Jerusalem, told Al-Monitor, “The Palestinians in the 1948 territory only own 6% of the land and 40% of the West Bank, while they used to own 100%." In Jerusalem, they only own 13% of the area they had in 1967, he said.

“Israel is proceeding with its plans to prevent the establishment of a Palestinian state and only provide Palestinians with centers that are surrounded by settlements from all sides. Along with the Jerusalem 2020 project, Israel is following a project it developed in 1979 with the aim of spreading a million settlers in the West Bank and Jerusalem,” he added.

West Bank expert on settlement affairs and border issues Abdul Hadi Hantash told Al-Monitor that Israel’s settlement plans aim to “limit the Palestinians’ share of the West Bank to 22% in a bid to prevent them from establishing a geographically contiguous Palestinian state with Jerusalem as its capital.”

Hantash added that Israel has divided the West Bank into 15 parts, including six large settlement blocs and an area that includes settlements, along with isolated and random spots and eight separate Palestinian cantons.

On April 1, Palestine officially became a member of the International Criminal Court (ICC) during a closed meeting held at the ICC headquarters in The Hague. Government spokesman Ihab Bseiso said in an April 2 press statement, “The government will seek to let the ICC prioritize the settlement file following Palestine’s official accession to it.”

The PLO Executive Committee issued a Jan. 21 decision to form a supreme national committee to oversee priority issues with the ICC and pay special attention to the various settlement and aggression issues in the Gaza Strip.

Wasel Abu Youssef, a member of the Palestine National Council and of the PLO Executive Committee, told Al-Monitor that the committee, which includes the Palestinian president, held several meetings and decided to raise the two issues of the settlement and the war on Gaza at the ICC. Abu Youssef said that work on these two files is in full swing, and the council will decide on the submission date as soon as it is ready.

The head of the Colonization and Wall Resistance Commission, Walid Assaf, pointed out in an interview with Al-Monitor that Israel is seeking to head off the two-state solution and control the Palestinian territory in favor of expanding the settlements and the Israeli West Bank barrier, which devastated about 75,000 acres on the western side of the West Bank and swallowed another 750,000 acres, an area twice the size of the existing settlements. Also, the eastern wall controlled over 28% of the West Bank land adjacent to the Jordan River, the Dead Sea and mountain highlands, which have been declared military zones. All this combined hinders the establishment of a Palestinian state, said Assaf.

Asked about the Palestinian action to confront Israel and preserve the rest of the land, Assaf said that when forced to respond, Israel will either withdraw or demolish the settlements.

Asked what could force Israel to make such a move, Assaf pointed out that at the domestic level, the “Palestinian demographic superiority over the Palestinian land will do so, in addition to international political action, including the ICC and the wider activation of the popular resistance.”

As the settlement file is being prepared for submission to the ICC, international condemnation of the settlements as well as the Palestinian diplomatic efforts have failed to stop the bulldozers that continue to swallow the land, day and night, at the expense of the two-state solution, which is gasping for breath before the international community.