Will PA focus on settlements at ICC?

Now that the Palestinian Authority is an official member of the International Criminal Court, the safer course for the Palestinian leadership will be to pursue Israel's settlements and not its transgressions in Gaza. 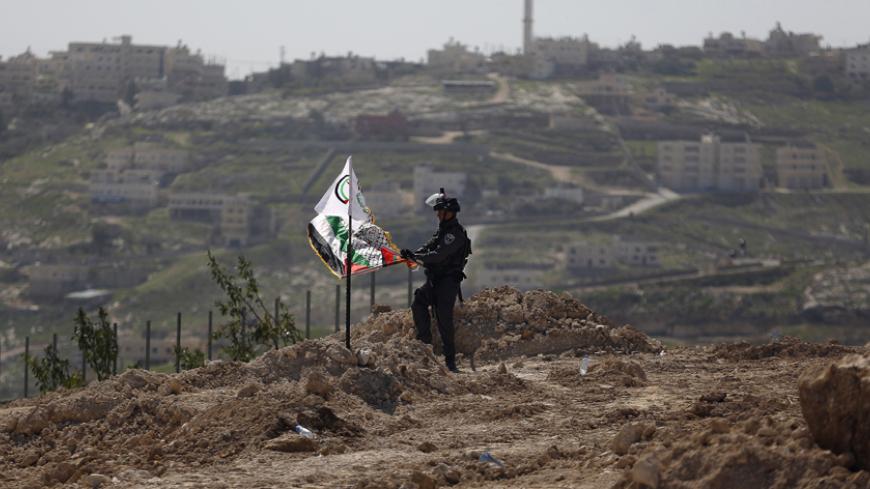 An Israeli border policeman removes a Palestinian flag and a Fatah flag during a protest against what Palestinians say is land confiscation by Israel for Jewish settlements, near the West Bank town of Abu Dis near Jerusalem, March 6, 2015. - REUTERS/Mohamad Torokman

No one is saying it out loud, but it appears that the Palestinian leadership is choosing to pursue the settlement track rather than the Gaza track in the war crimes efforts against Israel. Palestinians have publicly talked about pursuing in the International Criminal Court (ICC) war crime cases against Israel for the deaths and destruction in Gaza during last summer’s war and for the ongoing illegal settlement activities in the occupied territories.

Palestine became an official member of the ICC on April 1. And while Palestinian spokespersons are talking about both tracks, they are sending signals that they will not push hard when it comes to Gaza issues.

It appears that the ICC’s prosecutor had already begun examining the Gaza war for possible war crimes back in January, but it appears that this case will take a long time. "There's no time line, some of the preliminary examinations at the court have been going on for four years," Richard Dickers, the director of Human Rights Watch's International Justice Program, told Vice News. "What's underway is only the first phase of the judicial process."

The ICC is considered a court of last resort. Its official website states that it “will not act if a case is investigated or prosecuted by a national judicial system unless the national proceedings are not genuine.”

On the possible delay, Palestinian Foreign Minister Riyad al-Malki was quoted by Reuters as saying that if the investigation takes longer than expected, “we are ready to issue a referral.”

Israel routinely initiates investigations in all cases that include fatalities. And while Amnesty International has questioned the seriousness of investigations of the Israeli army’s killings of Palestinians, the very existence of such investigations do weaken any war crimes case.

On the other hand, once an investigation into war crimes begins, there are no restrictions on who will be investigated, and the possible Gaza investigation includes a number of pitfalls for Palestinians. While Palestinians under occupation are allowed by international law to defend themselves from attacks by their occupiers, it is likely that some Palestinian individuals (and not the PA) might be accused of war crimes themselves.

To head off the latter, Palestine Liberation Organization executive committee member and head of the Palestinian team in charge of pursuing the war crimes dossier Saeb Erekat told Al Arabiya TV on April 1 that Palestinian laws are being changed to conform to the obligations of joining the ICC. He also revealed that a “legal committee was established to study the need for an investigation into possible Palestinian war crimes,” possibly mitigating the danger of any Palestinians from Gaza being investigated for war crimes.

On the other hand, the case against Israeli settlement activities, land confiscation and the movement of persons from the occupying country to the occupied areas form a much easier case to win.

The Fourth Geneva Convention makes very clear that settlements and those directing and protecting the settlers are committing a violation of international humanitarian law — which makes the settlement track stronger for Palestinians, since it is a crime that is still continuing, and no denial of its existence is possible.

The Israeli government, through its military leadership, is responsible for the settlements enterprise, which constitutes a war crime. Furthermore, the 2004 advisory decision by the International Court of Justice referred clearly to the fact that settlements in the occupied territories run contrary to international law.

When pursuing Israel for its settlement activities, the Palestinian team must decide which individual or individuals are to be charged with war crimes. Will they go after the military or political leadership, or both? The most likely candidates will be the Israeli commander of the Central District, the coordinator of activities of the Israel Defense Forces, the head of the civil administration and the minister of defense. It is also possible that the Israeli prime minister will be charged as well.

Naturally, the Israelis will base their legal defense on the claim that the Geneva Conventions do not apply to the occupied territories, which they deem "disputed" areas.

Israel has traditionally argued that the West Bank is not Palestinian territory because it was captured from Jordan and that Jordan’s annexation of the West Bank had not been recognized by most countries of the world.

Israel, whose unilateral annexation of East Jerusalem has not been recognized by any country, says that Jordan’s act was not legal because only Britain and Pakistan had recognized its 1950 annexation of the West Bank areas.

For Palestinians, the case against Israel should aim to prevent the perpetuation of war crimes and not pursue revenge for past crimes. Joining the ICC provides Palestinians with both privileges and responsibilities. It would be foolish and counterproductive, after embarking on this important strategy, for Palestinians to resume engaging in disruptive politics and use excuses to delay proceeding with the case against Israelis who have committed war crimes.

If the settlement track is to be pursued, all legal and administrative resources must be focused on presenting the most comprehensive and effective case possible. Success at the ICC is likely to not only hold Israel responsible and accountable for its actions, but immediately produce the kind of deterrence that has been missing in the Palestinian arsenal of nonviolent weapons.