The manslaughter conviction of an Israeli soldier for killing a wounded Palestinian youth has fended off an investigation of that particular crime by the International Criminal Court, but it does not mean Israel is in the clear on allegations of war crimes for other deaths. 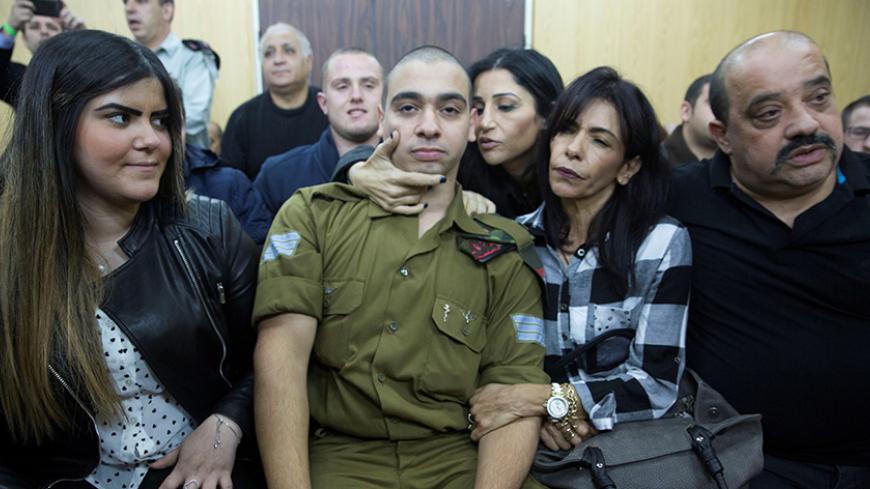 The documented case of the Israeli soldier shooting and killing an injured Palestinian youth in March 2016 in Hebron could have provided the perfect case for the International Criminal Court (ICC) to launch a war crimes investigation. The Hague-based ICC is authorized to look into violations of international humanitarian law in areas under its mandate. The Palestinian occupied territories became part of its jurisdiction on April 1, 2015, after Palestine was accepted as a full member of the court.

The ICC doesn’t indict governments or organizations, but goes after individual war criminals if there is a strong case for indictment. The evidence was damning in the case of Elor Azaria shooting Abdel Fattah al-Sharif. A video taken by a human rights activist clearly shows that the Israeli soldier killed an injured person lying on the ground incapacitated. It was not the first time that an Israeli soldier had shot a Palestinian in violation of international law, or even in violation of his own military's rules of engagement, which specify that soldiers are not allowed to open fire unless their lives are in danger.

Amnesty International (AI) has shone a light on this issue, documenting that Israeli soldiers often carry out “unlawful” killings that amount to war crimes. In September 2016, AI sent a memo to the Israeli government noting that in at least 15 cases documented between September 2015 and September 2016, “Palestinians were deliberately shot dead, despite posing no imminent threat to life, in what appear to be extrajudicial executions.” Earlier, in a 2014 report, “Trigger-happy: Israel’s Use of Excessive Force in the West Bank,” AI documented 19 cases that “amounted to possible unlawful killings, including three cases where there was evidence of willful killings, which amount to war crimes.”

When the Israeli army prosecutor decided to charge Azaria with manslaughter, the military was aware that ICC prosecutors were considering investigating the case. Even before the Azaria case, the Jerusalem Post had reported that the ICC was looking into hundreds of incidents of possible war crimes committed during the 2014 Gaza war. The Palestinian government and human rights organizations have supplied the ICC with information documenting alleged war crimes committed during that conflict. The ICC has yet to indicate what it plans to do with the information.

Anis Fawzi Qasim, a leading Palestinian expert on international law, told Al-Monitor that the ICC will not investigate the Azaria case. “International law is very clear in that local procedures must be exhausted before holding violators responsible,” he explained.

Qasim, also editor of the Palestinian Year Book on International Law, said that an ICC investigation of Azaria would violate his rights. “A person can’t be tried by two different bodies,” he said. “This is considered double jeopardy, and therefore it is impossible to try him again.”

The Rome Statute is clear, Qasim said, adding, “The rule against double jeopardy has long been considered an important protection for accused persons and an essential element of the right to a fair trial.” Qasim said the ICC only intervenes where it is convinced that a local government has not conducted a proper investigation and trial. According to the court's protocols, “The ICC does not replace national criminal justice systems; rather it complements them. It can investigate and, where warranted, prosecute and try individuals only if the state concerned does not, cannot or is unwilling genuinely to do so.”

The Palestinian Maan News Agency reported Jan. 4 that Sharif's family is not satisfied with Azaria's conviction and plans to pursue the case with the ICC. A spokesperson for the family expressed outrage that the “murderer” of their son was convicted only of manslaughter, saying they would “expose the military court as a farce, just like other cases of criminal acts carried out by Israeli forces and settlers against our people.” The family wanted Azaria to be tried for murder, according to Maan.

Human Rights Watch reported that the problem of unjustified killings is much bigger than one individual soldier and is related to a political environment that encourages such acts. “It’s not just about potentially rogue soldiers, but also about senior Israeli officials who publicly tell security forces to unlawfully shoot to kill,” the organization charged in a Jan. 2 report documenting the many cases of Israeli officials supporting extrajudicial killings of Palestinians.

It is unclear whether talk of a possible Israeli pardon of the convicted soldier will weaken the Israeli war crimes case. Prime Minister Benjamin Netanyahu has publicly supported a presidential pardon for Azaria.

Qasim does not believe a pardon would lead the ICC to investigate in this particular case. “A pardon is a political, and not a legal decision,” he explained. “It might be taken because a president finds that such a decision is important for political considerations.” Palestinian members of the Israeli Knesset have expressed opposition to a possible pardon, saying it would amount to granting a “license to kill.”

The conviction of Azaria for what would be a clearly documented war crime has helped Israel avoid a possible ICC investigation into the matter, but it is too early to determine whether the conviction represents a change in attitude in Israel toward trigger-happy soldiers. The case will increase Palestinian, Israeli and international efforts in documenting such abuses and ensuring that sufficient proof is available to convict in such instances, but a much bigger question remains: What is the role of senior Israeli military officials and politicians in the perpetuation of the occupation, the main cause of almost daily violations of international humanitarian law? Legal and political efforts must not be restricted to individual acts, but extended to the decadeslong problem of occupation and settlement, which are causing the daily confrontations.