In an attempt to raise the payrolls of employees appointed by the previous Hamas government, new taxes have been levied on goods and services in Gaza, angering importers and consumers. 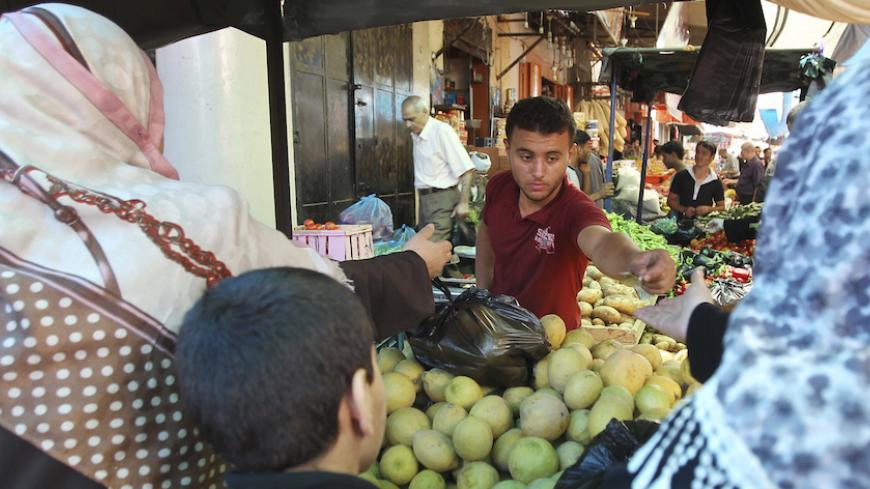 GAZA CITY, Gaza Strip — The Hamas authorities in Gaza have imposed additional taxes on imported goods, services and public shareholding companies for the purpose of meeting the payrolls of employees appointed by the previous Hamas government, leading to a wave of widespread criticism among the populace.

Members of Hamas’ Legislative Council approved the new levies by adopting a “national solidarity” tax that went into effect at the start of April and extends until the end of the year.

The law, of which Al-Monitor obtained a leaked copy signed by the president of the Palestinian Authority (PA), imposed a tax not exceeding 10% on the value of goods and merchandise imported into the Gaza Strip, as well as on services and public shareholding companies with profits not exceeding $1 million per year. A 100% tax was levied on tobacco and its derivatives. Hamas’ Change and Reform Bloc in the Legislative Council justified the law as necessary to “overcome the siege and address the problems of citizens.”

The bloc issued a statement indicating that a comprehensive law was passed to overcome the current impasse created by the reconciliation government and the siege, for which the provincial authority in Ramallah bears some responsibility. The statement read: “The plan was symbiotic and temporary, adopted to serve the needs of all citizens, particularly the poor, the unemployed, workers and employees, as well as to boost economic activity in the Strip. Citizens will appreciate its importance and its aim to better their interests, overcome the siege, satisfy the needs of the poor and subsidize the thousands of people who are poor and unemployed.”

The new fees and taxes caused widespread discontent among merchants, leading some to temporarily stop importing goods beginning April 12 and lasting until the financial issues are resolved.

There has been widespread debate in the Gaza public concerning the rise in prices and the statements made by Jamal Nassar, the chairman of the Legislative Council’s Budget Committee, during a meeting with Gaza businessmen and importers, in which he said that citizens, not merchants, would bear the brunt of this tax.

In the recorded meeting, Nassar addressed the merchants, saying, “You are not the targets of these fees. Why, then, are you waging such a rabid war against them? None of you will be affected, for citizens will bear the brunt. I am dumbfounded; you speak as if your interests will be damaged. No, no; citizens are the ones who will suffer.”

The tax measures adopted by executive and legislative bodies in Gaza reflect a total absence of Prime Minister Rami Hamdallah’s unity government in the management of Gaza’s domestic economy, as a result of the ongoing crisis between Hamas and the PA. Theoretically, Palestinians have a unity government, but Hamas is actually ruling Gaza and the new decisions show how weak and absent the unity government is.

An official source at the Gaza Ministry of Economy told Al-Monitor on condition of anonymity, “The new fees and taxes were proposed by the ministry and approved by the deputy ministers appointed by the Hamas government in Gaza, prior to being referred to the Legislative Council for legal drafting and adoption.”

The Ministry of Economy refuses to publish a list of the new taxes and fees on imported goods and services. Instead, each merchant is individually informed of any dues that are owed. The same source justified this tactic by saying, “There is fear that if the list is published in the media, it may lead to a negative backlash.”

The crisis faced by the Hamas government was exacerbated after the fall of the Muslim Brotherhood regime in Egypt and the cessation of the smuggling of goods through tunnels between the Gaza Strip and the Sinai Peninsula. These goods were subject to fees and taxes that covered most of the expenditures of the Gaza government.

An anonymous source in the Gaza government told Al-Monitor, “The new taxes will bring in at least $3 million per month, in addition to the $7-10 million previously collected; which might cover part of the estimated $28 million per month in total salaries.”

The estimated 40,000 employees appointed by Hamas after Gaza’s split from the Palestinian territories have not been paid by the unity government formed at the beginning of June 2014, subsequent to the reconciliation between Hamas and Fatah.

Those employees sporadically organize partial and total strikes in attempts to pressure Hamdallah’s government into officially merging them with state employees and pay their salaries.

An eight-member West Bank ministerial delegation visited the Gaza Strip April 19 on a scheduled one-week stay. But differences with Hamas over the minutiae of handling the employee dossier led them to cut their visit short on April 20.

Palestinian nongovernmental organizations asked the ministries and the Legislative Council to repeal the National Solidarity Tax and refrain from passing laws adopted by Hamas’ Change and Reform Bloc in the name of the council.

Their statement read, “The National Solidarity Tax law lacks proper justification. In fact, its implementation shall be greatly injurious to all segments of society, especially the poor, for it shall negatively impact their recognized rights under the Palestinian Basic Law, as well as their rights under international conventions and treaties. Taxes have been imposed on many essential commodities, and this exacerbates the burden shouldered by Palestinian citizens in the Gaza Strip, who already suffer from a decline in living standards, as well as a deterioration of economic and social conditions, engendered by many factors, not least of which is the unjust Israeli siege imposed on the Gaza Strip for the past eight years.”

The adoption of new taxes and the Gazan ministries’ insistence that they be implemented despite all negative feedback portends that the situation in Gaza will remain as is for quite some time. The factions lack the mutual trust necessary to achieve true reconciliation, allowing the Palestinian government to extend its effective control over the Gaza Strip.