Israelis devastated by each soldier's death

Israelis have accepted to a certain degree the fact that they are in constant war, with civilians often paying the price, but find it difficult to come to terms with soldiers being killed. 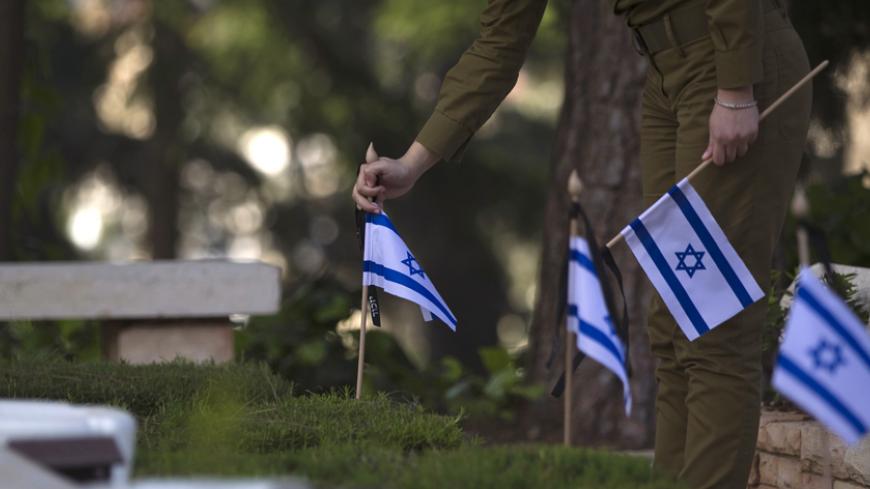 An Israeli soldier places flags on graves of fallen soldiers during a ceremony at the Mount Herzl military cemetery in Jerusalem, April 19, 2015. - REUTERS/Ronen Zvulun

The following scene is engraved in the minds of many Israelis: Last summer, a few days after the conclusion of the Protective Edge campaign, Paratrooper Brigade Cmdr. Col. Eliezer Toledano paid a visit to the neurosurgery ward of Rabin Medical Center in Petah Tikva. There, surrounding the bed of an unconscious young officer, huddled his large family as they waited for the brigade commander. These were the parents, wife, siblings and children of 29-year-old Maj. Hagai Ben-Ari, who had been critically wounded in a campaign battle and in a coma since.

A short time before the conflict had erupted in Gaza, Ben-Ari was called to Toledano’s office. At the end of his interview, the outstanding paratrooper was given good news: He would soon be appointed commander of the elite and celebrated Paratroopers Unit. Reconnaissance commander is a prestigious, highly coveted position once held by former Chiefs of Staff Moshe "Bogie" Ya’alon, Shaul Mofaz and Moshe Levi as well as by Deputy Chief of Staff Matan Vilnai and others. Ben-Ari then went on a short vacation to Eilat with his family, and was supposed to receive official command of the Reconnaissance Unit upon his return.

But the war in Gaza broke out during his vacation. Ben-Ari and his reconnaissance soldiers engaged in harsh battles in Khan Yunis, where Ben-Ari was critically wounded by sniper fire to the head, putting him into a coma. Ben-Ari, who had not yet been officially promoted, lay unconscious in the hospital. For almost three weeks, he fought for life until the night of Sept. 20, 2014, when doctors informed the family that his condition was deteriorating quickly and his minutes were numbered.

Close to 2 a.m., Toledano arrived. He entered the hospital room in which most of Ben-Ari’s family members were concentrated. Next to the officer’s wife, Moriya, Toledano gently held one of his hands. The brigade commander spoke to his officer, though he knew that Ben-Ari could not hear him. He praised Ben-Ari for his combat skills, his leadership and professionalism as an officer and commander. Then he added, “I ask your permission to complete [the appointment process] and add your name to the list of paratrooper reconnaissance commanders.” Thus, Ben-Ari was promoted and, for a short time, the Israeli Paratrooper Reconnaissance Unit had two commanders: both Ben-Ari's replacement and Ben-Ari as he lay in bed.

A few days earlier, the popular Israeli singer Muki had visited Ben-Ari’s hospital room. Ben-Ari and his three children (including Ofri, 10 months old) were particularly fond of Muki’s song "Father’s Child." Muki sat with his guitar and sang the song for Ben-Ari while his family and children wiped away their tears. The Israeli public kept close track of the wounded officer, whose tragic story engaged all hearts and minds and caused oceans of tears to be shed.

Amazingly, Ben-Ari survived. No, he did not return to consciousness, and the chances that he will do so are slim. Doctors say his coma will be permanent; soon Ben-Ari will be transferred to an independent residential unit adjacent to his parents’ home.

Today, April 21, Israel commemorates those who fell in its defense on Israel's Memorial Day for fallen soldiers and victims of terror. This is the saddest day of Israel’s entire year, a day of deep, genuine sorrow. Memorial Day is held only a week after Holocaust Day, which commemorates the greatest Jewish trauma of all time: annihilation by the Nazi machine. While the number of Holocaust survivors living in Israel is diminishing at a rapid pace, there is no lack of Israel Defense Forces (IDF) fallen, whose number grows every year. The Protective Edge campaign added 67 new names to the IDF memorial monument and inflicted wounds on hundreds of others.

Israeli society has undergone a strange process in recent decades: The public exhibits a surprising tolerance for civilian victims of terror or combat (such as rocket attacks), while the loss of IDF soldiers is perceived as a depressing, almost paralyzing, national catastrophe. Things were very different in the early decades of the state. Then, the IDF’s role was to protect the civilians of the young state. But as the years went by, the pendulum swung to the other side. In the Second Lebanon War, the death of five IDF soldiers in the battle of Maroun al-Ras paralyzed the public and prompted a deep depression that continued throughout what remained of that war. In the Protective Edge campaign, seven Golani Brigade fighters were killed in a harsh night of fighting in the Gaza City neighborhood of Shajaiya, and this became a national tragedy.

Israelis accept victims from within their midst as a matter of course, but it is harder for them to see their soldiers fall. Perhaps this is because of the special status of the IDF as the “army of the nation.” Or perhaps it's because the IDF is the only shield that separates the Jewish state from the bleeding, exploding, seething, slaughtering and slaughtered Middle East. One way or the other, we’ll soon get to the stage where civilians protect the army instead of the reverse. By the way, in the next flare-up on the northern front, it is estimated that the number of homefront casualties will be much higher than the number of soldiers killed on the front lines because of the intense firepower of Hezbollah’s rocket arsenal. Indeed, it’s an upside-down world.

The lack of tolerance for the death of Israeli soldiers reaches an extreme when it comes to the abduction of soldiers by terror organizations. The Gilad Shalit saga continued for 5½ years and became a sort of Israeli obsession. Eventually, even Prime Minister Benjamin Netanyahu caved; although he had preached all his life not to give in and never negotiate with terror, he freed hundreds of murderers in exchange for one soldier. In the Protective Edge campaign, there were two additional cases of the bodies of Israeli soldiers being stolen: Staff Sgt. Oron Shaul, whose body was never found after being killed in an armored personnel carrier in Shajaiya; and 2nd Lt. Hadar Goldin, a cousin of Ya’alon's. Goldin was killed and his body was taken by Hamas combatants to a tunnel on the last day of the fighting after a cease-fire had already gone into effect.

Unlike before, to avert a replay of the Shalit saga, the IDF adopted preventive tactics to neutralize this kind of trauma in advance: Under the direction of the chief military rabbi, Brig. Gen. Rafi Peretz, and Dr. Chen Kugel, the IDF's chief pathologist, these two fighters were declared killed in action. Their families were informed and even sat the Shiva, even though in the case of Shaul there was no body to bury. In the case of Goldin, soldiers succeeded in retrieving some remains identified through DNA.

These steps were taken after battlefield findings proved that the two were no longer alive. The actions averted years of suffering and uncertainty on the part of the families and exorbitant payment by the state in exchange for bodies or information. The two families accepted the decision. Recently, after the release of new reports about the battle in Shajaiya, the Shaul family has changed its mind and is now demanding answers from the state as well as the return of the missing soldier, “no matter in what condition.” It is only a question of time until a public command center is opened. The vision engraved in the collective consciousness from Shalit’s years of captivity will return to the streets, television screens and the Israeli consciousness. The IDF is the “army of the nation,” and thus the nation feels duty-bound to guard and protect it. That’s the way it is here.