Intolerance becoming all too common in Israel

A heated public debate has been building between the extreme left and right in Israel, threatening to explode into violence. 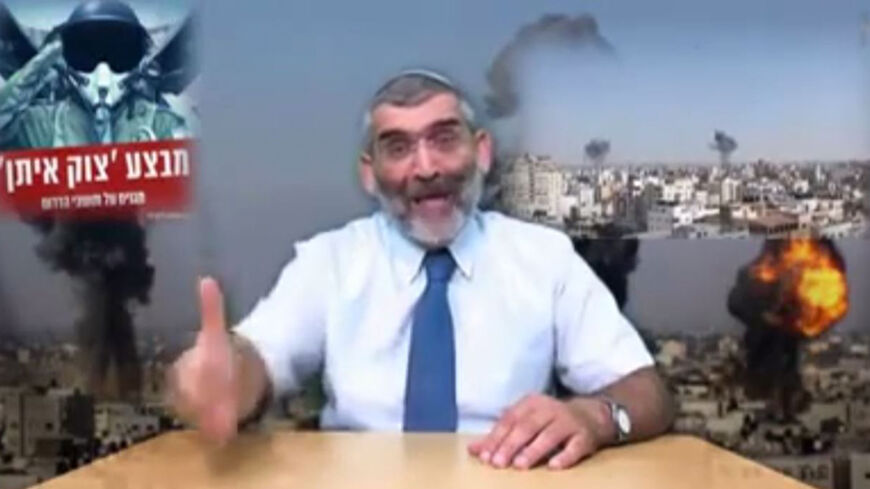 A still from a video posted by former Knesset member Michael Ben-Ari calling on Israel to conquer Gaza. - YouTube/Nisim Dahan

On the evening of July 13, former Knesset member Michael Ben-Ari, who now heads the Fund to Save the Nation of Israel, used his Facebook page, under the header “cut off their electricity,” to call on his followers to join demonstrations scheduled to take place July 16 at dozens of major intersections throughout the country. The demonstrators will call on the government to conquer Gaza and cut it off from the power grid.

It seems Operation Protective Edge has been good to Ben-Ari’s Facebook page. Over the last few days it has become a forum for vehement incitement against the left. Ben-Ari, who's on the far right of the political spectrum, is constantly expanding his list of targets. In fact, he now calls for shipping the chairwoman of Zionist Meretz, Knesset member Zehava Gal-On, to Gaza. At the same time, he lashes out and curses, fouling the mood and further exacerbating the existing tensions between right and left over Operation Protective Edge.

On July 13, shortly before he made his call to “cut off their electricity,” Ben-Ari posted a video on Facebook explaining why Israel must conquer Gaza immediately. It's an Internet manifesto seething with vitriol. He mocked the State of Israel, saying, “For over a week, a pathetic gang from Gaza has forced an entire country to its knees, despite its huge military budget.” He went on to accuse various news anchors, among them Channel 2's Yonit Levy, of aiding the enemy and lashed out at the irresponsibility of the government in abandoning its citizens, saying, “No country in the world would agree to let its children come under fire.” He added, “They shoot at citizens; we shoot at citizens. That’s exactly what [Russian President Vladimir] Putin did in Chechnya.”

Then he turned to Gal-On, whom he calls “Zehava Occupation,” saying, “She works for the enemy every hour of every day. She is the enemy’s spokeswoman.” He addressed her directly, jeering, “We can’t defeat terrorism with war. I’m telling you, Zehava Gal-On, that for us to defeat terrorism with war, we have to defeat you first. We’ll send you to Gaza. You can be their spokesperson there, and we will take care of them the right way.”

Ben-Ari represents only a fringe political group, so the mainstream media, which he also considers an “enemy of the people,” prefers to ignore his provocative statements. The problem, however, is that since the kidnapping and murder of the three Jewish teens, the retaliatory murder of an Arab teen and the launch of Operation Protective Edge, provocative statements from the fringes, like those released by Ben-Ari and his supporters, expand the boundaries of this violence-drenched dialogue.

When Knesset members from the ostensibly center-right Likud Party, like Deputy Defense Minister Danny Danon, demand that Israel “stop providing fuel and electricity to the Gaza Strip,” or Miri Regev promotes action to “prevent the people of Gaza from receiving basic goods and block the crossings and main roads,” it should be no wonder that in the midst of all the fighting in Gaza, the far left and right are fighting each other in Tel Aviv. Even with the air-raid siren wailing throughout the city, police were needed to separate the two sides.

The demonstration took place on the night of June 12, in Habima Square in Tel Aviv. Ever since it was renovated three years ago, the square has become a nerve center of political and social activism, particularly of the left — a “Tahrir Square” of sorts.

A right wing demonstration in reaction to rocket fire on Tel Aviv is held at the HaBima theatre square in Tel Aviv, July 12, 2014. (Photo by Tal Schneider)

Demonstrators from radical left-wing groups poured into the square that evening to demonstrate against Operation Protective Edge. The signs they carried were provocative. They denounced the Israel Defense Forces (IDF) and called on people to refuse to serve. There were slogans like, “The IDF is the most moral terrorist organization in the world,” “Racist regime,” “Stop the massacre in Gaza” and “Occupation is terrorism,” condemning the current operation that, according to polls, has widespread support among the general public. This is not the first time that the far left has demonstrated against the IDF, but without the right-wing demonstrators who came to confront them, the demonstration would have broken up as soon as the siren went off and received minimal media coverage, if any.

But things heated up that evening. Rapper Yoav Eliasi, known as “The Shadow,” showed up with a few dozen young people from right-wing organizations like Lehava (a group dedicated to preventing assimilation), wrapped in Israeli flags and some in masks. They started taunting the demonstrators from the left, with “traitor” and much worse. For the most part they cursed the leftist activists, wishing them any number of cruel deaths. It didn't take much for the fracas to devolve into an all-out brawl.

As someone who was present nearby, the feeling was surreal. Suddenly the siren went off. The leftist demonstrators were subjected to a barrage of curses and had things thrown at them as they ran for protected spaces nearby. The violence even reached a nearby cafe, when a right-wing activist who asked for some water was outraged when someone commented, “Maybe it will cool you off.” He burst inside and started a ruckus.

That evening in Habima Square was unusual in terms of both its level of violence and its timing. Traditionally, an atmosphere of unity has always transcended politics at the start of any military operation or war. As the old saying goes, “When the cannons roar, the muses are silent.”

Meanwhile, Eliasi continued to incite the crowds, boasting on his Facebook page, “Together we are a powerful force confronting the real enemy, who wanders freely among us: the radical left.” His post received extensive media coverage.

The outbreak of violence at the demonstration in Habima Square is reminiscent of the attempt to force out Minister of Economy and Trade Naftali Bennett from the Haaretz peace conference July 8 for being a "fascist." They are part of the same violent dialogue from the far left and the far right alike that can easily make the leap from verbal provocation to real physical violence. We saw that happen only recently, when it turned out that Arab teen Mohammed Abu Khdeir's killing was committed by young Jews seeking revenge. Regardless of how infuriating the signs held up by the radical left may have been to some, anyone who was at the demonstration at Habima Square could sense the violence mood incited by Eliasi and his friends. Anyone who saw it knows that we are standing before a slippery slope, which could end with people getting hurt in demonstrations. This should be a wake-up call to politicians on both sides of the political spectrum. It is incumbent on them to restore calm, even with all the passion that the war evokes. It is up to them to stop seeking to gain popularity by pandering to their electorates, right now. One Emil Grunzweig is enough.