Israelis wonder how Europe will change after Paris attack

Many Israelis think that the terror attack in Paris could be a watershed moment, when the Europeans have to change their human rights approach in the face of fighting radical Islamic terrorism. 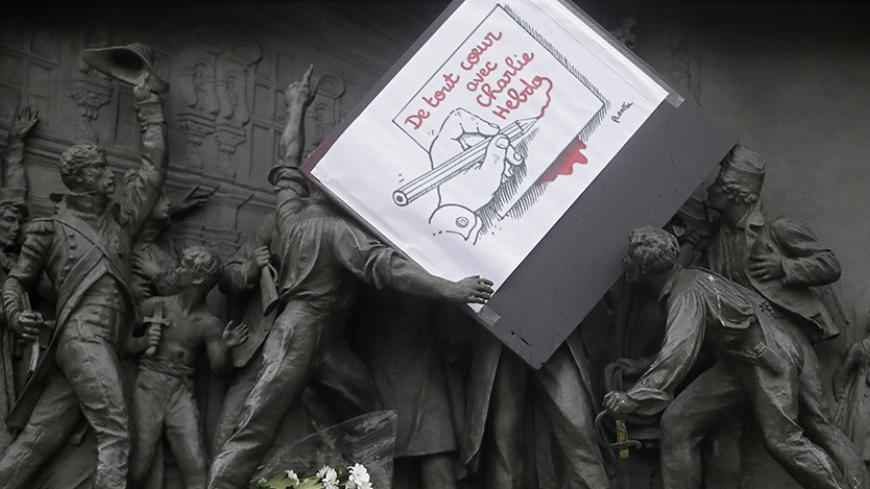 A placard with a cartoon by cartoonist Plantu is placed on a frieze on the Republic statue at the Place de la Republique in Paris, Jan. 8, 2015. - REUTERS/Gonzalo Fuentes

A few years ago, before the Arab Spring broke out in the Middle East and became a gloomy, rainy winter, I had a talk with a former senior official in Israel’s Shin Bet on condition of anonymity. This man’s entire life was dedicated to the war against terror; acquiring him a long, personal and even intimate familiarity with radical Islam. At the time, he told me, “Israel will, sometime in the next decade, become one of the safest places in the Middle East. Afterward, it will become one of the safest places in Europe.”

I asked him for an explanation. “We have been coping with radical Islam for generations already,” he said. “We are prepared, we are realistic, we understand and know what we are up against. They are not.”

I asked who "they" are. “’They,’ first and foremost, refers to the traditional Arab regimes, but not just them. The Muslim minority in Europe will raise their heads sometime,” he said. “When that happens, I don’t want to be there. All hell will break loose on the Europeans who continue to babble about their human rights and don’t understand that radical Islam lives in another reality, with a different set of rules, on another planet.”

Amos Biderman, one of the most successful contemporary Israeli caricaturists, penned a front-page column today, Jan. 8, for Haaretz under the headline, “Paris attack shows that the bad guys have won.”

“They have already won,” Biderman wrote, and admitted that he won’t depict Islamic issues or the Prophet Muhammad with a 10-foot pole, since the storm over the Danish cartoons. “The bad guys … have beaten us, big time,” Biderman wrote. “All of Europe is shaking and so is America. Now there is no cartoonist or publisher who would dare start up with them.”

The massacre at the Charlie Hebdo offices in Paris caught Israel in the middle of a fierce, emotional dispute regarding the decision of Israel's military advocate general Maj. Gen. Danny Efroni to conduct a series of criminal investigations into some of the harsh battles of the Protective Edge campaign. Topping the list are the events of Aug. 1, the day when the body of 2nd Lt. Hadar Goldin was snatched and the Israel Defense Forces (IDF) invoked the Hannibal Directive at the presumed site of the abduction, in the southern Gaza Strip. This tactic is used by the IDF whenever the abduction of an Israeli combat soldier or officer is suspected. Under such circumstances, the IDF delivers heavy fire on the suspected area with all the means at its disposal, to avert the abduction at any price.

On Aug. 1, some dozens of Palestinians were killed, most of them civilians, as a result of the IDF fire intended to avert the kidnapping. The abduction was indeed prevented, because a young Givati brigade officer risked his life to enter the tunnel into which Goldin had disappeared. The officer managed to bring back remnants of the body, thus saving Israel from another Gilad Shalit affair and preventing a scathing new national trauma that could have completely transformed the Israeli agenda.

This week, the Israeli media was filled with petitions and exclamations from officers and combat soldiers who oppose criminal investigations against those who don IDF uniforms and fight in defense of the state and its citizens. I was asked this week by a senior officer in the Southern Command who asked not to be named, “Who will agree to volunteer for a combat unit and wage war against Hamas in Gaza if he knows that no one will back him up and that sometime or other, after the battles are over, someone will try to incriminate him? Our strength lies in our solidarity and the knowledge that the entire Israeli people stands behind its fighters. Now, when it turns out that jurists also stand around listing all kinds of errors and mistakes that are made in the heat of battle, many people will think twice.”

But there are no less convincing rationales on the other side of the coin. Since the Palestinians have already signed the Rome Statute and are preparing to submit a complaint to the International Criminal Court (ICC) in The Hague against Israel for supposed war crimes during the course of the Protective Edge campaign, an IDF investigation may give the ICC’s prosecutor the ladder from which to descend from his tree. In other words, it could offer a pretext to declare that no international criminal intervention is needed since the IDF, as the army of a democratic country, is entitled to conduct its own investigations of incidents with criminal implications.

Right in the middle of this controversy came the massacre in Paris.

“I hope that the Europeans will now understand how disconnected they are from reality when they talk about human rights, rules of war and exalted moral principles. Radical Islam does not recognize any of these things. In this respect, Hamas does not differ much from the Islamic State or al-Qaeda. They share the same Sharia; they aspire for a caliphate in the Middle East and afterward the rest of the world and they share the same internalized brutality,” said an Israeli senior security officer, unnamed as he serves in a sensitive position. “Our fight against Hamas is in that category — it is the framework where the Europeans now understand that they have to start battling al-Qaeda and the Islamic State in their own backyards. When you struggle against an enemy of this type, you need the correct tools. In World War II, the West adjusted its cruelty to what the Nazis were perpetrating. There was no other way to take control away from this evil. From a neutral viewpoint, the [allied bombing] of Dresden was a war crime. But history doesn’t view it that way. The context of the bombing, and afterward the dropping of atomic bombs over Hiroshima and Nagasaki, turned Dresden-Hiroshima-Nagasaki into necessary events meant to save human life and shorten the war,” he said.

Yes, there is some gloating going around Israel these days regarding the Europeans. But there is also concern. The fact that Europe automatically takes the side of the Arabs in almost every conflict or dispute with Israel has made Europe an almost derogatory word on the Israeli street. Thus, many in Israel view the horrifying slaughter in Paris as a sort of watershed that may mark a strategic change in the way the Europeans view their situation.

“It reminds me a little of the Japanese attack on Pearl Harbor in World War II,” a senior diplomatic source told me yesterday on condition of anonymity. “Until then, the Americans tried to stay out of the war, tried to look the other way, to act as if this war were none of their business. Pearl Harbor thrust reality into their faces and changed the war. It could be that what happened in Paris will generate a similar change in Europe.”

But not many Israelis pin their hopes on such a transformation. Instead, the opposite is quite likely to happen. The Israeli media is filled with European horror stories, including the Israeli TV's Channel 10 serial by popular Arab affairs commentator Zvi Yehezkeli. Yehezkeli went to Europe and returned with harsh evidence of how Islam has taken over European symbols and the Islamic effect on the European lifestyle that is likely to change in the coming years.

The average Israeli does not place much stock in his European peers. He views them as cowards, as people addicted to the easy life who sweep the real problems under the rug and ignore the clear signs that reality is sending their way.

“On the other hand,” I was told this week by a former Israeli ambassador who has served in numerous positions in Europe, “one day, it has to end. Islam does not acknowledge other religions, and it has a substantial violent nucleus that is not willing to accept the other, his beliefs and lifestyle. The Big Bang will come, sooner or later. I hope, for the Europeans, that it won’t arrive too late, when they’ll be too weak to put up a fight and win the bloody war that awaits them.”