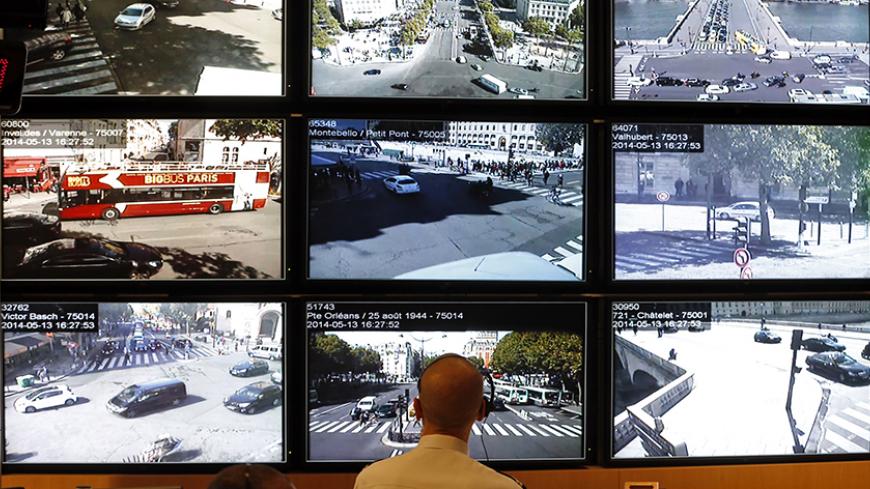 A policeman looks at screens at the Paris Prefecture control room, which display images from more than 1,000 cameras used to monitor traffic circulation, monuments and public areas in the French capital, May 13, 2014. - REUTERS/Charles Platiau

Three senior officials who dedicated their lives to issues revolving around security, intelligence and terror talked to Al-Monitor about the wave of Islamic terror that is washing over Europe and the ways of coping with it. The first was Maj.-Gen. (Res.) Yaakov Amidror, formerly a senior at the intelligence branch of the Israel Defense Forces and military CEO of defense ministers. His last post so far was head of Israel’s National Security Council and national security adviser to Prime Minister Benjamin Netanyahu (until November 2013). The second official: Rami Igra, former senior Mossad official with expertise in terror issues and former head of the missing-In-action division of Israel’s intelligence organization. The third, who preferred to remain anonymous, is also a high-placed former official in the Israeli intelligence services, who has served as head of Military Intelligence.

“The Europeans have four problems,” Amidror said. “Three of them are fundamental, one is technical. The first problem is one of definition. You have to call a spade a spade. The terror that they currently face is not ideological terror. It is not the [Italian] Red Brigades nor the [German] Baader-Meinhof, and not even criminal. This terror is fueled by strong religious ideology. True, it’s hard for the Europeans to say this, but the fact is that while not all Muslims are terrorists, all the terrorists in this era are Muslims. You cannot win without a precise determination of the enemy.”

“The second issue,” Amidror added, “is intelligence. You have to map the target population and the districts in which to operate, to get intelligence. After all, it’s clear that we won’t search for these terrorists among the Calvinist population in Switzerland. There is no other way than using aggressive intelligence. The tried-and-true formula is if you won’t wiretap, you won’t know. Yes, civilians, too. And yes, your own citizens. Because these are your citizens, they live in your midst, studied in your educational school system and that’s why you have no choice. You must wiretap them, follow them, because without it there is no intelligence and without intelligence you can’t win. France learned this lesson the hard way last week.”

“The third point,” Amidror said, “is the use of intelligence. In the criminal-penal world, if you wiretap and hear a gang of lawbreakers planning to rob a bank, you can’t do a thing except to continue to keep tabs on them. You can’t prosecute people for their intentions. But in the world of terror, when so many human lives are at stake, you have no choice but to take preventative action, to the point of administrative detentions.”

The fourth issue, according to Amidror, is technical. “Europe has 28 states and 28 police forces. There is no federal apparatus that integrates all the information. You can travel from Portugal to Lithuania without being checked even once on the way. Under such circumstances you can do anything and then disappear, without anyone being able to track you down. You cannot fight terror this way,” he said.

Igra was even more scathing. “The only way that the European security services can cope with the Muslim terror threat is to acknowledge reality and mark the Muslim population as a target for intelligence collection and ongoing coverage,” he said. “There is no alternative for this step; without it there is no chance of achieving anything in the terror-reality of the contemporary era. You must obtain ongoing intelligence coverage of the target population on a territorial basis. This method is employed by the Israeli Shin Bet and necessitates intelligence collection officers who are assimilated in the population in the districts under their responsibility. This is exactly like the neighborhood police patrolman who is responsible for order and security in his neighborhood. The method also necessitates field coordinators and operating human sources [agents] within the population. These agents will survey the suspicious elements who might develop into terrorist threats. As soon as an intelligence collection officer pinpoints a civilian who arouses suspicion, the officer will operate additional means against him — interception and coverage, HUMINT and SIGINT [using human or technological means] — to remove the threat.”

But here you’re talking about Europe, I told Igra; not Nablus and Tulkarm, not even Gaza. We’re talking about Paris, Brussels, Berlin and Geneva. Human rights, privacy, liberty — all these are supreme values.

“I know,” Igra said. “I hope that the Europeans don’t have to learn the hard way that they have no choice but to make legislative changes that will allow the state to recruit sources and operate within at-risk populations. If there is another way, I’d be happy to hear about it,” he added. “Sources can also be recruited through offering governmental perks, which is also a method for which there is no substitute. And don’t ever forget that ultimately, the goal is to preserve human life, and that is, in my opinion, the holy of holies. The right to life surpasses all the other rights.”

I asked Igra, “Aren’t there any less invasive, civic ways to cope with the problem?” He responded that “to avert and halt the current wave of radicalization in Europe you have to operate on the civic plane as well. Authorities and institutions have to be created that can bridge the cultural gap between the Muslim and European populations. Radicalization is the outcome of economic hopelessness and perceptions of deprivation among the younger generation. Youth organizations and cultural centers must be founded; resources, energy and thought must be invested. It is a long, sisyphic process but that is the real solution. The intelligence and enforcement I talked about earlier are the immediate steps to be taken to halt the carnage, but not the solution in the long run.”

The third interviewee, a former head of military intelligence, agreed with the principles proposed by his two colleagues. He said: “I would advise the Europeans to move the dial on the continuum between two opposing, both important, sets of values: privacy and human rights on the one hand, and the human right to life and obligation to preserve public security on the other hand. The Israelis and Americans have found a more balanced working-point in which the law enforcement authorities are allowed [once authorization has been received and with appropriate limitations] to gather intelligence on the country’s citizens for the good of public security and averting domestic terror.

“The Europeans still cleave to their 'politically correct' ideas, thus they have limited efficacy in dealing with domestic terror cells. In addition, they don’t prevent the return of foreign fighters with European passports who resided in the Middle East and trained or fought with organizations such as al-Qaeda, Jabhat al-Nusra, the Islamic State and other radical jihadist organizations. They don’t intercept enough those returning with a European passport — as long as they have not perpetrated a crime in Europe — and when that does happen, it is sometimes too late. Especially since they are unwilling to put the names of these fighters on a list of 'intelligence targets,' and collect intelligence on them.”

The three Israeli security people, with the accumulated experience of 105 years of fighting terror, are keenly aware that their proposals and analyses will be received by European ears as incomprehensible gibberish, impossible and inadmissible. Yet, they still insist that there is no other way. One of them said, “Israel has lived in this reality of indiscriminate terror from the day it was born. We don’t know any other way of life so we have no problem in adapting to it. But Europe is familiar with another kind of lifestyle: the good life, unrestricted and worry-free. If Islamic terror does threaten to deprive the Europeans of their way of life, they [Europeans] will, ultimately, have no choice but to decide between two clear alternatives: to surrender or fight.”