The massacre at the French satirical weekly Charlie Hebdo hasn’t changed the practice of Israeli cartoonists of refraining from insulting Islam, picking political targets instead. 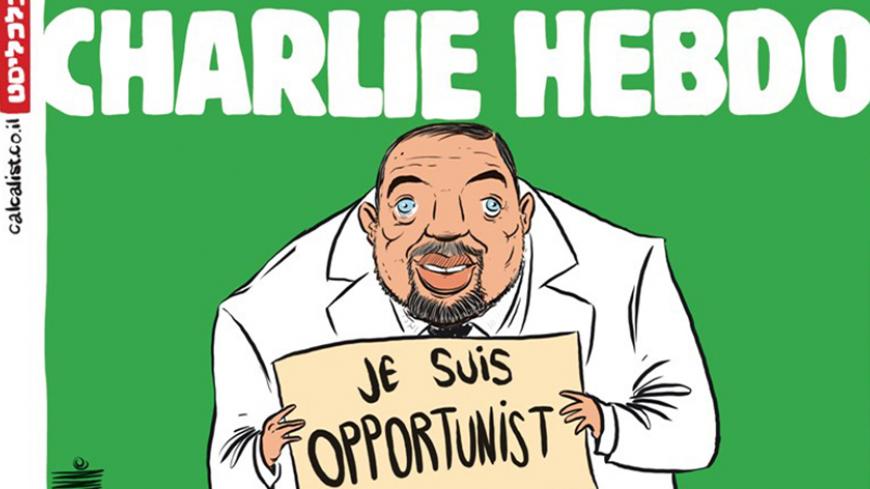 “Now people have started to understand the importance of cartoons; that they’re more powerful than a column; that a good and apt drawing could express much more than words. Visuality is engraved upon the mind and that’s what we intend. There are some peaks, though sad, thanks to which we understand the power of a drawing,” says Internet cartoonist Or Reichert, who has drawn cartoons for major Israeli newspapers in the past and today runs a popular Facebook page.

The distribution of the first issue of Charlie Hebdo after the Jan. 7 massacre in Paris at the publication's office was accompanied in Israel by a small scandal Jan. 25, when the retail bookseller Steimatzky wanted to hold a sales event for several hundred copies. This brought a vocal protest from Muslim elements in Israel, in response to which Avigdor Liberman, the foreign minister and chairman of Yisrael Beitenu Party, called on his activists to purchase “thousands of copies” and distribute them for free, as an act of support of freedom of speech. In the end, Steimatzky canceled the event, and sold the issue only online. The limited number of issues sold out within minutes.

Israeli cartoons have a storied legacy, but in Israel the limits on cartoonists are more restrictive from the outset than those in France. Criminal law in Israel forbids insulting the sensibilities of religion and ethics. While there are ways of skirting these prohibitions, it’s hard to believe that a senior cartoonist in Israel would want to directly insult Prophet Muhammad and that there would be an Israeli publisher who would agree to publish such a cartoon.

Perhaps here lies the constraint that most limits Israeli cartoonists: the desire to convey criticism in a subtle and implicit way to a public that consumes powerful news every minute. The tragedy of Charlie Hebdo has suddenly drawn public attention to local cartoonists much more than usual.

“I don’t think they’re using us in a distorted way,” says Amos Biderman, a cartoonist at Israeli daily Haaretz, “there’s a real and honest shock at the slaughter of cartoonists in France. Everyday treatment of us hasn’t changed — if I aggravate someone, I always get threats in comments, on Twitter and Facebook. People tend to get upset by a cartoon because they catch the point very quickly. There’s no need to start reading some bothersome columnist, you can get angry right away.”

On the other hand, Yonatan Wachsmann, a cartoonist at the Israeli daily Calcalist, says that “in democratic countries cartoonists will always play a marginal role. In countries that are more dictatorial and with less freedom of expression, the role of the cartoonist will be more important and more central. From the standpoint of the audience as well as the government.”

“I wouldn’t draw cartoons about Muhammad,” declares Biderman, “not because I’m afraid or because of violent threats from radical Islam, but because the most basic rule in cartooning is to criticize your own tribe. Allah doesn’t interest me and Jesus doesn’t interest me. It’s not my business. If I have complaints, it’s toward the rabbis, some of whom are racist, outmoded, homophobic, corrupt. I also think there’s something strange about Charlie Hebdo’s cartoonists fixating on Muhammad. Of course I’m afraid, because my life is more important to me than a cartoon, but beyond that I don’t get the obsession. I relate [in my work] to what happened yesterday and respond to it. With Muhammad there’s nothing new, he always was and always will be. In my view there’s no basis for an up-to-date critique.”

Wachsmann agrees with him: “I believe in the unwritten rule that you can laugh within the family. When it comes to other families — I leave it to them to deal with it themselves.”

Wachsmann chose to describe the “Steimatzky scandal” with a cartoon based on the Charlie Hebdo cover that had Muhammad carrying a sign; in Waschmann's Jan. 26 drawing, Liberman holds a sign that says, “Je Suis Opportunist.” Wachsmann said, “What I had to say about Liberman I said in a cartoon. Beyond that, to a job that yesterday seemed ordinary, maybe fun, suddenly another dimension has been added — monstrous and distorted. In the end the cartoonist is a clear and tangible warning light for a much bigger issue. The murder at Charlie Hebdo was actually a meeting of two opposing civilizations.”

Biderman declares that he intentionally refrained from dealing with the Charlie Hebdo massacre on the day after. “I didn’t want to fall into the wave of cliches of the tributes that we saw afterward, and anyway what I had to say was more serious and important.” Instead of drawing, Biderman chose to write a column with the headline, “I’m afraid of radical Islam.”

For him, so he says, fear is not what dictates the cartoons. “Because it’s a matter of culture and attitude in Israel. It’s a vulgar insult that doesn’t deal with any particular issue.”

Reichert also doesn’t want to deal with Muhammad, “Because that’s not where I am. I criticize rather than insult. For instance, I would attack terrorists and their way of thinking. Not because they are Arab, but simply because most terrorists who have killed Jews were Arab.”

“When I want to get a message across to the subjects of my critiques, I try to do it in a way that the other side would be able to look at it,” says Wachsmann. “While I draw caricatures, I try not to draw them in too extreme and grotesque a manner. It’s true that along the way it’s simply impossible to prevent hurt feelings and at some point someone is bound to be insulted, but I always work with self-imposed boundaries that are subject to the message I want to get across. The blunter I am, the more audience I will lose, and as it reaches more people it seems it would also have less bite. There are many more limits and nuances you have to navigate. I try to maintain balance and still succeed in achieving the goal.”