The lack of security and the poor economy are forcing many young Iraqis to think about emigrating to the West, even if illegally. 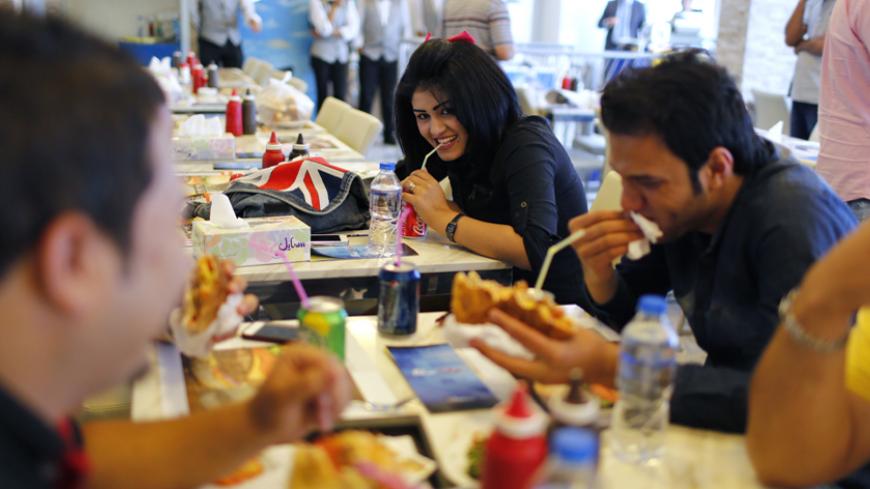 Iraqi youths have lunch at a restaurant in eastern Baghdad, May 4, 2014. - REUTERS/Ahmed Jadallah

Youths in Iraq dream of leaving the country. The successive wars since 1980 and in particular the violence that has been part of daily life in Iraq since 2003 have caused waves of emigration over the years.

Iraqis have lived through many conflicts over the last few decades: the Iran-Iraq war of 1980-88, the Iraqi invasion of Kuwait in 1990 and the subsequent embargo and war, followed by the war in 2003 to topple Iraqi President Saddam Hussein. The conflict between Iraqi forces and Islamic State (IS) militants, who occupied Mosul on June 10, 2014, have further escalated the violent situation Iraqis, young and old, live in today. Youths are again searching for a new place to live in, outside Iraq.

Social researcher Qassim Mohammad told Al-Monitor that the emigration issue has become a significant concern as “a lot of young people now believe that every war in Iraq gives birth to a new war, and that seeking a future in Europe or the United States is their best option.”

Luay Hamid graduated from the faculty of agriculture at the University of Baghdad in 2012. He told Al-Monitor, "Thinking about emigrating is not enough. One must have the money for it, [money] that a lot of young people don’t have. … I tried to emigrate to Europe in 2013 after I had saved $4,000. I traveled to Jordan and stayed there to find a way to be smuggled into Europe. … I met two smugglers who asked for $10,000 to get me to Germany or the Netherlands via Istanbul, Turkey. But I had to return to [Iraq] because I didn’t have that much money.”

According to a 2013 study by the International Organization for Migration in cooperation with the British Foreign Ministry, 99% of young people in southern Iraq and 79% of those in Iraqi Kurdistan wish to emigrate.

Many Iraqi youths have succeeded in emigrating to Europe. But some were not so lucky. Ahmed Saad told Al-Monitor, “[My] attempt to emigrate to the European paradise in December 2013 ended in Lebanon, where the smuggling intermediaries blackmailed me out of $6,000, which forced me to return to Iraq after spending a full year in [Lebanon].”

In regard to the reason he wanted to leave Iraq, Saad said, “Unemployment is what drove me to look for a future outside Iraq. Even though I graduated from the Institute of Technology in Baghdad in 2011, I could not find a job. … The other reason pushing young people like myself to emigrate is a feeling of instability in security and politics. My expectations that the security chaos in Iraq would continue were true. IS swept through the city of Mosul on June 10, 2014, months after I returned from Lebanon.”

Qasim Mozan, a writer and editor of the community section of the Iraqi newspaper Al Sabah, told Al-Monitor, “The dream of emigrating to Europe still flirts with the imagination of Iraqi youth. This feeling is shared by Arab youth, who are besieged by unemployment and a lack of freedom as they search for liberty and security.”

Mozan said, “The youth who emigrate believe that [foreign] countries would provide them with security and psychological comfort, and relieve them of their frustration, thus releasing their creative energies.”

He added, “The war in Iraq against IS is in fact pushing the young people to think about emigrating.”

Social researcher Ousama Alyaseri agrees. He told Al-Monitor, “The war factor is a temporary cause for emigrating from Iraq. But the long-term causes are poverty and unemployment. Young people think the situation is better abroad.”

According to field polls he conducted, Alyaseri said, “Iraqis prefer emigrating to countries such as Germany, Sweden, Norway, Finland, Belgium and the Netherlands. … My following up on the matter indicates that Iraqi authorities have no statistical data of the rate of emigration.”

The smuggling operations to Europe often happen through smuggling networks transporting illegal immigrants through the woods, between countries’ borders and across the sea in small boats.

But some disagree that the war against IS has encouraged emigration. Hassan al-Sayed Salman, a writer, political analyst and the former president of the board of trustees of the Iraqi Media Network, told Al-Monitor, “Emigration has subsided for the time being and it has diminished in intensity because the young people in Iraq are busy volunteering as fighters. … There are no precise statistics on emigration and counter-migration. … Talk about a high emigration rate for Iraqi youth is politically motivated and is intended to portray Iraq as a country that is unsafe or one that is going through an unnatural condition.”

In the same context, Jawad al-Shammari, the director of the information office of the High Commissioner for Human Rights in Iraq, told Al-Monitor, “The pace of emigration has dropped following the religious fatwa to conduct jihad against IS on June 10, 2014, because it made a lot of young people think about defending their country. So they joined the Popular Mobilization Units to fight [IS].”