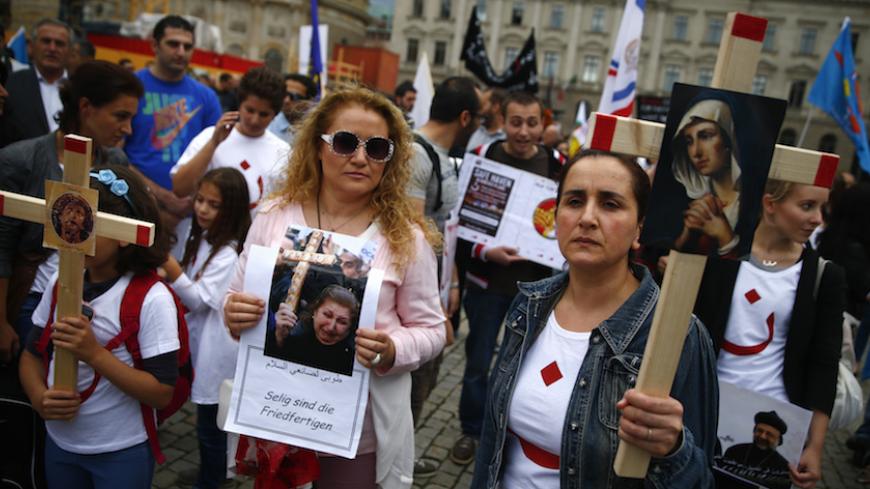 Media outlets are broadcasting the departure of hundreds of thousands of Syrians and Iraqis from their countries toward Europe by boat, train or on foot. The scenes of escape and displacement coupled with panic and catastrophe are reminiscent of the past eras of broad immigration.

The issue of the displaced Syrian people has received special interest, given the conflicting international stances on their situation. However, Iraqis, too, should be in the spotlight, as they share the same plight.

This is not the first time Iraqis have emigrated from their country, but the numbers have never been as large as they are today. The huge change will affect the demographic situation and raise questions about the fate of minorities. There are indications that the minorities of Iraq's social structure will be endangered if their displacement persists.

The Internal Displacement Monitoring Center in Geneva announced that the number of displaced Iraqis within Iraq reached 4 million in mid-June 2015, compared with 3.5 million in December 2014, according to a survey by UNHCR, the United Nations refugee agency.

The deputy head of the Iraqi parliament’s committee on displacement, Haneen al-Qaddo of Ninevah province, said in an Aug. 27 press statement, “The number of immigrants from Iraq is constantly on the rise due to the country’s security situation.” He said his committee does not have an accurate estimate because of the lack of official places to register them. He added, “Most of the immigrants are minorities whose regions are controlled by the Islamic State and they believe that their return is almost impossible.”

The number of minorities in Iraq has plunged. Iraq's Christian population may have fallen as low as 200,000 within a decade from 1.5 million, and the emigration rate among them soared after IS took over their regions on the Ninevah plains. The same goes for the Mandaeans, whose number decreased by about 80% in the past decade. The situation of other minorities is no better.

The current wave of displacement is not limited to religious minorities. The percentage of Shiite and Sunni Muslims who are emigrating exceeds that of minorities by far. However, minority emigration could lead to their gradual disappearance and cause huge losses for Iraqi diversity.

On Sept. 7, Al-Monitor conducted a phone interview with Jamal Jabbour, an Iraqi writer who had just arrived in Germany seeking asylum. He said, “Each person had his own reasons to emigrate, such as the bad security situation in Iraq, unemployment and the uncertainty of the future. There are many Iraqis from various sects and origins with me in the camp. In addition to the religious minorities, especially Christians and Yazidis, who emigrate the most among Iraqis, there are also Sunnis from IS-controlled regions and Shiites from the south and center, not to mention small groups that lived in mostly Sunni regions like Tal Afar in Ninevah and the Iraqi atheists. Currently, most immigrants hail from hot spots in Anbar, Mosul and Baghdad."

Jabbour described the refugee camps in Germany as chaotic. Residency assistance is solely offered to Syrians. When it comes to Iraqis, minorities are prioritized, especially Yazidis and Christians, followed by atheists, then Sunnis. Shiites have the lowest chances of finding asylum, even though some were displaced from regions controlled by IS and share the same situation as the Sunnis and minorities there.

Joseph Carens, who specializes in immigration and lectures at the University of Toronto, told Al-Monitor, “The measures that were recently taken by Germany and some European countries are not in line with the massive crisis the world is facing with the current immigration waves. The humanitarian responsibility is not limited to European countries. All rich countries that are susceptible to welcome immigrants are also concerned. Societies in general have a huge moral responsibility facing this catastrophic humanitarian situation.”

The recent immigration waves stirred the concerns of political officials and religious authorities in Iraq. Minister of Immigration Jasem Mohamad issued a statement Sept. 5 warning against the repercussions of the departure of Iraqis from their country, especially the dispersion of the most important age group: youths.

Sheikh Abdul Mahdi al-Karbalai, the spokesman for Ali al-Sistani, the supreme religious authority in Iraq, called on the emigrating youths in his Friday sermon Aug. 28 to “reconsider their choices and think about their country and people. The immigration wave threatens to empty the country of its young, cultured and academic minds.” He asked officials to “realize the extent of the crisis and its repercussions on the country" and to "work seriously on reforming the situation.” He also called on them to “set up a conclusive development plan in the economic, industrial, agricultural and services sectors and to seek to replenish the private sector and provide jobs for as many unemployed as possible.”

The bottom line is that in the absence of serious and intensive international cooperation to solve the Syrian and Iraqi crises, emigration is expected to increase further. The unending wave is likely to have negative effects on Iraq and Syria, as well as on the countries welcoming refugees.