Iraqis turn to social media for IS coverage

Iraqis are shunning broadcast and print media in favor of social networking sites to spread and follow news about the fighting against the Islamic State. 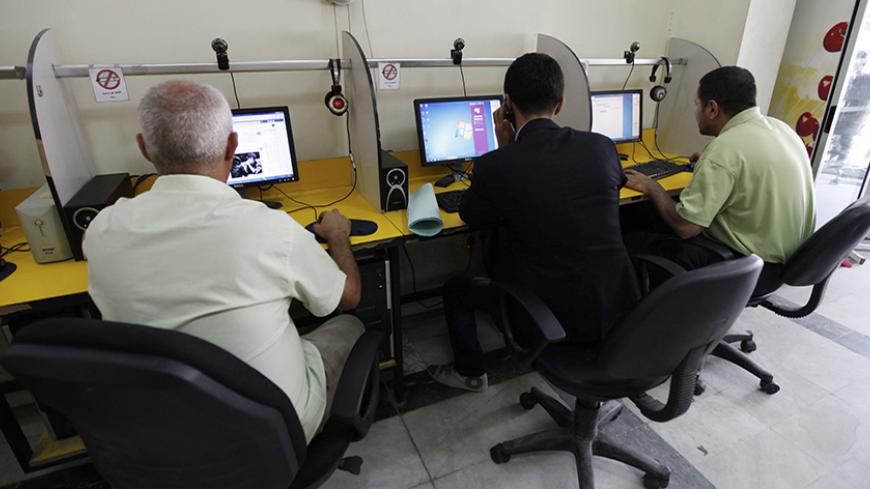 BAGHDAD — A video circulating on Facebook in January 2015 brought to Iraqis' attention “Abu Azrael,” a member of the Imam Ali Brigades fighting alongside the Popular Mobilization Units. The video turned the once-unknown fighter into a legendary figure, with Facebook users adopting him as a symbol of the Shiite fighters' struggle against the Islamic State (IS), which controls almost a third of the country.

Abu Azrael, a jovial muscle-bound man, uses comic and fiery language to refer to the extremist organization. His name soon spread in the Iraqi street, with his popularity also raising the profile for the progress of the Iraqi security forces in IS-controlled areas.

Falah al-Shami, a writer for the al-Mustakbal newspaper, commented on Abu Azrael’s emergence as a popular hero, arguing that it “stems from an urgent need in the community, as he is the first figure to lead in the [current] fighting.” Shami told Al-Monitor, “It is thanks to the youth on the social networking sites that Abu Azrael emerged. He is the qualitative opposite of the figures created by IS.”

War in Iraq is no longer limited to battlefronts. It is taking place on social networking sites as well. It is becoming increasingly rare to find a post shared on Iraqi social networking pages that is not related to military operations.

The poet and journalist Ali Wajih spends about eight hours a day surfing the web and writing postings for his Facebook page about the ongoing battles. Wajih has about 80,000 followers on Facebook and sees himself as engaged in a “media war against IS.” He supports the Popular Mobilization Units, the “young men who left their families and went to fight for the expulsion of IS from areas under its control.”

“The Iraqi media has not lived up to the [magnitude of the] battle yet. The war that is being fought on social networking sites has affected the Iraqi street and lifted its spirits, unlike many satellite TV channels and local newspapers, which broadcast news causing frustration in the community,” he told Al-Monitor.

“I usually only post news from trustworthy sources. I think that the reason behind the Iraqi media outlets’ failure is that they report positive news in an exaggerated way that is not in line with professional standards and does not convey the news accurately,” Wajih said.

Rida Shammari, editor of the al-Mada Press, observed, “The war against IS on social networking sites is not enough.” He told Al-Monitor, “Journalists, unlike other groups, know that networking sites are never enough, even though they are necessary. Whatever the amount of activity and posts shared on networking sites, they never reach the level of professionalism or the quality of the propaganda by IS on those sites,”

Shammari, who through Facebook actively shares security news about fighting along the fronts, said, “There is a group of journalists coordinating and launching campaigns on social networks by focusing on certain aspects in fighting the terrorist organization.” He added, “Their coordination is weak, and they rarely agree on specific ideas, but the few times they have coordinated, the results were amazing.”

Hisham al-Hashemi, an expert on terrorist groups, told Al-Monitor, “IS supporters follow many of the anti-IS accounts on social networking sites, especially Twitter.” He added, “A lot of IS members are tasked with monitoring and following anti-IS accounts to check the accuracy of the presented or refuted news and perhaps get security information that Internet users do not pay attention to but could be useful to IS cadres.”

The disparity is obvious between the audio-visual and print media and the work of bloggers on social networking sites. Social media seems to have the upper hand at the moment, although based on individual efforts without funding. The more traditional media have not risen to the level of reporting fitting for the ongoing battle against IS. This has made them the target of harsh criticism by professional journalists and by Iraqi media watchdogs.