Iraq's Rambo fights against IS

An Iraqi fighter who goes by the name "Abu Azrael" has been made into a legendary, fierce Shiite fighter by the Iraqi media in its coverage of the battle against the Islamic State. 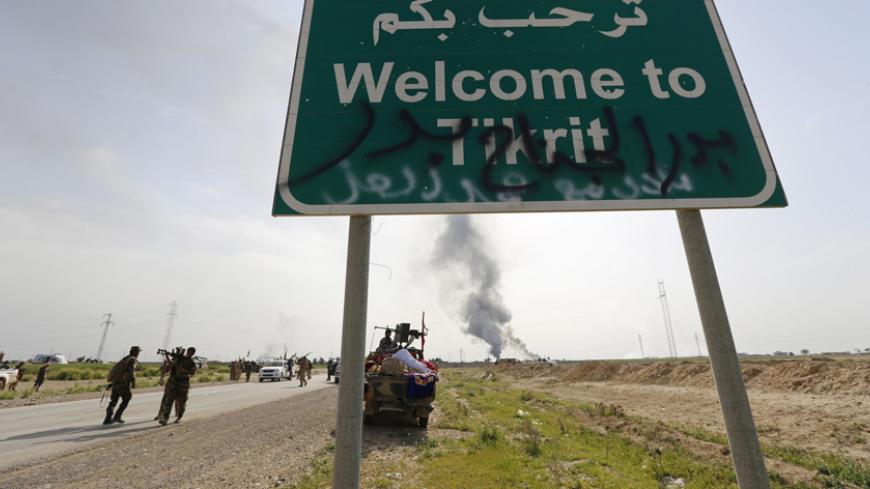 A billboard is seen as smoke rises from a clash with Islamic State militants in the town of al-Alam, March 9, 2015. - REUTERS/Thaier Al-Sudani

The Popular Mobilization Units fighting the Islamic State (IS) have a real-life hero: Abu Azrael, an Iraqi Rambo. He is fighting among their volunteer ranks, supporting the Iraqi army in the battle to retake Tikrit from IS.

Days after IS moved against Mosul, June 9, 2014, Iraqi news outlets and other Arab media organizations honed in on Abu Azrael, depicting him as a fierce fighter battling IS. He sports a short beard, dresses in black and is often armed to the teeth. There have been dozens of videos uploaded to YouTube about the battles in which Abu Azrael has fought alongside the Iraqi security forces and volunteer fighters in Tikrit.

Social worker Mohammad Qasim told Al-Monitor, “The Iraqi Rambo Abu Azrael, with his beard and black clothes as marketed by the media, is the qualitative opposite of IS members, who are characterized by long beards, are always armed and are notorious for their cruelty. … Iraqi Shiites created Abu Azrael as a symbol of their strength by telling stories about his heroic adventures in battle and his invincibility, and as a response to the killings carried out by IS members, who on many occasions brag about killing Shiites.”

As an affirmation of the power embodied in the character of Abu Azrael, a symbol of heroism, young people and others repeat his famous saying, “Now, powder,” meaning crushing the enemy, turning them into powder. The catchphrase has now spread beyond Iraq. An Australian woman appeared in a recent YouTube video repeating the phrase.

Ghayyath al-Kateb, a writer and social researcher, sees the Abu Azrael phenomenon in the context of Iraqi mythology. “This extraordinary and legendary hero is a product of Iraqi thought throughout the ages. Iraqi mythology, across multiple eras, has seen the emergence of many superheroes, the most prominent of which was Gilgamesh, who appears in the epic tale named after him,” he said.

Before Abu Azrael,​ Adnan al-Kaissie was a popular hero among Iraqis in the 1970s. Pictures of the professional wrestler, a media favorite, filled Iraqi homes and streets. Everybody wanted to be like Adnan.

According to Kateb, it is the nature of Arabs, and Iraqis in particular, to create legendary men who accomplish great things. Because of this tendency, political parties in Iraq have tried to exploit the Abu Azrael phenomenon. A number of government ministers and officials have met with him. The local media reported that Transport Minister Bayan Jabr received him March 16.

On the politicization of Abu Azrael, journalist Walid al-Tai told Al-Monitor, “Some political parties are indeed trying to be photographed with Abu Azrael because it could bring them political and electoral gains.” At the same time, however, according to Tai’s information, “Abu Azrael refuses to belong to a political party.”

Halim al-Yasiri, a researcher in Iraqi social affairs, spoke to Al-Monitor about the psychological aspects of Iraqis’ elevation of Abu Azrael, stating, “Iraqis invented Abu Azrael to compensate for the Iraqi army’s defeat in Mosul, after it was invaded by IS.” Yasiri said he has “seen up close how the name Abu Azrael triggers enthusiasm in the hearts of fighters and pushes them to fight fiercely.”

Researcher Mohsin Ali Attia told Al-Monitor, “During adversity and difficult situations, one takes refuge in the imagination as a means of salvation from the nightmare of reality. The popular imagination weaves images and produces myths and produces a hero to be used as a role model to alleviate the despair. Sometimes this symbolic hero is real, as in the case of Abu Azrael.”

Abu Azrael’s story goes that he is a university professor in his 40s and a former Taekwondo champion. He left his job as a physical education teacher at the University of Baghdad and joined the volunteer fighters heeding the fatwa issued June 13, 2014, by Grand Ayatollah Ali al-Sistani to defend Iraq against IS.

Some are less enthusiastic about the phenomenon of manufacturing heroes in an environment of war and tragedy. Writer Ali Serhan told Al-Monitor, “Inventing a hero amid an environment flooded with blood is not surprising. … Heroes have always been born amid lakes of blood, since the dawn of man on Earth. Iraqi hero creations are not free of distortions.” According to Serhan, “The Abu Azrael phenomenon is an example of propaganda. Sectarianism and chauvinism do not create national heroes.”

Regardless of one’s position toward the Abu Azrael phenomenon, it seems that the Iraqi media has become addicted to the current superhero and is expected to continue to focus on him as long as it serves the objectives of the battle that Iraq is fighting against IS.