Iran wages psychological war against IS

Iran is waging a psychological war against the Islamic State in Iraq, promoting and highlighting the prominent role of Iraqi fighters among the country's paramilitary groups. 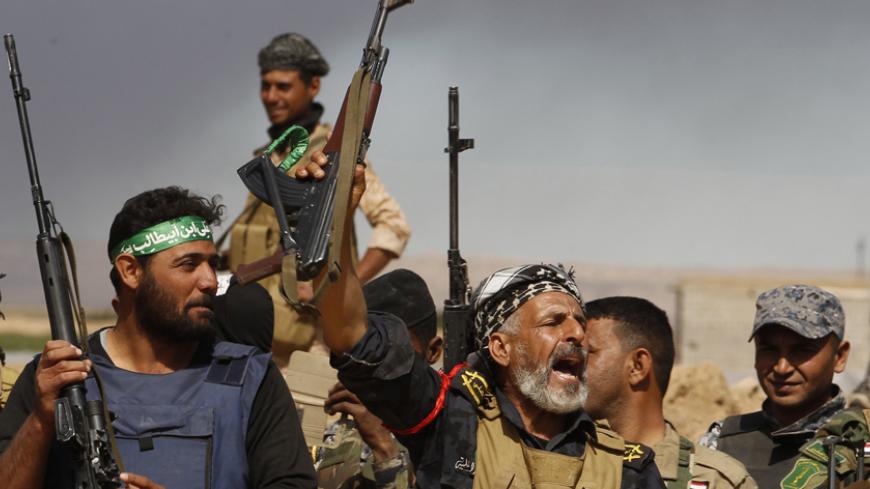 Shiite fighters chant slogans as they advance into the town of Tal Ksaiba, near the town of al-Alam, March 7, 2015. - REUTERS/Thaier Al-Sudani

The fight between the Iraqi government and the Shiite paramilitary forces on one side, and the forces of the Islamic State (IS) on the other, has entered a new phase in the past three months: a transitory balance of power. Paramilitary Shiite forces and the Iraqi army, with the direct support of the Islamic Revolutionary Guard Corps (IRGC), have managed to drive back the forces of IS in areas bordering Iran as well as areas to the south, east and north of Baghdad. Overconfident after their recent victories, the Shiite forces, under the supervision of Gen. Qasem Soleimani, launched a vast military operation with 30,000 soldiers to reclaim Tikrit, the birthplace of Saddam Hussein.

In reality, both Tehran and Baghdad will lose more than they will gain if they conquer the central areas of Tikrit. Tikrit is a Sunni city with a long tradition of pro-Arab and pro-Baathist attitudes. A member of the Badr Brigade who wishes to remain anonymous told Al-Monitor, “We don’t want to make the same mistake that the Americans made during the Fallujah operation. The public opinion among the Sunnis is clouded thanks to IS propaganda. Tikrit is a sensitive place and a symbol of Iraq’s Sunni Arab identity. We have IS forces under complete siege in the center of Tikrit, so we have already achieved our military objectives.”

During the Tikrit operation, the Imam Ali Brigade played a more active role alongside the Iraqi army and the Badr Brigade, compared to other paramilitary groups. The Imam Ali Brigade announced its formation in July 2014, during a military operation in the city of Amirli near the Iranian border. Among the unique characteristics of this group are their black uniforms and their modern, Western equipment.

Members of this group, unlike other paramilitary groups, use M4 weaponry. Most members of the Imam Ali Brigade are trained and, in a way, considered special paramilitary forces. Their commander, Shabal al-Zaidi, was a former member of Iraq's Mahdi Army, led by Muqtada al-Sadr. Their flag is also interesting, featuring a map of Iraq and the motto "Harakat al-Iraq al-Islamiya" (Iraq Islamic Movement). On each side of the green map is a zulfiqar, the legendary sword of the first Shiite Imam Ali, and in its center is a graphic depiction of Imam Ali's Shrine covering all areas of Iraq, including its Sunni regions.

Muhandis is another Imam Ali Brigade commander. He has close ties with the IRGC and was pursued for years in Iraq because he fought against the American forces. Muhandis, who goes by the pseudonym Jamal Jafar Mohammad Ali, became famous because of his alleged involvement in the 1983 bombing of the US Embassy in Kuwait and the attempted assassination of the emir of Kuwait in 1985. Lebanon's Hezbollah and Iraq's Dawa Party are believed to have had a hand in these two operations.

However, another member of this group, known as Abu Azrael, has recently become famous and is now considered the symbol of this group. His real name is Ayub Zirjavi and he is part of al-Zirjavi tribe. He is very sturdy, has hard features and a long beard. When images were published showing him in uniform, alternately holding a sword or an ax, his fame only grew. He walks the streets of Tikrit holding a sword, challenging IS forces to come and fight him.

Abu Azrael's motto is: “Ela tahin,” meaning, “Grind them into flour.” His Facebook fan page has more than 356,000 likes, and several other Facebook pages supporting him have a separate 200,000 likes. He is a beaming character who smiles in most of his videos, which make fun of IS. His Facebook page features videos showing young men and women, from China, Pakistan and Iraq, declaring their support for him. Also, the Iraqi minister of communication and transportation has had an official meeting with Abu Azrael.

Abu Azrael, the symbolic hero of the Shiite militias, has ties with Iran. Similar to Rambo, he is depicted in various iconic situations: in a helicopter, behind heavy machine guns, on a tank and next to children. Again similar to Rambo, he wears a headband and is a source of hope for the forces during hard times. However, this soldier is more important for his role in psychological and diplomatic operations than in the battlefield.

The Quds Force, in its fight against IS, has taken note of the US Army's experiences in Vietnam. Similar to the Vietnamization of the Vietnam War, the IRGC is seeking the Iraqization of this latest war. By doing this, IRGC is planning to prevent Sunni Arabs from reacting negatively to the Iranian military presence in Iraq. All the while, the quality and quantity of Iranian weapons in Iraq increases on a daily basis.

Promoting a figure like Abu Azrael, who has unique physical characteristics and military skills, is an attempt to lift the spirits of the demoralized Iraqis. The second goal is to create an alternative to IS on social networks.

Iran’s current strategy in Iraq is to provide complete political support, have a strong advisory role, have a light military presence, provide logistics, organize the Iraqis ideologically, undertake the Iraqization of the war and engage in myth-making. Whether or not this strategy is going to be successful in the next few months depends on how Sunnis react to IS being defeated, how the Tikrit issue will be handled and what are the military, political and security costs of retaking Mosul.