To provide better coverage of the Mosul operation and fight the Islamic State propaganda, several Iraqi media outlets have joined a media alliance. 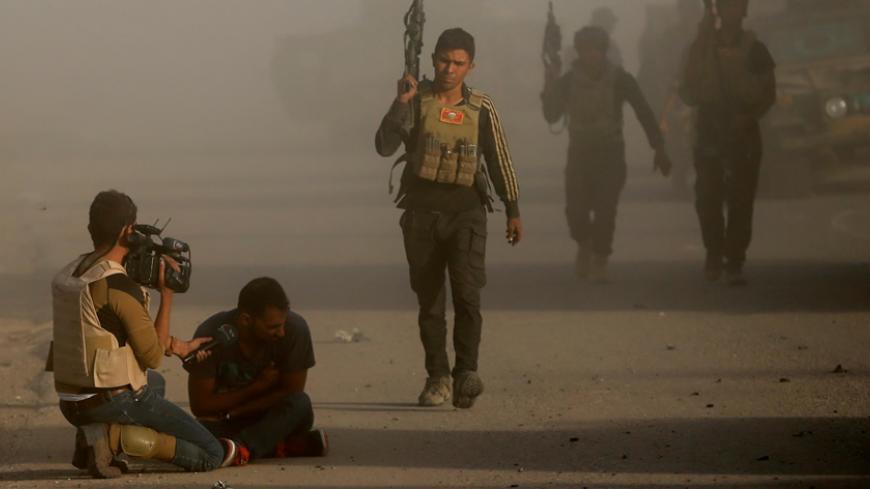 An Iraqi journalist reacts after an Islamic State suicide bomber attacked an Iraqi special forces unit with a car bomb during clashes in Bartella, east of Mosul, Oct. 20, 2016. - REUTERS/Goran Tomasevic

BAGHDAD — With the beginning of the battle to liberate Mosul, several media outlets, including governmental and private media, decided to wage a media battle against the Islamic State (IS) by establishing the National Media Alliance on Oct. 17 to support the operations to liberate Mosul.

This came as a response to IS propaganda, which has been conducting an extensive media campaign through its personal pages on social networking sites, where the organization wages psychological warfare, recruits fighters and attracts supporters.

The media alliance includes several media institutions, including the Iraqi Media Network, which represents the government view and operates TV channels such as Al-Iraqiya and the popular Iraqi private channel Alsumaria TV. The alliance relies on a unified plan that is carried out in a joint operations newsroom, reporting on the battles and providing technical and journalistic services.

The media of the Popular Mobilization Units, representing dozens of the militant factions, joined the media alliance Oct. 18.

However, retaliating against and challenging IS at the media level was not the only reason for establishing this media alliance, media figure Walid al-Tai told Al-Monitor.

He said, “One of the reasons behind the establishment of the alliance is to avoid any chaotic media coverage of the battle as every media and military institution is sending its correspondents to battlefronts. This leads to conflict in the coverage of the fighting and a greater number of casualties among journalists.”

Ali Raysan, a photographer of Alsumaria News, was gunned down by an IS sniper Oct. 22 during the ongoing Mosul battle, and Ahmed Hajer Oglu, a media officer in the Turkmeneli TV news department, was killed in the Tes’in area in central Kirkuk on Oct. 21.

The undeniable reality is that journalists are frequently targeted in Iraq. A New York Times photographer was wounded by a car bomb in the battle of Bartella on Oct. 20. Six other journalists were also wounded, including an American, while covering the Mosul battle. This is not to mention reporters affiliated with WAAR media and Reuters who also were injured. A correspondent for the Kurdish news agency Zagros was shot by IS snipers in the village of Kabrook.

To reduce casualties among embedded journalists and reporters, “Military leaderships ought to ban them from being present on the battlefields without the necessary safety precautions such as wearing helmets and bulletproof vests,” Col. Abdul Hamza Hassan Ali, who is involved in the ongoing battle, told Al-Monitor.

Ali said, “Coordination between the military units and the National Media Alliance is of paramount importance.”

For his part, Haider al-Amiri, a journalist with the Iraqi Foundation for Media and International Relations, told Al-Monitor that the alliance is “a successful step to unify and provide accurate information.” He said, "The Iraqi Media Network has endorsed this project, which would contribute to compensating for the weak capabilities of the media institutions’ correspondents.”

Hadi Merhi, the director of the Iraqi Observatory for Journalistic Freedoms, criticized that correspondents of the alliance enjoy priority over other journalists and receive support from Iraqi forces. He told Al-Monitor, “This is unacceptable, even if the alliance includes a group of media institutions. Everyone in the media should have the opportunity to cover the fighting.”

The Peshmerga Ministry in the Kurdistan Region on Oct. 23 banned the Turkish NRT agency from covering the ongoing battles in the city of Mosul, accusing it of “disdaining” the troops.

During the events of the Mosul battle, the media alliance has launched press releases, hashtags, blogs on social media and deployed reporters and photographers to different spots on the battlefronts.

Commenting on the feasibility of the media alliance, Showan Dawudi, a member of the parliamentary Culture and Information Committee, told Al-Monitor, “The media alliance does not mean dispensing with the services of embedded journalists and reporters, who have played a prominent role in all the battles waged by the Iraqi army against IS since 2014.”

He said, “It is important at some point to preserve the independence of news coverage and promote neutrality so that the facts are relayed to the world without any interference. There is a need for a sophisticated, impartial media to showcase IS’ crimes in Iraq."

Journalist Nassar al-Kurity of the Iraqi Media Network had a different take. He told Al-Monitor, “The media alliance is heavily present on the battlefields as it has turned into a source of stories for the mass media. The alliance, although run by the state-funded Iraqi Media Network, remained impartial while covering the details of the Mosul battle.”

He added, “The alliance has managed to tap into the Iraqi media capabilities to report live from the battlefields as many journalists have left the office to go into the field. However, we still have a long way to go to turn the Iraqi arena into a more professional and safe environment, and to a better assessment of Iraq in international forums as it is considered one of the most unsafe countries for journalists and reporters.”