Iran, Sudan fall out over Yemen

The Saudi Arabian-led coalition against the Houthi rebels in Yemen has tested the decadeslong ties between Iran and Sudan. 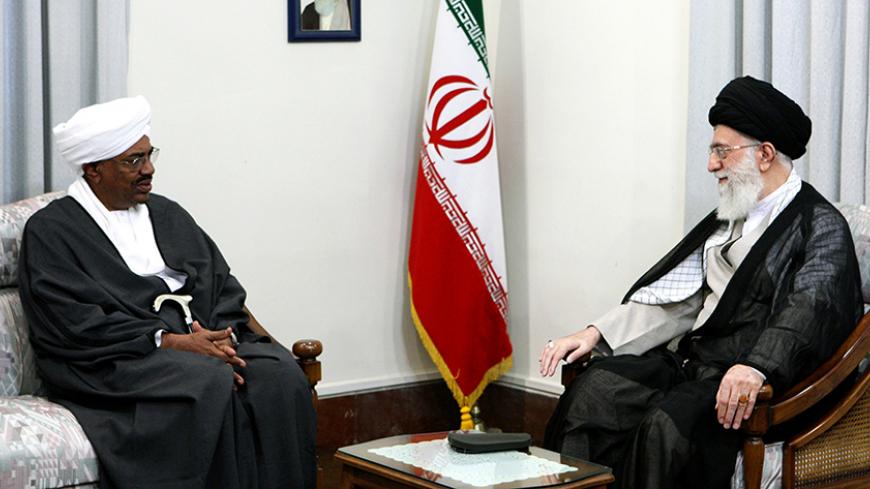 When Saudi Arabia announced its coalition for the bombing campaign of Yemen nearly a month ago, the inclusion of Sudan must have raised eyebrows in Tehran. Iran and Sudan, while never strategic allies, have in the last few decades established varying degrees of military, economic and religious ties, much to the discomfort of Western countries and Arab countries in the Persian Gulf.

Sudan has reportedly benefited from Iranian military and financial aid while Tehran sees Sudan as its gateway to Africa, allegedly for weapons smuggling, but also through funding of Shiite cultural centers and mosques in the mostly Sunni country.

The first sign of major differences between the two countries appeared in September 2014, when Sudan ordered all of Iran’s cultural centers to be closed and gave Iranian diplomats 72 hours to leave the country. Iran’s Deputy Foreign Minister Hossein-Amir Abdollahian initially denied the news and said “some want to destroy the good ties between Tehran and Khartoum.” However, the website for Sudan’s Foreign Ministry confirmed the news.

At the time, no reason was given for the closure of Iran’s cultural centers, but Sudan has always maintained a relationship with Sunni Arab countries in the Persian Gulf, particularly Saudi Arabia, Iran’s main political and religious regional rival. Just one month after the closure of the Iranian centers, in an interview with Saudi-funded Asharq Al-Awsat, Sudan’s President Omar al-Bashir denied ever having a strategic relationship with Iran, saying, “What the Saudis have been told about our relationship with Tehran has been exaggerated.”

Bashir also denied that Iran’s cultural centers were closed as a conciliatory move for Sunni countries but did say, “There are Shiites in Iraq, Lebanon, Syria and Yemen, among others, [but] we cannot allow them to have a presence in Sudan.”

Iran officially has opposed the Saudi coalition against the Houthi rebels, who are Zaydi Muslims, an offshoot of Shiite Islam. Saudi officials claim their attack on the Houthis is aimed at rolling back Iran’s regional influence in Yemen. While Iranian officials have not been vocal about Sudan joining the Saudi coalition, a number of media have covered Sudan’s about-face, some in harsh terms.

An article by hard-line Mashregh News conveyed that despite Iran’s help throughout the years, Bashir “found a better meal and traded Iran’s generous help for a seat at Al Saud’s table.” The article stated that given Sudan’s closing of Iran’s offices, maybe Sudan’s support for Saudi’s bombing of Yemen was not unexpected, but “at the same time, everyone who is aware of our country’s support and help of [Bashir] during the most difficult times of his rule, did not expect this level of political immorality and obscenity.”

Mashregh said that it wasn’t too long ago that Saudi Arabia would not even allow Bashir to fly over Saudi airspace. Bashir was invited to President Hassan Rouhani’s inauguration in August 2013, but Saudi Arabia refused to allow Bashir to fly across its airspace and forced him to turn back his flight. Bashir is wanted by the International Criminal Court for war crimes.

Iranian analyst Hadi Zargari wrote on the Tabyin Strategic Think Tank website, "Sudan's policy in joining the Arab coalition against Yemen shows a change in foreign policy, and not only is it not tactical, but it indicates a serious transformation in their approach on regional issues."

Zargari explained that while Sudan is an African country, it is strategically an important country for the Middle East on par with Iran, Saudi Arabia and Turkey, particularly with respect to issues such as Palestine and Yemen. He wrote that despite pressures from the West and Arab countries, Iran and Sudan have had a “deep and complex” relationship, which has resulted in a cold relationship with Saudi Arabia for Sudan.

However, Zargari argues that in the last year and a half, Sudan has changed its regional policies by distancing itself from Hamas, despite Sudan’s anti-Israel position, and by attempting to build ties with Egyptian President Abdel Fattah al-Sisi, despite Sudan’s previous support for the Muslim Brotherhood. Both of these moves align Sudan with Saudi foreign policy. The closeness with Sisi resulted in better relations and communications with the Saudis, Zargari said.

Zargari believes that Bashir shifted the country’s foreign policy away from Tehran and toward Saudi Arabia because Sudan’s “domestic problems played the determining factor.” Losing 75% of its oil to South Sudan after independence in 2011 has forced Sudan to secure its economic needs and seek economic aid, which explains why Sudan joined Saudi Arabia’s coalition against Yemen, Zargari wrote.

While it may not be exactly clear what has resulted in Sudan’s change in foreign policy, Iranian analysts seem to believe this is a strategic and long-term shift. This was a decadeslong relationship for Tehran and one it cannot replace easily, which explains some of the anger in the Iranian media by hard-line outlets.