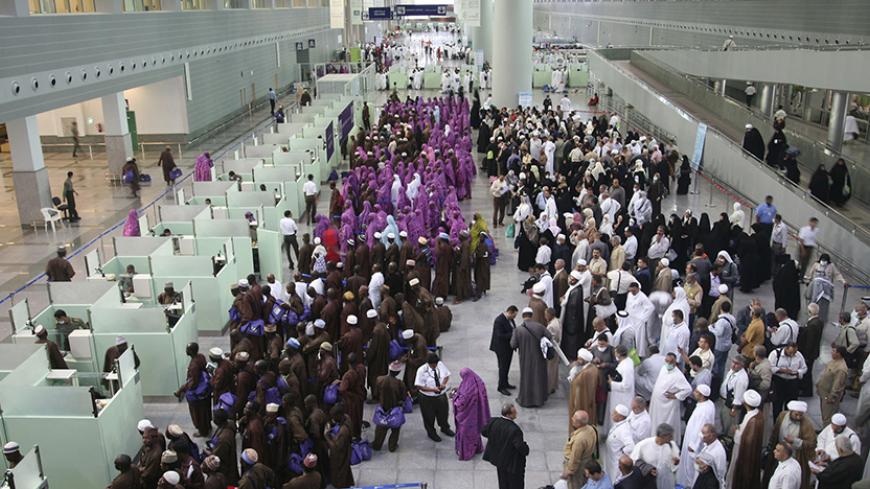 Iran has suspended flights for pilgrims to Saudi Arabia over accusations that two Iranian youths were assaulted at the airport in Jeddah by Saudi security officers. The alleged incident has exasperated tensions between the two regional rivals that are at odds over a number of regional wars.

Iranian Minister of Culture Ali Jannati said on April 13 that the decision was made to suspend the flights for umrah pilgrimage over the incident in which “the nation’s public honor has been tainted.” Umrah pilgrimages are not mandatory in Islam and can be made at any time.

Jannati said that the Saudi authorities have arrested the two accused, and “they even said that the offenders will be executed.” Saudi media have not covered the case, and the Saudi Embassy in Washington told Al-Monitor on April 10 that all they have heard of the accusations was from the Iranian press.

On April 6, after days of rumors in the Iranian media, Deputy Foreign Minister Hassan Ghashghavi told reporters that in the second week of the Nowruz holidays (March 28-April 2), while “returning from umrah pilgrimage, authorities took two teenagers from their caravan and conducted a body search.” What allegedly happened afterward was described by Ghashghavi as being “similar to rape.”

If the Saudi authorities are indeed pursuing the case it is not clear what has prompted Iran's decision to suspend the flights. However, on April 9, Saudi Arabia denied an Iranian airplane carrying 260 pilgrims from landing. There has also been pressure on the Iranian government from various political figures to suspend umrah pilgrimage until the accused are punished. On April 8, 70 members of Iran’s parliament signed an emergency bill demanding that Iran suspend umrah pilgrimages until the safety of Iranians can be guaranteed.

On April 11, protests took place outside the Saudi Embassy in Tehran, which saw a diverse crowd and did not appear to be sponsored by any of the Student Basij organizations that often organize these types of protests.

The suspension of umrah pilgrimages cannot be taken lightly. The last time Iranian planes with pilgrims were prevented from landing in Saudi Arabia was in 1987, when during the hajj pilgrimage hundreds of Iranian pilgrims and dozens of Saudi police were killed during protests.

In his statement, Jannati also addressed a long-held complaint by Iranian Shiite pilgrims visiting the Sunni country. He said that grand ayatollahs had “expressed concern [over the alleged incident], especially since in the past there has been harassment of pilgrims and clerics.” On April 8, in response to the accusations, Grand Ayatollah Naser Makarem Shirazi said, “I don’t want to boycott umrah pilgrimage but I want to state this: Should we continue at any price? They insult our clerics at the prophet’s mosque and insult us at the airports, we should not be humiliated like this.”

Iranian media have given the incident extensive coverage. On April 8, conservative Vatan-e Ermrooz interviewed the fathers of the victims, who both said they are unhappy with the way the Iranian officials have handled the case. “I think this crime was not a crime against one person or a family, it was the crime of one government against another government,” one of the fathers said. He added, “Our children were violated as Iranian Muslims, now what are our officials going to do about this?”