After nuclear deal, what's next for Iran?

In the run-up to the comprehensive nuclear agreement with Iran, it is time for the United States and Iran to ease the political and security issues, which in turn will improve trade, technological and economic relations. 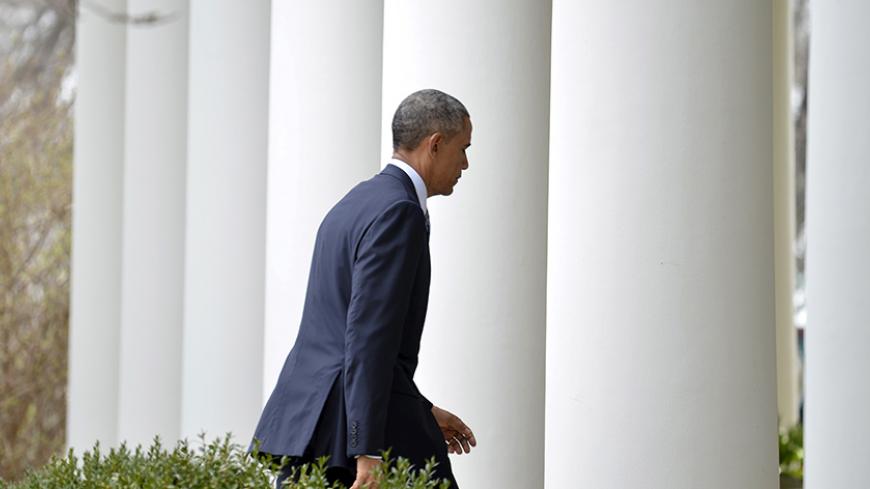 US President Barack Obama walks back to the White House after speaking about the framework agreement on Iran's nuclear program announced by negotiators in Switzerland, in Washington, April 2, 2015. - REUTERS/Mike Theiler

The historic political framework between Iran and the world powers April 2 in Lausanne, Switzerland, on Iran's nuclear program — to be developed into a comprehensive agreement by the end of June — has indeed changed the entire landscape.

After more than a decade of roller-coaster talks, mostly marked with failure, both sides have finally arrived at a formula that would assure the international community of the strictly peaceful nature of Iran's nuclear activities, and terminate all unilateral and multilateral economic and financial nuclear-related sanctions imposed on Iran.

This historic overall understanding — whose quite complex details involving a whole lot of parameters and nuances to be negotiated and articulated in the form of legally binding documents before the deadline — has been rightly lauded by almost all as the framework for a diplomatic resolution of a seemingly intractable international problem, which, if left unresolved with inevitable further festering and complication, could have led to a possible new war in the Middle East with all its catastrophic consequences. US President Barack Obama, in an unmistakable effort to convince the colorful doubters and opponents of the superiority of the diplomatic recourse, clearly referred to the option of war as one of the three possible avenues for resolving the nuclear impasse.

While the political framework reflects the commitment, hard work, sound judgment and, above all, political will of all the parties involved — Iran as well as and the United States, United Kingdom, France, Russia, China and Germany — it has been the direct interaction between Iran and the United States, the main two protagonists, particularly since September 2013, that has helped steer the process of negotiation toward the positive outcome. In a detailed discussion in my book “Iran and the United States: An Insider’s View on the Failed Past and the Road to Peace" — covering more than 30 years of deeply felt and entrenched mutual distrust, hostility, name-calling, tension, tit-for-tat negative policies, measures and actions aimed at harming the other side — I have tried to depict an objective picture of the state of relations, or lack thereof, between the two capitals, including the numerous missed opportunities at rapprochement and ultimate detente between them. This particular aspect of the matter has not escaped the attention and eyes of pundits and keen Iran observers, including William Burns who has been personally involved in the nuclear talks for years.

While the drama over the nuclear talks will continue for the next three months until the comprehensive agreement is reached and goes into effect — with all its expected and inevitable complications and haggles over each side’s interpretation of the practical ways and means of the implementation of the agreed provisions — we have to look at how the state of interaction between Tehran and Washington will, or should, develop in the post-nuclear period.

There exist ample grounds — and reasonable justification — for the two countries to overcome the unsavory history of distrust and hostility, leave the bitter past behind and move in the direction of resolving the outstanding issues and difficulties that have kept them apart and hampered such a move. I grant that jumping the hurdle is neither easy nor can be achieved overnight. However, aside from particular bilateral issues that might either not be considered immediate or urgent, the tumultuous, and in fact, ever conflagrating situation in the Middle East and the Persian Gulf area can hardly afford the continuation of Iran-US hostility and tension.

The long catalogue of possible areas for cooperation — similar to the 2001 and 2003 episodes in Afghanistan and Iraq — includes, and is definitely not limited to, the fight against the Islamic State in both Syria and Iraq, the protracted Syrian crisis and the unfolding crisis in Yemen. Iran-US cooperation in combating extremism and terrorism and drug trafficking in the Middle East, as critical areas of serious concern to both countries as well as to the peace and security throughout the region, can also serve as practical catalysts for gradually ameliorating the state and sentiments of distrust and suspicion between the two states.

The positive future-looking pronouncements by high-level officials in both capitals since the Lausanne deal, even if peppered with allusions of sorts to the long and lingering shadows of the past, appear to augur well — potentially, of course, for less-tension-ridden days on the horizon. Gradual easing of tension between the two countries on political and security issues, as is widely seen by experts and analysts, both Iranian and American, can also create the necessary ambiance for gradual expansion of trade, technological and economic relations, which have been eagerly anticipated by the private sector, entrepreneurs and investors in both countries. The potentials in these fields are tremendous indeed.

As I look back at the actual track record during the past 3½ decades, I can reckon, with a sense of certainty, that both sides need to back words with action and simply do not allow opportunities to be missed again. Based on hard-won experience and insight, I believe honest commitment to and compliance with the provisions of the framework agreement by both sides, despite the grumbles and subversive activities of naysayers and opponents, will ensure achievement of the comprehensive agreement in due time.

“Such nuclear negotiations provide an experience to test the possibility of talking on other subjects if Washington puts aside objections,” Iran’s supreme leader, Ayatollah Ali Khamenei, said after the Lausanne talks.

Perpetuation of the same spirit and commitment to the full implementation of the provisions of the final deal — once it goes into effect — will certainly help weaken the bitter feelings of the past and promote, over time and even if in small measure, a sound foundation for moving forward toward what I have termed all along as "rapprochement and detente" between Tehran and Washington. It is not easy, but it is doable.