The dangerously low-quality wheat imported from Russia that plagued Egypt during the Mubarak era has returned to the country, which recently identified 25,000 tons destined for Egyptian bread. 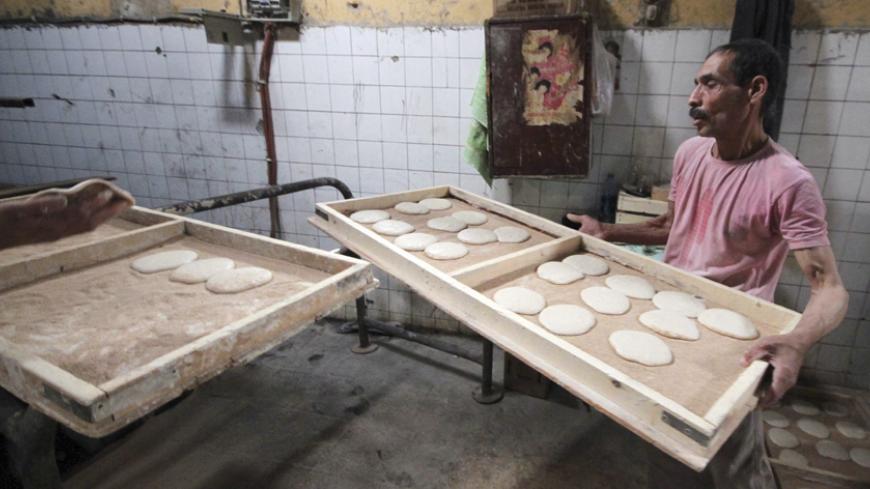 CAIRO — The Russian wheat crisis resurfaced in Egypt on April 1, when 25,000 tons of it were discovered en route to being used in government-subsidized bread production.

The tainted wheat — which contains toxic and cancerous elements and dead insects and cannot be consumed — was among the most dangerous issues that raised the ire of the Egyptian street under the regime of President Hosni Mubarak. Its wide distribution to mills and bakeries was discovered in 2009.

Egypt is one of the largest wheat importers in the world, taking in between 7.3 and 8.2 million tons annually from Russia, the United States, Ukraine and Kazakhstan.

Cairo is currently facing a crisis threatening to increase its wheat bill in the wake of restrictions imposed in February by Russia, the fourth largest wheat exporter in the world, on its wheat exports in accordance with rising domestic prices. Meanwhile, Moscow is facing a financial crisis linked to the decline in oil prices and to Western sanctions.

Over the years, while prices rose and wages stagnated, millions of Egyptians have gotten used to standing in line for hours in front of bakeries for subsidized bread. Meanwhile, the successive governments have failed to control the subsidized bread system, and trafficking spread on the black market. Wheat was always limited, and the citizens crowded into the bakery lines to the point of violence.

Although the current regime put forth a new smart card system in January 2015 to distribute bread based on family size, the government is still unable to meet the needs of all its citizens, and the situation is still volatile.

Because of this danger, Egyptian officials rushed to calm the public by confirming that the tainted Russian wheat was not being used in government-subsidized bread production, but rather in the production of baked goods and grain products of a single private company. Many in Egypt are skeptical.

A political researcher and writer specializing in international relations, Nash’at Aldihi, told Al-Monitor that the government's justification was valid, as issues like this one are no longer acceptable following the Egyptian revolution. “The government, however, remains responsible for the entry of tainted wheat, be it destined for private or public production, and the state should [protect] all the goods offered to the citizen,” he added.

Aldihi explained that the deals for Russian wheat that entered Egypt before 2011 were marred by a great deal of corruption involving prominent figures of the Mubarak regime before its fall, including Minister of Economy Rachid Mohamed Rachid and his collaborators, as well as many wheat importers who profited from these corrupt doings.

"These issues that might negatively affect the current Egyptian regime were expected to be resolved following the revolution. But unfortunately, some parties within the current regime are messing with the lives of citizens in an attempt to undermine the [regime’s] plans,” he continued.

Aldihi stressed the need to purge the government of those working to restore specific parties to the scene, namely the National Democratic Party administration, whose members serve their own interests. The government must assume its responsibilities and face the situation whereby importers take samples of local wheat and deliver them to regulators, who are led to think that the samples are taken from imported batches, he said.

He went on to explain that Egyptian-Russian economic ties are not likely to be affected by the return of this crisis because of the political coalition that relies on military, political and economic coordination between both countries. Meanwhile, Russia is suffering from the sanctions imposed on it following the crisis over Ukraine, while Egypt is facing organized terrorism and harsh Western criticism over the human rights situation in the country.

Moscow had accused Egypt of damaging the reputation of Russian wheat in 2009 after the Egyptian attorney general's decision to detain several shipments in Egyptian ports and refuse them entry for containing toxic and cancerous elements. The Russian side said that there is a range of grain quality in Russia and that high-quality grain is available if the buyers are ready to pay for it, but the Egyptians are buying cheap, low-quality grain.

Adel Amer, director of the Egyptian Center for Economic and Political Studies, told Al-Monitor that the issue is the result of the continuing weakness of local Egyptian supervision, which provides the opportunity for dishonest importers to import cheap, poor quality wheat at a 125% profit.

Amer confirmed that the tainted wheat left poor citizens suffering from various diseases and poisoning in 2009 and 2010, especially in the province of Kafr el-Sheikh, after the Russian wheat volume reached 50% of the total imported by Egypt for the production of subsidized bread. At the time, the public prosecutor referred the officials to court, but the phenomenon has unfortunately resurfaced.

Amer called on the Egyptian government to take swift legal action to hold those responsible accountable, and explained that the return of this crisis will have no impact on Egyptian-Russian political relations.

“There are other circumstances currently controlling the relationship between the two countries in light of the Russian arming of the Egyptian military and Russia's desire to emerge as a strategic ally of Egypt after an absence of nearly 30 years,” he added.

The right to bread was one of the three demands behind the January 2011 revolution that uprooted Mubarak's regime. Egyptians took to the streets with unified demands that started with "bread" (food), then freedom and social justice. Are the citizens to live off the same wheat destined for animals in Russia? This case merits deep consideration by the Egyptian government.